When old school gaming is discussed, there is usually a preference for a Sandbox style approach to campaign design. What exactly is 'Sandbox'?

According to the RPG StackExchange website, (excerpt quote) "a campaign that does not have a specific prescribed storyline, but one where the GM sets up a world (or at least a small section of one) and the PCs are free to wander where they will, and find adventure where they will. It's about freedom of choice."

While I am sure we can all agree there is a bit more to it than that (and there is - you are more than welcome to read the linked article), I think we can also agree that this is the essence of the idea.

New school games are often referred to as Story Games. What does that really mean?

According to the RPG Glossary of the well known website BoardGameGeek.Com (which incidentally has no reference in its glossary for 'Sandbox'), Story Games (quoted) "are RPGs which focus more on the overall story than character building or rules enforcing. Most RPGs can be made to be more story driven given the predisposition of the GM/Players, but clearly some RPGs are more tailored to this style of play."

When I read or hear discussions about these two avenues of gaming I often feel like an alien trying to comprehend Human thought processes. I don't see the two as separate or different in the way others do. I understand the two descriptions above but they honestly do little to explain to me why the two do not function in tandem all the time.

I am then reminded of something my friend Dave said recently, my friend Martin said many years ago, my friend Will said in high school and another friend said to me in junior high school..."Most GMs don't think like you."

So if my style is so unusual (which in truth I don't think it is), it needs a name. If its got a story and it's a Sandbox, I will call what I do...Storybox gaming.

How Does Storybox Gaming Work?

When I design a campaign, one of the first things I do is think of a good story. Something with a strong, basic premise that I can elaborate on during the campaign.

Next, I create between three and five smaller stories, subplots if you will, and place them in different places on my Storybox world/sector map. Very often (95% of the time), these subplots are based on ideas or background material supplied to me by the players participating in the game. This gets them directly involved in the game should they come across the subplot. More about that in a moment.

Now my world map (or sector map or city map or whatever type of map I need for the genre) is given some general parameters (the Elves are in this place, the galactic frontier is to the left of the map, this part of town is the factory and warehouse section, etc.) and I create or assign some adventures to each part of the map along with where the PCs can find elements of the main plot and subplots.

The PCs are then welcome to explore the map as they like. They can also ask an NPC what is happening of interest in their present locale. They can also go to a tavern/spaceport bar and pick up rumors or get hired by a mysterious patron. Looking for wanted posters and trying to bring in bounties is also a common past time in many of my games (especially the earlier ones when we really didn't know the difference between the 1100s and the 1800s).

Here you have the typical Adam game.

It starts with a map whose general layout is known but its specifics aren't. 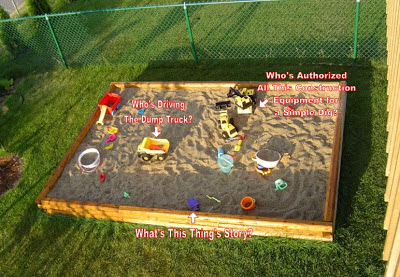 You can go anywhere on the map your current mode of transportation can take you to. You are limited only by your mode of transport (from feet to starship in some settings) and the time it takes to get where you're going.

Some of the locations on the map, unbeknownst to the players and their PCs, will unlock a major plot or subplot. New stories that happen on the fly lay in waiting in every location that isn't already harboring a plot point. All plots are either general and design to be detailed as we progress in the campaign or they unlock a pre-planned adventure (for example: On Aerth there is a place called 'The Borderlands'. A Keep is located at the Northern Edge of the region. The Borderlands extend to the South and Southwest. Stop off at the Keep and you've stopped at 'The Keep on the Borderlands' and unlocked the potential of running through Module B2).

As the players and their PCs display interest in various elements of the campaign, the game's story (or stories actually) change, contract and expand, allowing the parts that excite the group to gain importance over ones that just don't tickle our collective fancy.

This goes for NPC relationships as well. Those NPCs that the PCs like working with and talking to become reoccurring guest stars. Others  may appear once or twice but if no one goes to see them again they are 'written out' of the campaign in favor of new ones.

I could go on and on about this subject and I will probably end up writing a follow up to this post before long but for now, that is a good summation of how I do things. I do not view Sandbox games and Story Games as things that are mutually exclusive and I never have. I see all my games as a combination of the two.

My Sandbox has stories buried somewhere inside it. My stories can go anyway you want to take them.

There are no locks on Storybox...