Nothing irks me as much as inconsistency. My own that is.

Although I understand intellectually that not every session is going to be perfect, or 'the best session I've ever run', it still bothers me when there is such a significant difference in quality from a given session to the next.

I mean, I've been doing this a long time. I've run literally, easily, hundreds upon hundreds of RPG sessions for dozens, and dozens of people of all ages, races, genders, and backgrounds. I've run at schools, homes, parties, and conventions. By this point in time, you'd think I would have running sessions down to a science. You'd think a successful game is pretty much a given.

A weekend, or so ago I ran the penultimate session of The Barking Alien Gaming Group's three-year, thirty-six session, classic Traveller campaign, Traveller - Operation: PALADIN. This was the last episode prior to the big finale in December.

There were some issues, most of which have plagued this particular group in one form, or another for some time now. There were also some factors unique to this particular day (a few people were running late, myself included, one had been working over time for a few days prior, that sort of thing).

The main issue I had with the session was that it meandered at the onset, as well as right before the end, and felt very light on drama, and emotional resonance.


There's espionage, giant robot battle armor, futuristic guns, spaceships, aliens,
psychic powers, loved ones in danger, romance, and the threat of all out war!
You'd think it would be more exciting.


It not only sucks because, hey, who isn't hoping for excitement, emotional impact, and dramatic weight in a story, but also because we're almost at the end of the run. The next episode is the last episode. The curtain is coming down for the last time, and soon. After three years of build up, and struggle, I want to end with a bang, not a whimper.

Now there were a lot of reasons it wasn't as good as it could have been, and I take full responsibility for some of it, and as GM, for not reigning in the issues that were caused by the players, and not by me personally. I'm the Captain of the ship, and I should have seen the hazards, and steered us clear before they became a problem.

But I didn't. Why? Because sometimes you don't. You don't see it in time. You see it, but can't figure out what to do about it. You figure, they'll get it any minute now. Give' em time.

Before I continue with this, let me tell you about a very different game I ran about three weeks ago... 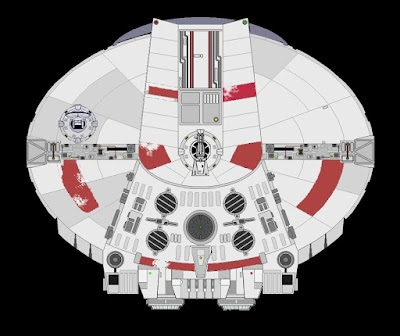 The PCs' unnamed, customized Nova Drive Z-3 Light Freighter.
I did this image after the game. No picture was used during play.
Through the players' ideas, and in-character dialogue, the ship
obtained numerous details, and an easy to imagine layout.

I had the pleasure of running a one-shot of my favorite system, and one of my favorite subjects, Star Wars D6 by West End Games. Truth be told, I didn't really use the system so much as the Star Wars setting, and lessons learned from years of reading the West End Games books, and running the game. Mechanically, I simplified things a lot.

There were three players: My friend Dan, who is a few years my senior, and two recent acquaintances of his, a guy and a gal, who were both in their mid-to-late twenties. I had never met the others two prior to that day.

I have to say, it was one of the best single sessions I've had in a long time. It reminded me of my old NJ group days. Everything just clicked. The players quickly created, and connected with, their characters. Their individual goals were simple, clear, connected to the setting, and not specific as to how they could accomplish them. They established their relationships with each other through the course of play, but in very short order.

No one was the 'star', no one was trying to be, and as a result, each one shined.

It was nirvana. I think I heard angels. Seriously, angels. I've heard the deep space pilots talk about them...

Probably the most notable thing about the adventure was that it moved fast. Incredibly fast.

In the past, I always prided myself on my pacing. Fast, and exciting during battles, or chase scenes; measured, and tense while attempting to infiltrate a location, or hide from overwhelming opposition, etc.

For the past year, or so though, this has been very off.

Reluctant to push the players in a particular direction, and take agency away from them, I all too often let them endlessly discuss, debate, and overthink their situations (this is true in both of my current groups).

Unfortunately, they don't know how to police themselves (or so it seems). Many of them forego what would be the most interesting, exciting, or cinematic option, instead looking to the most logical option; often making certain it is the surest, safest plan, devoid of conflict, drama, tension, and sadly, emotional impact, and resonance.

I realize my particular style of play is not for everyone. It is often best suited for a pro-active player who gets really immersed in the setting, and who works with the group (as well as with the flow of the game) to come out smiling on the other end.

I guess it's asking a lot, although I've never thought of it as such.

In conclusion, they can't all be winners. Not every game will go exactly the way you want it to. And, surprise, you want it to go well. No great insight there, eh?

Now, how much of the responsibility for the game's success is the GM's, and how much of it is the players'? Equal? That would seem logical. Yet...there is but one GM, doing a lot of work, putting in a lot of love, and usually two, or more players. Surely, if you were helping a friend move a piano, you wouldn't have one friend hold fifty percent of the weight while three others support that other half.

If there is a place where a fair dialog needs to take place, it's probably here, in that special place reserved for friends who help friends move pianos.