For this next installment of Campaigns I Have Known, we're going to go to Warp 9, slingshot around the Sun, and travel all the way back to 1983.

This my dear friends is one of my earliest campaigns for one of my favorite games. Based on a suggestion/recommendation by my good buddy WQRobb, here is a campaign classic...﻿


The campaign came about as the result of an impromptu RPG session thrown together because we had a few free periods at school. It was likely the result of some special assembly, or a teacher's union meeting, or some such. Anyway, for whatever reason, my friends and I had the time, we had the freedom, and we decided to get a game together.

This was a fairly common occurrence. Throwing a Star Trek game together I mean. It was our go-to game at the time. We would roll up officers, pick a ship, and head off into the Final Frontier on some crazy, ad-libbed adventure that would pop into my head.

We must've made a dozen crews, named a dozen different Starfleet vessels, and visited a dozen planets that were never seen again.

Mini-rant...Honestly, I can't understand people who play the same character every time they play a game. That, or they reuse old characters again, and again. Sure, we all have favorites. I've reused characters a number of times myself. I do it in Superhero games more than any other genre, and always after years of not using the character. C'mon people, stretch that ol' imagination. Don't be lazy....Mini-rant over.

So in this one instance, just like many before it, the players generated some Star Trek characters, and I prepared for our mission. There were a few things that made this particular outing special as I recall.

I had gotten a hold of a fanzine somewhere, and low and behold, there was an original [fan created] ship in there that I really liked. It was labelled a Research/Survey vessel and fit the bill of the kind of ship we were thinking about. I showed it to the group, and it was unanimously voted so strange looking that we just had to use it.

I'll be honest, I don't remember the first session beyond that. I can't for the life of me recall the scenario. I remember we had fun though. We all liked the characters, the vessel, and the speculative science, mystery-solving, 'big idea' nature of the adventure. It was Star Trek as heavily influenced by Space: 1999, and OMNI Magazine.

It was a hit. More so than I had realized.

When the opportunity to run a quick adventure came up again a few weeks later, the group asked if I still had the characters sheets, and stats for the USS Polaris, our vessel. I did. For some reason I not only didn't throw them away, or lose them (as I did so many other one-shot game materials at the time), but I actually left them in a folder in my backpack (or book bag as we used to say).

We ended up playing them again. And again. Before long, we all looked at each other, smiled, nodded, and agreed - this was our new campaign. We couldn't have planned one better ourselves.

Campaigns I Have Known
Proudly Presents... 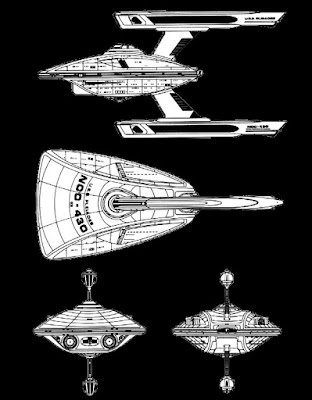 The vessel first appeared in an article in
the Star Trek fanzine, 'Warp Factor One'
written by Don Corson - Publication Date 1976

Circa: 1983. There were approximately three dozen sessions in this campaign. Early on there was no set schedule, then by the mid-way point it was short 4-5 hour sessions once, or twice a week, and one 8-10 hour Saturday session a month.

Player Base: Our core group consisted of five male players, all about 14 years of age. Other players would pop in and out playing 'guest star'* roles on a fairly regular basis. While no one guest star appeared more then five, or six times, I do recall that one of the last sessions had about 8-9 players. It is possible that ship's Chief Medical Officer may have shown up more than 6 times, but I'm not positive.

Characters: As noted above, this was a pick up game initially. We had some time to kill, decided to play a Star Trek game, and threw some characters together. Oddly, one guy had been itching to play an Andorian, one always played an Andorian, and then another was like, "Hey, why don't we all play Andorians!" It didn't end up exactly that way, but it was a largely Andorian crew, which was awesome for me since they're my favorite Star Trek species.

Sadly, this is where my memory betrays me. I don't recall any of the PCs' names. I'm so ashamed.

I recall who played what type of character, species, rank, and what their position was aboard the ship. Just no names. It was 33 years ago. Cut me some slack.

Our commanding officer was a career Starfleet Officer from a long line of Starfleet, and Andorian Imperial Guard personnel. He hailed from Andor (aka Andoria, Andor Prime, or Epsilon Indi VIII), but largely grew up on flights between his homeworld, and Earth. As such, he is especially good at dealing with other species, particularly Humans.

The Polaris was his first command, but he had spent years on a Miranda Class (called an Anton Class in the old FASA game) that had performed exploration missions near the Klingon border. The commander was not a fan of the Klingons.

(I sadly can't recall who played this character, which is very strange. A true, and slightly scary sign that I'm getting old. Also, that this was a long time ago. How can I not remember who played the First Officer? I remember the character, just not the player. So odd.).

A more disciplined, by-the-book fellow than his Commanding Officer, the First Officer was an excellent military man, having engaged in a number of conflicts while serving on his previous post (a Scout/Destroyer if I recall). His best skills are Starship Weaponry, Shields, and Ship-To-Ship Tactics.

The First Officer grew up on an Andorian colony some distance from Earth, and was unfamiliar with other species prior to attending Starfleet Academy.

Through perseverance, skill, and confidence, the Science Officer turns things around, gaining the friendship, and admiration of his peers, and subordinates alike. He has a possible [off screen] romance with the Asst. Chief Helm Officer (a PC guest star).

The other non-Andorian member on the command crew was the ship's Chief Engineer, a Megarite. Megarites are an humanoid, aquatic mammalian species, similar to Terran Whales. They communicate through bellows of varying tones, volumes, and frequencies. While they normally  breathe air, they do have gill-like membranes that can extract oxygen from water for a limited time. His skin was similar to the hide of a Terran rhinoceros.

The Chief Engineer was warm, gregarious, and saw the crew as extended family. 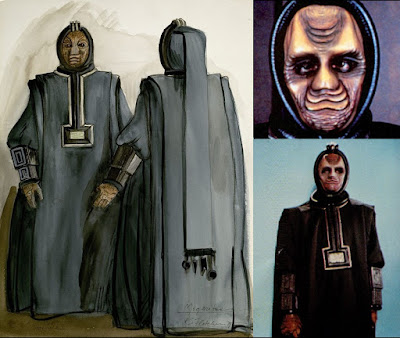 Our toughest customer in personal combat was no doubt our Chief of Security. Well versed in the use of his fists, feet, swords, phasers, and demolitions, this guy meant serious business.

Hailing from a failed colony world, and having something of a checkered past, this guy was given a chance by the Polaris' Commanding Officer, and the two are fast friends.

A Female, Andorian, Helmsman - Lt. Junior Grade -  who covered for the First Officer when he was on landing parties. She was identified as the Assistant Chief Helmsman. 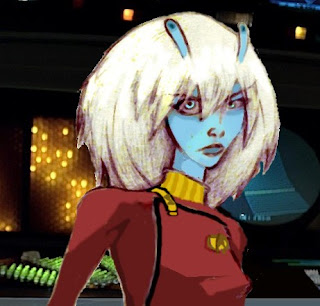 Illustration by Adam Cotnam.
Coloring By Adam Dickstein (that's me!)

An Andorian, Male, Shuttlecraft Pilot who also sometimes doubled as a Navigator on the bridge.

Andorian, Male, Doctor - Chief Medical Officer of the USS Polaris. He was a Guest Star, but joined us for a good number of sessions (probably 6, but maybe more). He was often used as an NPC while the player was not around (one of the first times I did that).

While the bridge/command crew only had two non-Andorians, there were a few others onboard. Roughly 5% of the total crew compliment of around 175 crewmembers were not Andorian.

Some other guest stars were:

A Male, Vulcan, Geologist who desperately wanted to be reassigned because of how cold the ship was (we decided Andorian 'room temperature' is considerably lower than Human standards).

A Female, Caitian, Bio-chemist. Also something of a nurse/field medic.

Synopsis: There was no real overarching metaplot in this campaign. Instead, I used a very sandbox approach, letting the Commander and crew choose which planets they wanted to study in an area of space not too far from the Organian Treaty Zone, and therefore the Klingon Empire.

Klingons were the main antagonists (one of my rare campaigns that used them much), but other reoccurring opponents included Orion Pirates, the Gorn, and an original species of weird, 'War of the Worlds Martian' type squid things.

Most of the sessions focused on some heady science fiction concept, not unlike the original Star Trek series, but in some ways more like Space: 1999, or Red Dwarf. That is, it was less about the moral, and social issues of the time, and more about exploring scientific theories, and 'What If?'s.

Additionally, a major inspiration for the campaigns' individual adventures came from articles in OMNI Magazine. Various classic Science Fiction novels and short stories, such as those by Robert Heinlein, Larry Niven, Alfred Bester, and others, were also a source of scenario ideas.

We really have a great layout for the interior of the USS Polaris. It had an unusual bridge design created by my friend Joe, and myself. We mapped out a good portion of the ship, including the Sickbay, Shuttle Bay, Engine Room, Mess Hall, and major laboratories.

The ship started with a standard Shuttlecraft (presumably two), but later we modified it into an original design the was more like a mini-scout ship.

I was reading a lot of scientific books, and magazines at the type, and this also influenced the type of adventures we had.

The campaign never had a definitive ending. I don't recall what happened to make us change games, but it was probably no more weighty an event than we found a new game we really want to try.

*I'm wondering if I should do a post in the near future on 'Guest Stars', a gaming tool I've been using for years that enables people to drop in, and out of campaigns easily.

Any interest in that? Does anyone else have that as part of their games?

Oh wait! Happy Leap Day! Hurray for the end of the month of February >_<