It's no secret that I love The Orville. 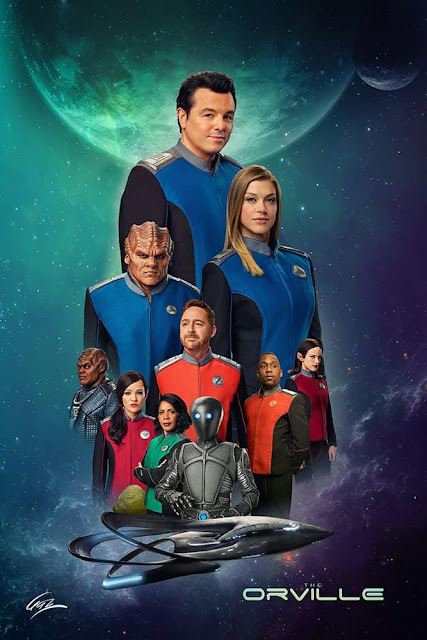 Now that the second season of the show is complete, I am even more excited and motivated to run an Orville RPG campaign. Before I discuss the specifics of that idea, I like to take a look at the why of it and how Season 2 really cemented my interest.

Now some might say, "Here he goes again, taking someone else's creation and making a post about using it as a game setting instead of creating his own."

To those people I say, "It's OK with me if you are not interested. There are other blogs you can check out that may be more to your liking. You are always welcome to come back any time."

After all, I totally understand that some people would rather read about adventures in a mind-blowing-ly original umpteenth pseudo-Europe with orcs, elves, and Conan-copies. Who wouldn't want to discuss initiative again? (And again, and again, and again...Zzzz) 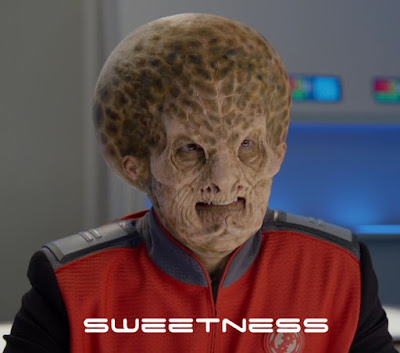 Season 2 of The Orville was a very different animal from Season 1, though not so different as to be unrecognizable. It was clearly a continuation of the characters, setting, ideas, and style the show-runners developed from the beginning of the series but with the 'dials' adjusted to improve the overall product.

The second season turned the Science Fiction and Action/Adventures elements way up and the Comedy way down resulting in a balance that gave the show it's own unique identity and feel. More than a homage to Star Trek (and never a parody as some mistakenly assumed), The Orville Season 2 told episodic stories that nonetheless tied into several over-arching narratives introduced in the first season.

Now let's engage the Quantum Drive!
It's time to wash your mouth out with Gordon!

The show's characters are perhaps it's strongest asset. Unlike another starship focused Space Exploration Sci-Fi show that shall go unnamed, this one actually spends time getting to know the ship's Captain and crew and letting us grow to like them. We even get to know the ancillary characters outside of the main crew, be they civilians, villains, or whathaveyou.

As the show progresses we understand each individual better and better and like or dislike them more. Yes, I said dislike. Not every character on the Orville is going to be your favorite character and some are actually going to piss you off sometimes. That said, by making you angry, the character in question still achieves the goal of making you want to see more of them. Will they go too far? Will they change their ways before it's too late?

Each character is different, flawed, and relatable because like us, they aren't perfect.

As a guy who loves World Building, I thoroughly applaud Season 2's efforts in that regard. Using what was introduced in Season 1 as a base, Season 2 expands upon practically every aspect of the Orville universe.

The aggressive, antagonistic, religious zealot species, the Krill, are revealed to have enemies beyond just the Planetary Union. In a twist, a rudimentary treaty between the Union and Krill is established to deal with the even greater threat of the highly advanced, artificially intelligent Kaylon! Who are they? Well, one of their species, Isaac, has been serving aboard the Orville since the first episode. Whaa? That's not all! A further fleshing out of the Moclan culture reveals just how messed up it is and leads to them potentially seceding from the Union rather than recognizing and granting freedom to a portion of their populace.

That's only the species we've already established. We're introduced to new species, how first contact works, how the Union deals with peace talks and times of war. New aliens enter the setting all the time, usually portrayed or at least voice but a notable guest star.

Oh my gosh - I need them to confirm Season 3 so I can start preparing for an Orville campaign. Sorry. One track mind sometimes.

What impressed me most of all in The Orville's second season was how they kept making new episodes that reconnected with old ones from Season 1; they told new stories but simultaneously furthered long standing arcs.

For example, the episode 'Primal Urges' deals with Moclan Second Officer Bortus experiencing a case of addiction to porn. It is revealed he developed the addiction after the Season 1 episode 'About A Girl'. When his mate Klyden wanted their newly born daughter changed into a male (as all Moclans are male except for rare 'defect' births) Bortus was angry and disappointed in Klyden and didn't want to be intimate with him (though clearly still felt the urge to be intimate). A later Season 2 episode, and one of my favorites, 'Sanctuary' stands completely separate from the previous episodes dealing with the issues between Klyden and Bortus and yet ties into them very strongly if not very directly.

Basically there are some four or five episodes between the two seasons that deal with the Moclans and while each is it's own story, each is also part of the 'Moclan Plot Thread' as it were.

This is awesome and reminds me very much of how I establish a narrative in my RPG adventures. There are different sessions with different encounters and goings on but many of these events tie into one or more greater 'meta-plots' developing in the background.


All this just scratches the surface of how amazing this second season was. In addition to the more well developed characters, universe, and stories we got to see new alien Union Officers, incredible starship battles, fantastic VFX, great music, and so many guest appearances it blew my mind. F. Murray Abraham, Jason Alexander, Ted Danson, Marina Sirtis, Patrick Warburton, and Bruce Willis! Are you kidding me?! So cool.

My desire to run an Orville game is stronger than ever, further aided by the announcement that WizKids is doing a set of The Orville HeroClix. What? You heard me. They are due out in September of this year.

The only dark cloud as of this writing is that the series has not been officially picked up for a Season 3. There are many factors that may contribute this, most notably the Disney Fox Merger and the upcoming end of Seth MacFarlane's contract and the negotiations that go with that.

Still and all, things look good. Clues, hints, and many a rumor point toward the series getting renewed. I have high hopes but like millions of other fans of the show, all I can do is wait.

I look forward to sharing good new with you all in the future.

UPDATE: First announced by an article on Entertainment Weekly's website and later confirmed by several sources including Deadline Hollywood, The Hollywood Reporter, and Variety, The Orville has been renewed for a 3rd Season!

Congratulations to the creator, cast, and crew of The Orville and a deep, heartfelt thanks to the fans who kept the faith and spread the word. I look forward to seeing what comes next.


*The post title comes from the 6th Episode of Season 2, another absolute favorite of mine.