What is my favorite game system? Never was there a tougher question with an easier answer.

Before I give my answer though, I want to point out a few key elements of the Barking Alien mindset when it comes to game systems and mechanics:


Very few systems hit all these parameters, and fewer still hit that sweet spot between ease, flexibility and crunch that I am forever seeking. Think of one that does all these things and you've go RPG Nirvana on your hands my friend. 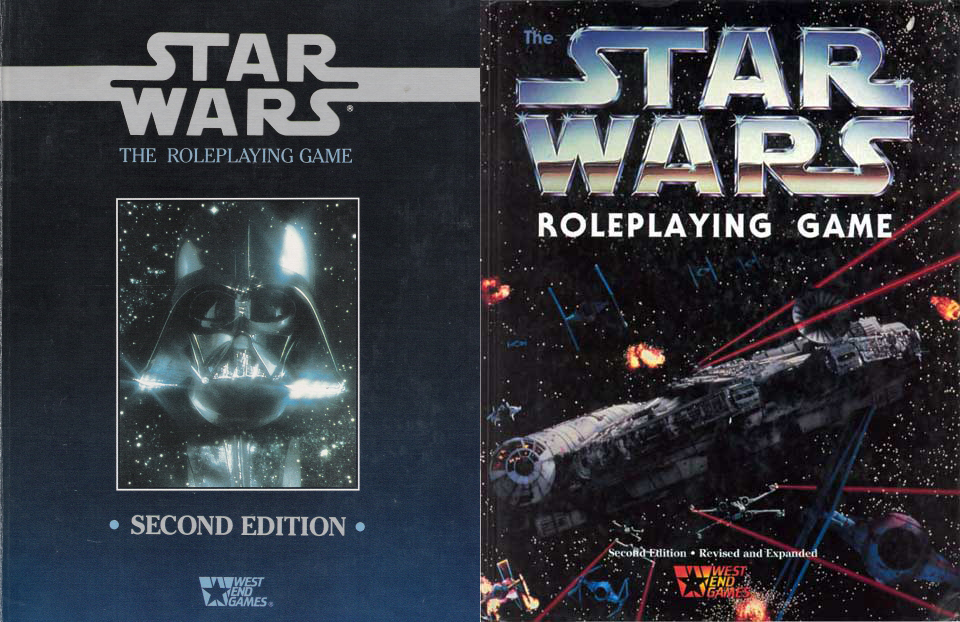 Star Wars - Second Edition
West End Game D6 System
Yes, I know what you're thinking, "But Adam, I thought you were a Star Trek fan, not a Star Wars fan! What gives?"
The truth of the matter is, yes, I do like Star Trek over Star Wars, but that has never stopped me from liking Star Wars (only George Lucas, and those damn awful prequels could do that).
Additionally, I give credit where credit is due in game design, and this is brilliant design. As much as I love the Star Trek RPGs (And I do so love Last Unicorn Games' ICON System, as well as the FASA version), there is something almost sublimely perfect about Star Wars D6. In my opinion, it is exactly right for Star Wars as it is depicted in the first three films.
It's a simple system, without very much hard crunch, but it still provides enough detail as to not feel all loosey-goosey mechanically. The game is very fast paced, using simple addition and practically no charts to determine the outcome of skill and combat rolls. Star Wars D6 is one of the games that meets my personal criteria of a good game in that once you've made up your character, you never have to look at the rulebook during play to play the game. Everything you need is either on the character sheet, or it's easy to memorize.
Although I am somewhat out of practice, I could probably run the game without referencing the rulebook at all. It was not unusual in the mid 90's for me to throw a Star Wars game together without having the books present. I memorized the six attributes, Dexterity, Strength, Knowledge, Perception, Technical and Mechanical, knew how many dice were allocated to each (18 dice), and how the dice could be broken up (a single dice can be broken into a +1 and a +2, or three +1s). You choose skills, roughly 25 or 30 (five per attribute), and then received seven (7) bonus dice to increase your skills.
Holy Yoda. I do still remember it.
In conclusion, Best. Game. Ever. At least in that the premise and the mechanics are perfect for each other, and the mechanics are fast, fluid and they work.
Other favorite systems include the very similar Star Trek ICONs System by Last Unicorn Games, Ghostbusters by West End Games (the Proto-D6 System), InSpectres (which is a modern update of Ghostbusters), Sketch!, Risus, Teenagers from Outer Space, Mekton (especially Mekton II. I felt Mekton Zeta got too complicated), classic Traveller and Champions 4th Edition.
A note on Champions: Champions is a perfect example of an imperfect universal system. While awesome for Superheroes, it's point-buy nature and lack of a really good economic system make for a game system I wouldn't use in a setting where money really mattered.
But that's just me.
May The Games Be With You,
AD
Barking Alien
Posted by Adam Dickstein at 7:06 AM