This one is easy to answer.

Remember, I haven't spent very much time as a player over the last 37 years. The number of PCs I've had, and campaigns that I have been in, probably number less than two dozen. I certainly can not accurately remember more than that many.

In the entire stretch that I've been in the hobby, I'm only played a smattering of horror games and none were truly scary. Most didn't even achieve my personal goal as a GM of the genre, weird-you-out-creepy.

Two that did were my friend William's short, but awesome, Call of Cthulhu campaign, and my buddy Keith's equally brief, but really good, alternate setting Deadlands game.

No, the only game to ever put real fear in me was William's Champions campaign, 'The Age of Champions'.

In the 'chapter' I was part of, 'The Age of Chaos', we fought villains that you honestly thought might freakin' win if you didn't do something about them. Characters died, and most of the time, they didn't come back. Not all supervillains killed, but some did, or would, if it meant their success, or escape, depending on their motivations.

Since I loved my characters so much, I really did not want them to die. At the same time, all three of my PCs - Starguard, S.I.M.O.N., and The New Yorker - shared a desire to protect the innocent at any cost, and a certain amount of poorly thought out bravado. 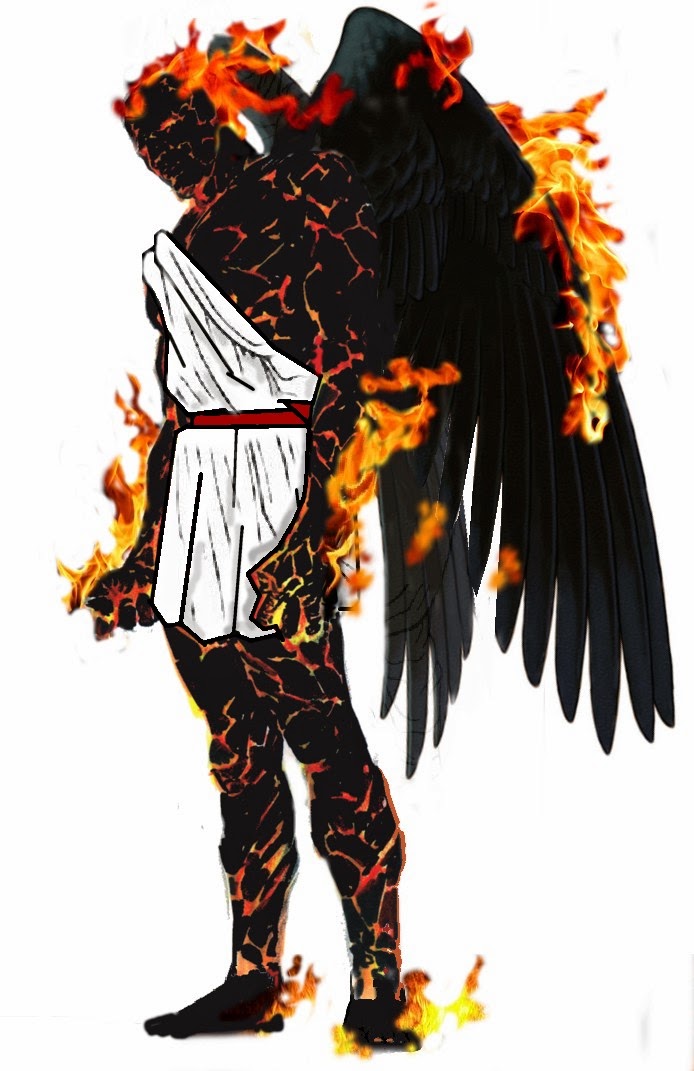 Penciled, inked, and colored in Photoshop by Me.
Heavily based on an illustration by Alex Ross.

The Dark Trinity Incident
In a veritable flood of brilliant and challenging story arcs, William managed to make this one stand out above and beyond. It wouldn't be the only such stand out mind you, but damn this one was so epic that to this day I can't believe we (the PCs) survived. OK, mostly survived. We lost one or two of our alternate characters.

Each player had a character in the campaign we considered to be our main character. This was our A-List PC if you will. Then, in addition, some of us had alternate, or alt, characters. Most of these were considered B or even C-List.

Now, this was purely an option. You didn't have to have spare characters, but sometimes it proved to be a lot of fun to switch from your cosmic, spacefaring Superman (such as Starguard) to a more low-powered, or even non-powered, street level crime fighter (such as my alt, The New Yorker) for a few sessions.

In most cases, you played your main more than your alt (or alts). In a few rare cases, a player would switch characters often, or play one for a long stretch and then play the other for a long stretch, resulting in two mains (such as my friend David's characters, Omni and Night Force).

For the most part, you wouldn't find yourself playing both characters in a single session, and if you did, it wasn't at the same time. Starguard and New Yorker never teamed up (technically, I'm not sure they've even met).

Every once in a while though, there would be a story arc, a series of scenarios so devastating, so world-shattering, that every last costumed crusader on the planet would be called upon to thwart the oncoming apocalypse.

This was one such time.

It's The End of Days for Three Parallel Worlds - Crisis on Three Earths!

Three years prior to the start of this adventure (that's three years of real time by the way), a group of PC superheroes had managed to trap the entity known as Dark Seraph in the null plane of Limbo. In those three years, deprived of the vast majority of his powers, Dark Seraph explored his prison of endless nothingness, eventually coming upon two 'points' in Limbo that seemed different from the rest of the essentially featureless realm.

Apparently, the Limbo into which he was placed touched upon two other Limbos, separate but essentially similar to his own. Through the use of what abilities he had remaining, Dark Seraph reached out to these other Limbos and made contact with two other entities who were similarly trapped.

The first was a dark, cosmic god-being known as Dark Seed.

The second was a female spirit, formally Human, but twisted and corrupted by the black magics of a presence known as Dark Unicorn.

Dark Seraph concocted a plan to escape all three of their confinements by forcing what little power they had on each others prisons instead of their own. Eventually, the walls between the Limbos shattered and all three beings, each more mad, more powerful, and more determined than they had ever been before, were free to let loose chaos and death on their unsuspecting universes.

Only...they weren't quite as unsuspecting as the Dark Trinity believed.

On Champions Earth Wilco Charlie-1, Professor Christopher Crighton, aka The Legionnaire, was alerted to some kind of severe quantum flux, and was able to pinpoint a hole in the fabric of space-time.

On Champion League Earth Delta Ceti-1, Brother Destiny, a missionary in possession of an ancient amulet which in turn possessed him, detected a disturbance in the spirit world, and traveled through the astral plane to investigate. He soon found Limbo had been broken open, and a once well occupied space on The Great Genesis Gate now lay empty.

On Challengers Earth Mu-1, Professor Christopher Crighton, aka Professor Phenomenal of the Phenomenal Four, received shocking news from his computers monitoring The Never Zone. The negatively-charged, psychokinetic energy mass known as 'The Dark Unicorn' has somehow broken free from it's confinement in 'The Place That Is Not'!

Dark Seraph then has a plan to merge the three Earths together, however only a single population would survive. That is to say, if there are 7 billion people on each world, when the merger is over there will be 7 billion people, not 21 billion. All those who don't get to be the one that forms on the merged Earth will perish. That's right, it's not that there are three John Smiths and they merge, it's that one of the John Smiths will survive and the other two will be obliterated.

Those destroyed will become a Death Flotsam, a psycho-spiritual energy foam of sadness and despair, that will be absorbed into a device of Dark Seed's design. The machine will then convert the deceased into power that can further energize the Dark Trinity members, and grant them more power than they've ever had before.

Of course, Dark Seraph is plotting to absorb all the Death Flotsam himself and double cross the others. Dark Seed is aware of the possible double cross of Dark Seraph, and is working on a contingency plan that will destroy all of existence. Dark Unicorn is torn between a vampire like hunger for the power, and desperately trying to reconnect with her humanity.

In the end, it took all the heroes, and many of the villains, of the three Earths to combine their forces, resources, skills and abilities in an attempt to save their worlds. When the smoke cleared, PCs and NPCs were dead, some heroes and villains from each Earth were permanently trapped in a world not their own! The villains were defeated, but only barely, as we managed to convince Dark Unicorn that she was really Jane Ash (once a normal girl, loved and missed by friends, family and a world in need), and that without her help all would perish. She turned on the other two who had largely ignored her and used her while scheming against each other.

I, as S.I.M.O.N., my mid-range, B+ List PC, punched her in the face. Yeah, not one of my prouder moments but I had to do it in order to disrupt the Unicorn Power and allow Jane's consciousness to regain control.

Starguard fought Dark Seed. A highlight of his career I can assure you.

The New Yorker was transported to the Marvel-like Earth, and saw a rogues gallery of costumed nutjobs beating up some nerdy kid in a spider-themed suit. Yeah, well, they now wish they hadn't. "Da medical bills for dose guys ah gonna be murda."

I'll never forget those last moments of the finale, when the dimensional merger was reversed, and that crazy machine invented by the two scientist Crightons was sucking Dark Seed's machine into itself. Dark Seraph  was being pulled into the collapsing singularity, a custom designed, pocket dimension of 'Before-Space'. Dark Seraph tried to take Omni, Favorite Son, and Maxi-Mode with him. Refusing to let anything happen to Omni, Starguard flew to the rescue, suddenly finding himself backed up by the heroes Arctic Fox, the Golden Ankh, Professor Arcane, and the villains Kineto, Lord Gauss, and Black Staff. 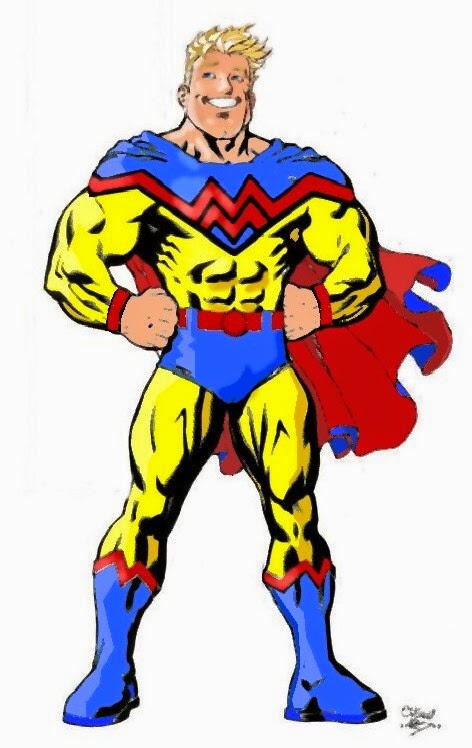 Epic upon epic. What a battle. What incredible GMing. I didn't think we were going to make it, and I was getting ready to kamikaze Starguard into Dark Seraph to hurl them both into the Before-Space vortex that had formed. At the last second, Night Force and Brother Destiny figured out a way to empower the vortex to an even greater level. Caught by surprise, Dark Seraph was sucked in and trapped forever.

Damn that was some scary sh**.


*Drawing of Maxi-Mode based on a Superman drawing by Ed McGuiness and Ian Churchill's Marine Man.