This past Saturday, the 25th of June, a friend of mine...no...two friends of mine got married.

To each other that is. 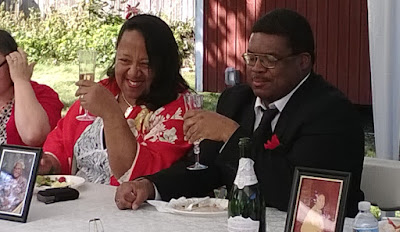 I've known the bride for almost 25 years. I've seen her through two boyfriends, passing relatives, a girlfriend, or two of mine, my engagement, marriage, and divorce, and all manner of good times, and some less so.

She is a warm, funny, creative person, an amazing artist, and one of the best RPG players I've ever had the pleasure of GMing for. She was a member of the oft-mentioned, and much vaunted 'New Jersey Group' that I ran some of my best games with over the years.

It made me so happy to see her so happy. Her head was together, her sassy attitude in full gear, and her demeanor that of genuine bliss.

The groom, and I have know of each other for close to 20 years. We were never friends per se, but rather distant acquaintances.

I always remember him as a friend of my friends, yet always on the periphery. He never seemed close to those I was closest to in this particular group. Like a moon in an extraordinarily wide orbit.

I was very pleased to have had the chance to talk to him, get to know him, help him with some of the logistics of the day, and impart the tiniest bit of advice from my own experiences. Clearly I am no expert on marriage, but I like to think I let him know he had a friend in his corner whom he didn't know he had. If anything, I hope that took a little of the edge off his nerves.

It was a beautiful ceremony performed by another friend of theirs (and mine), and yeah, it was pretty awesome. 
On a unrelated, related note...


Among the guests I encountered at the wedding were people I hadn't seen for the better part of a decade, or more. A few I have communicated with via Facebook, or email once in a blue moon, but for the most part it took a close look, followed by a literal double take in one instance for them to recognize me, and vice-versa.

Before the wedding, and at the party after, we caught up and waxed nostalgic about old times. As gamers are want to do, we reminisced about games of yore.

My pal Phil mentioned our old Star Wars game, and how it was the best game he'd been in. I thanked him. He told me about a new Star Wars RPG campaign one of the guys had started, and honestly it sounded pretty damn cool.

A little while later I got to talk to the fellow running it, and we shared notes.

Some time passed, the subject of the new Star Wars game came up again, and someone mentioned how I had run this amazing campaign that they all still talk about. I turned to see it was a fellow named Robert who...it's very hard to explain the gravitas this fellow has. He is a true scholar. A brilliant, wise, thoughtful man. His health has suffered somewhat in recent years, but he still looks surprisingly youthful. When he speaks, everyone falls silent. He has the gift of great knowledge, but the know how to avoid being long winded. Astounding guy.

Anyway, I felt a bit embarrassed as he wasn't even in my old Star Wars: Ever The Brave campaign. As I started to thank him, but try to diffuse some of the praise, he went on to say that having seen it, and those who played in it, he had "never seen a game so evocative of its source material, that engrossed its players to the same degree. It was truly a work of art."

Again, Robert wasn't in the game. He had observed it many times, and knew many of the players in it quite well. As you can imagine, high praise from a fellow I respect a lot had me wanting to run a victory lap, and hide under a table in equal measure.

Finally, no more than a ten minutes before I had to leave I was in a conversation with the guy I mentioned who was running the new Star Wars game. He says to me, "You know what? We've been talking shop on and off all day, and I don't think I actually got your name"

"OH! YOU'RE ADAM! THE ADAM! You're the guy they're always talking about. You ran that Star Wars game they keep mentioning! You ran other stuff too. They're always saying you're the best."

Heheh. I've never been so happy to travel home by train. I don't think my ego would've fit in a car by the end of that day.

I miss my NJ Group. They are really, good people, and great gamers.

Hopefully, we can reconnect, and not wait so long between visits.


Congratulations to Lynn and Matt,

I wish you Wisdom, Harmony, Peace, and Love 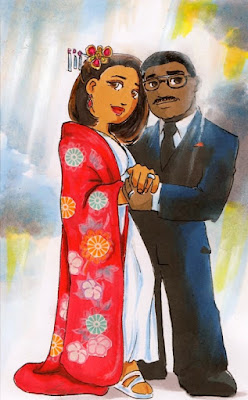 Lynn and Matt
Art by Matt, Colors by Lynn