Everyone familiar with classic Traveller will know this refrain: 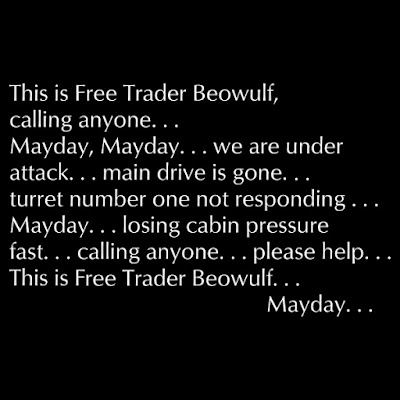 Oh no! The ill-fated Beowulf is done for!
Wouldn't it be awesome if this were followed up by: 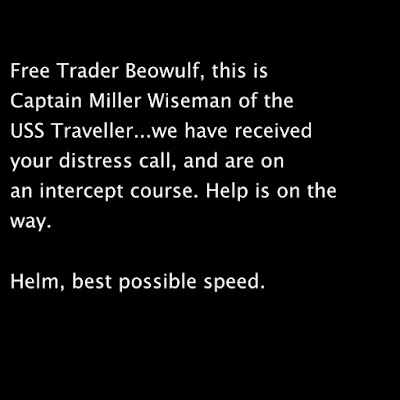 It that...Starfleet? Thank goodness!
We're saved!
I've been putting some additional thought into this project, and more so than others I've worked on, I think it sounds great, but even I am a tad skeptical as to how it will be executed.
Don't get me wrong, it's a cool idea, and I am up to the task, but when all is said and done, I have to ask myself, 'Does this work better than what I already have?'

This is a common question we in the RPG hobby ask ourselves, or at least it should be IMHO.

Does the newest edition of a game give my players, and I a superior gaming experience to what we already have, or have had? Often the answer is easy. Sometimes not so much.

In the case of many games, I prefer older editions. I still run Champions 4th Edition (though they're up to 6, or 6.1 with Champions Complete), Ars Magica 4th, Star Wars WEG D6 2nd Edition, and my preferred Mekton is actually Mekton II (trying desperately to get a copy of the first edition).

For Traveller, I tend towards classic, original Traveller with some additional material from MegaTraveller.

For Star Trek, the tendency (by a wide margin) is to go with Last Unicorn Games' ICON System. When I feel like doing something different, I go for the older FASA game.

Do I need another Star Trek RPG? That question came up as I discovered the upcoming Star Trek Adventures RPG by Modiphius Games. I am very excited to see that game, and happy to be part of the playtest, but I think I am more interested in the new material it will present (adventure ideas, ships, aliens, NPCs, etc.) than I am about a new set of rules.

That brings me back to Star Trek Traveller.

Can I not run the above scenario in a previous version of a Star Trek RPG? No, I can. There is nothing in the USS Traveller's attempt to rescue the Free Trader Beowulf that can't be done with FASA, LUG, Far Trek, Where No Man Has Gone Before, or any number of other RPGs.

So why Star Trek Traveller?

I'm not entirely sure. I feel part of my desire to put this together stems from my love of both things (Star Trek and Traveller), and part of it comes from my wanting to run Star Trek this year for a group of people who don't have quite as strong an attachment to Star Trek as I do. They do have a strong attachment to Traveller though, and that is 'my in' you might say.

I love the idea of a diverse, heroic, good natured, and well meaning (though not perfect) group of people banded together to explore, learn, create, grow, and defend their principles against the forces of tyranny, hatred, fear, and ignorance.

I want to live in that future. I want to investigate it. I want it to challenge me.

I want to pass that love onto others.