CHAMPIONS - THE AGE OF CHAOS - Prologue

I return you now to the year 1986 and my friend William C.'s 'AGE of CHAMPIONS' Champions RPG campaign, now in its sixth and a half year.

A year and a half into the second chapter, 'The Bronze Age', things have taken a most unusual, epic, and challenging turn...
The Story Thus Far...
A new player had joined the fray as the heroic, technological genius Christian Scaramangler, heir to the Scaramangler Foundation and Scaramangler Industries. With his father having been accidentally killed by aliens, Chrisitan Scaramangler has embraced the world-wide distrust of extraterrestrials. And then some.

While simultaneously standing side-by-side with the heroes of UNTIL's Project: UNITY, Scaramangler (and his player) secretly used his money, influence, technology, and most of all his devious brilliance to waylay the team's leader, Omni.

Omni is an alien you see and one of the most beloved heroes in the USA, if not the world. Scaramangler's player spent a good deal of time and effort trying to embaress, frame, beat-up*, and otherwise hinder Omni at every turn.

The key element is that while all the players involved were aware of what was going on, the characters in the story were largely unaware of Scaramangler's participation in the plots to sabotage Omni (as well as any other aliens - good or evil). Scaramangler's player, my friend Eric, was incredibly good at covering his character's tracks.

The end result was an amazing multi-layered story, featuring deep characterization and complex plots within plots. As the game was primarily run in the lunchroom of our high school, many people watched and listened to the narrative and eventually wanted in on the action. A number of new heroes and villains appeared at this time.

While the game appeared to be going great, there was real concern behind the scenes on the part of Will (the GM) and Dave (Omni's player). How long could they all keep this up? Would character animosity bleed over into player animosity? How would Omni and the other heroes balance the scales as more new players came in wanting to play villains?

Most of all, how could they find a way to counter the Machiavellian cunning of Eric/Scaramangler? What they needed was a special kind of hero PC - a good guy as good at being good as Scaramangler was at being bad.
That's where I came in...

One day, with no particular fanfare before hand, the group assembled to play their next session and I sauntered over to say hello to Dave and some of the other players. I then sat off to the side and waited for an appropriate moment to make my character's entrance.

The scenario that day involved Scaramangler Industries unveiling the new Mark IV (I think) Minute Men robots - good guy versions of the Sentinels from Marvel Comics that helped protect the Scaramangler Foundation. Some were to be shipped to PRIMUS, some to UNTIL, and a few were going overseas to Britain's MI-13 and Japan's Superhuman Self-Defense Force. 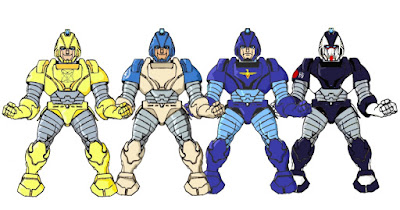 In the livery of:

(Left to right) the Scaramangler Foundation, UNTIL, PRIMUS,
and The Japanese Superhuman Self Defense Force

As the robots were loaded on to ships and into warehouses by PRIMUS, UNTIL, and Scaramangler Industries personnel, all under the watchful eye of several member of Project: UNITY (the heroic PCs), I got up, walked over to the table, and stood with my arms folded next to where my friend Dave sat. The GM, Will, described an object, no a caped humanoid, descending slowly to hover some 30 feet in the air over the loading dock.

Heroes, military, and police prepared for a fight but Omni stayed them all with a subtle shaking of his head and a calmly raised hand. He was told by the GM that Omni was familiar with this being's species, an alien race known as the Pleiadesians.

The alien identified himself as StarGuard, leader of The Protectors of Pleiades, guardians of the Pleiades Imperium.

"What is it that you want here on Earth 'Imperial'?", Omni asked.

StarGuard informs Omni and those gathered, that he knows Omni is actually the heir to the throne of the planet Mandaar. The Pleisadesians and Mandaarians have been rivals for centuries. Now they are locked in a Cold War that could result in a devastating conflict between the Imperium and the Mandaarian Empire (though I think they called themselves a Republic). StarGuard insisted that Omni return to Mandaar to retake the throne from the fascist government currently in charge.

Omni simply refused, saying he was more a citizen of Earth than a ruler of Mandaar. He refused to abandon the place he called home and the people he'd sworn to protect.

Finding honor in his words, StarGuard would not force Omni to break his vow to Earth but nor could he let the only chance of peace between their two peoples be harmed. StarGuard vowed to remain on Earth to protect Omni, until such time as Omni agreed to return to Mandaar.

Scaramangler was not pleased. (Heheh) A new alien superhero had literally dropped into their midst and one with experience and power. Furthermore, he was being played by me, an 'X-Factor' to a group in which not everyone knew me well.

And so began...The Age of Chaos!