On to Part III of my Campaigns I Have Known series covering a campaign I ran in the late 1980s / early 1990s of Paradise Fleet, a Japanese Science Fiction/Space Opera Comedy RPG.

As noted in my previous entries, my posting of this series was initiated by my friend Lord Blacksteel who asked if I had ever combined my love of Star Trek with my love of Japanese Giant Robot Anime. The answer is yes, though not directly.

What you won't find here is mecha launching from the shuttlebays of Constitution Class starships. What you will find is an Anime/Manga style tale of action, intrigue, romance, and space exploration in the distant future.

The Corporation Alliance is Cyberpunk-themed government ruled by cybernetic CEOs and bionic bureaucrats. It is the most scientifically and technological advanced of the three galactic nations, focused on commerce, and trade with numerous smaller governments and colonies scattered throughout our spiral arm.

The Holy Noble Nation is the largest government in terms of volume, and the second most advanced. Based on a system of rule similar to medieval feudalism, the people of the HNN believe they are destined to rule all of space by 'Divine Right', and for the rest of the galaxy's benefit and best interest. They worship the 'Holy Spirit of the Cosmos'. Many members of the imperial bloodline possess supernatural powers.

The Golden Flourishing Wild Empire, or Jinhua Kinku Empire, is made up of genetically engineered half-Human, half-animal beings first created by the Great Galactic Empire over a millennia ago. Used as soldiers, workers, entertainers...essentially slaves...by the GGE for a thousand years, the Kinkujin (Wild People) are none too trusting of the other Human led governments. They're generally concerned with their own people, and the balance between developing an advanced society, and maintaining ecological well-being on their worlds. 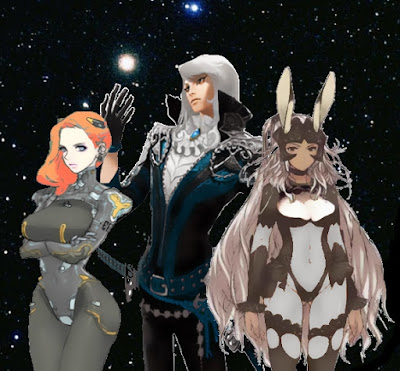 Representatives of the Combined Operations Space Fleet
(Left to Right)


After half a century of cold war conditions between the three powers, things escalated from a hot war to interstellar armageddon in short order. As the citizens of the galaxy prepared for the end, representatives of the three cosmic nations met in secret in hopes of finding a peaceful solution.

A the zero hour a cease fire was declared. A peace treaty was hammered out, and the people of all three space nations saved!

As part of the treaty, the Combined Operations Space Fleet was formed. Consisting of personnel, and vessels for the trinity of governments, the COSF would explore the frontiers of space and share the knowledge, and resources they discovered with all countries equally.

Those in power touted it as a grand experiment, and a great opportunity. The citizenry were filled with hope. The officers, technicians, and other personnel assigned to it thought it was a crazy pipe dream, and within weeks they began sarcastically calling it, 'The Paradise Fleet'. Tensions on board the various ships were high, especially on the few that actually had mixed crews.

Within weeks of the COSF's much celebrated launch, the Paradise Fleet came across a spatial anomaly it could not identify in an extremely wide orbit around the star Altair (Alpha Aquilae). The object appeared to be a star, pulsing rhythmically, and roughly the size of Earth's moon. As scout vessels, and mecha approached for a closer inspection, the star-like object flared with incredible brightness, releasing an energy wave that blinded the entire fleet's sensors. Systems went haywire. Navigational equipment failed. Chaos reigned.

Hours later the entire fleet, all 21 starships, and support craft, found themselves on the opposite side of the Milky Way galaxy. At best speed in optimal conditions, it would take approximately 50 years to get back home.

Paradise Fleet's Upper Echelon Command decided to focus all efforts on doing just that, getting home, with the secondary goal of maintaining their original mission - Explore the galaxy, together as a single unit, or die trying.