I have a million things to get to, but it's been a week from hell and I am just putting down the first thing that popped into my head. Future plans are for a Mekton/Mecha RPG post, some ruminations about The Legend of Zelda: Breath of the Wild, and of course, more Pokemon AD.

Wow. Whose table-top RPG blog reads like this? Seriously. I am pretty proud to have written that sentence. OK, enough of that. Back to near crippling self doubt...

For now however, I wanted to talk about something that occurred to me while reading a recent post by none other than the ever intriguing Noisms. While his train of thought and mine do not always line up, I am always willing to jump on that train of his and take it a few stops just to see where it goes.

This time is goes into an idea about forests, and fire-fighting Elves, and such, but that's not the part that really caught my attention. The part that got me was that he uses, as a point of reference, a post by Zak Smith within Zak details what Noism calls the Superman Sandbox Problem.

Very much worth a read, as are most all of Zak's posts. The crux of the matter I want to discuss is that Zak states that in a sandbox style game, the heroic characters are at something of a creative disadvantage.

Hmmm. Perhaps disadvantage isn't the right way to put it. The idea is that a roguish character is more proactive, while a heroic character is more reactive. Therefore, the rogue sets up his, or her particular encounters, whereas the hero simply chooses one option, or another, or blindly bumps into an option that GM has chosen.

If a group of players with roguish PCs decide to - let's use one of Zak's own examples - steal a car from the used car lot, use it to aid in the getaway from a bank robbbery, ditch the car by a church afterwards.

Zak says in his post that if the PCs try to enact this scheme during a game, they basically create that session's adventure. The 'Adventure writes itself' he notes.

The idea is that this doesn't happen for Superman, because...because...wait. Why doesn't it work this way for Superman?

In the same post, Zak gives various possible examples of how a heroic character, Superman in this case, could possibly interact with the sandbox world he's in: As we did for the roguish PCs, let's pick one possible option. For today's session, Superman wants to, umm, ah-ha! He could try to free Mon-El from the Phantom Zone (in the privacy of his own home, I suppose). [In the Fortress of Solitude - ed.]

"While any of these things may result in a conflict (and thus an adventure), the Superman PC--unlike the rouguish PC--has no idea of what the shape of that conflict will be."

How does the rogue in the previous example know, in advance, what kind of security the bank has? How does he know the condition of the car he, and his gang have stolen? What if Clark Kent just happens to be in the bank depositing his latest check from the Daily Planet at the time of the robbery? What if the Flash is in town and hears about the car being stolen from the used car lot? What if the used car has a crappy transmission, or something else is faulty that causes the car to stall?

Likewise, how does Superman not know he will probably have to face off against villains he, and his father, trapped in the Phantom Zone when goes to free Mon-El? Doesn't going to free Mon-El go virtually hand-in-hand with saying, "I feel like getting into a tussle with Quex-Ul, Zaora, and General Zod today"?

"Superman does not choose to sketch out a violent conflict. The rogue does. Superman chooses from a set of options whose consequences (conflict-wise) are mostly unknown." Zak writes.

I guess...but no more, or less so than the rogues. It's a matter of perspective, and approach. To further illustrate what I mean, let's look at Zak's scenario for Superman in a Metropolis sandbox, and compare/contrast it to similar ones I've used (with some pointers taught to me by my Champions Guru friend Will Corpening)...

"Ok, so picture this:

A GM somewhere writes out the city of Metropolis and the city of Gotham and the rest of the world of DC Comics in excruciating detail. The train lines, the shopfronts, which hot dog store owners are secretly shark-men, every inch of it. It's all ready to go.

Now here comes a PC playing Superman, into this sandbox.

"So what do you want to do today, Supes?"

"Umm, nope, not much, Metropolis is a fully-functioning independent world going about its business."

Right here at the end is where my view point differs. If Superman's player says he goes on patrol over the city, he doesn't find nothing to do. That's not only boring, but it takes away part of the player being proactive.

If the GM begins by asking the player what he wants to do, and then the player tells her, then the GM should, ya'know, do that. Have that happen. Having that result in nothing makes no sense.

What the player is saying here, if they're a proactive player, is that they want to have Superman find street crime in Metropolis. Maybe they're tired of Brainiac, and Bizarro and just want to stop some bank robbers in a stolen car. 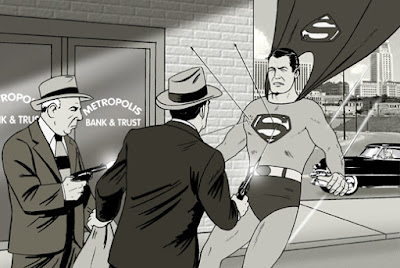 If the rogues went to steal a car to rob a bank, would you tell them there weren't any cars in the lot? That none of the cars had gas? That the city had no banks? Of course not. The adventure writes itself, right? So why would a superhero deciding to patrol for crime find none?

My buddy Will would often open a Champions session by asking me where my character Starguard was, and what he was doing. Here are just a few of the actual answers I gave:

He's in space deflecting a comet from hitting the Earth.

He's near Jupiter, rescuing an alien starship caught in the planet's gravity well.

He's assisting another hero, trying to save the passengers and crew of a damaged 747.

If you were the GM, what would you take from this? Will noted that I like to play up Starguard's 'space hero' nature, and that flight is important to me.

Do you think he just said, "OK, you deflect the comet/rescue the ship/save the plane. Now what?"

NO! How boring is that? Also, I as the player am indeed setting up for conflict in a proactive way. Why not take me up on it? If a bunch of thugs can turn a stolen car, and a bank robbery into an adventure, why can't I do that with a comet, and a bunch of aliens that need rescuing?

In the case of the comet, Will took the opportunity to tie my action into another player's opening game answer. My pal AJ said that his speedster, Pulse, was at New York City's South Street Seaport dealing with his arch-nemesis, the cold war, cold weather cretin General Winter. Apparently GW was using a device to attract the icy, space-born object towards the Earth for villainous purposes. 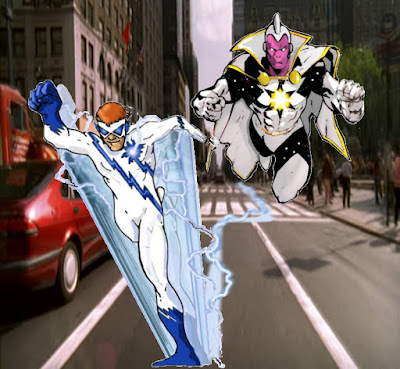 Pulse and Starguard
On the tail of a comet, as the trail goes cold!


In the instance of the 747, it was my attempt to not only do something classic for a flying hero (always wanted to save a plane Superman style), but also a chance to meet another hero from our world setting who maybe I didn't know. As it turned out, the flight was from New York to Atlanta, Georgia and I got to meet a few of the heroes of the South Eastern United States, including Sure Thing (a favorite NPC of mine), Swift, and the high flying, evangelical Messenger.

It's a Sure Thing baby.

I always see gaming as a friendly tug-of-war, a push, and pull between two forces, the players and the GM. I throw challenges at them to make them think, and act to overcome obstacles, but they - especially proactive players - challenge me to come up with things in response to their ideas.

I don't really plan adventures with proactive players in the mix. I layout the sandbox, plant story ideas, and options in the setting (hence my term 'Storybox' for my preferred style of play), and then see what the players have their PCs do.

They may feel like waiting for me to give them something.

"We scan the area. Any anomalous readings?"

"We check the Trouble Alert Monitor. Any crimes going on?"

They may want to pursue something mentioned in the background of the setting.

"If there's nothing pressing, we'd like to check out that planet you mentioned two or three session back. The one with the unusual rings. We never got to really look at it, and it sounds interesting."

"Is Black Monday still at large? It always bugged me that he escaped. I want to investigate where he may have gone."

They may want to do something unexpected of their own design.

"The other players and I were talking and I think we have a way to upgrade the shjp's Star Drive using a new scientific theory I read about. We're going to dock at a space station, and do some upgrades. Let's dock somewhere where we can get high tech parts, and maybe find some work should the cost of the upgrades get expensive."

"The team and I talked about it, and we're tired of having such poor relations with the Atlanteans. We're going to go on a peace mission to Atlantis, talk to their leader, and hammer out a treaty. Maybe we can help them find, and capture that villain Wavemistress while we're in their region. That would really help getting them to see us favorably."

In the end, I agree that the proactive hero is less common than the proactive ne'er-do-well. However, I think that it may be that it's so because we've been trained (and trained ourselves) to think that.

It is also a trope of certain genres that the heroes lives are calm, and peaceful until such time as trouble strikes. Makes sense from both an emulation, and simulation stand point

That said, it's your game. There is no reason it has to be that way if you can fit the idea of a proactive benevolent character into the scheme of things without throwing the whole setting out of wack. My assertion is that generally speaking you can. Maybe not all the time, maybe not in every situation, but if the GM makes time for the proactive heroic PC, and the player uses that time in a sensible and entertaining way, well...why not?