After a bit of a hiatus we're back with a continuation of my Campaigns I Have Known recap series entitled Paradise Fleet - The Long Way Home.

I highly recommend checking out the previous Paradise Fleet entries in order to get the full story. Essentially, Paradise Fleet is a Science Fiction/Space Opera Comedy focused on a fleet of starships, and crews formed by a special treaty between three separate, normally competing/antagonistic interstellar governments.

The 1st Combined Operations Space Fleet (nicknamed 'Paradise Fleet') of my campaign had been hurled across the galaxy following contact with a mysterious spatial anomaly. Forced to work together in order to survive, the men, and women of the fleet fought against their own personal prejudices, and/or the bias of their companions in order to ensure the safety of the entire armada.

The Main Story campaign featured a team of Mecha Pilots, and supporting characters doing just that, protecting the Paradise Fleet from threats within, and without, while exploring space in search of resources, allies, and a faster way home.

Then there was the Side Story...

The Gaiden, or Side Story, is a common feature in the word of Japanese Manga, Anime, and video games. It features an anecdotal, or supplementary tale that runs roughly simultaneously with the events of the main story. In modern times this is often used to create a spin-off, with ancillary information that enhances the world building of the setting in addition to adding new characters, technology/magic, and happenings.

That was the idea behind this campaign-within-a-campaign. A number of my friends who heard about the Main Story wanted in, but the number of players, their schedules, and such made it infeasible to add them in. Instead, we ran a separate game occurring at the same time, with the same setting, and a connected plot.

Our Side Story begins sometime around the third, or fourth session of the Main Story. A High Nobel Nation Destroyer/Escort leaves the fleet, intent on blazing its own path in an effort to get home. A Corporation Alliance Escort Corvette (Slightly smaller and faster than the Escort/Destroyer, but carry less offensive power) gives chase. As the CA Corvette, and its squadron of (PC) Mecha Pilots draws nearer to the renegade vessel, the squad is informed that the Destroyer is carrying an experimental super-weapon. It can not be allowed to escape.

Things escalated very quickly. The HNN ship's Commanding Officer claimed the entire transportation of the Combined Operations Space Fleet across the galaxy was a set up. According to him, it was perpetrated by an alien entity, and that the Fleet's Upper Echelon Command knew it would happen. Rather, the Upper Echelon's of each interstellar nation's government knew it would happen. It was all planned...

To what end? Why go through all that trouble? It didn't make sense.

As the Corvette's squadron tussled with the HNN Destroyer, and its Mecha Pilots - in both physical and philosophical combat, a Corporation Alliance Light Cruiser scouting far ahead of the rest of the Fleet was alerted to the situation. Placed on stand-by in case the Corvette needed back up, the Corvette's Mecha Pilots were spurred on - none of them wanted to have to call for help from the Scouts.

Meanwhile, there was a clear sense that the Mecha Pilots of the Corvette were considering what the Destroyer's commander had said. Was there a conspiracy here? Was the Combined Operations Space Fleet's predicament someone, or something's, conscious decision instead of an accident?

Eventually the Destroyer, and its Mecha were defeated, and captured. Unfortunately, the ship's commander escaped in a smaller craft, along with the super-weapon. The first session ended with the PC group in hot pursuit. 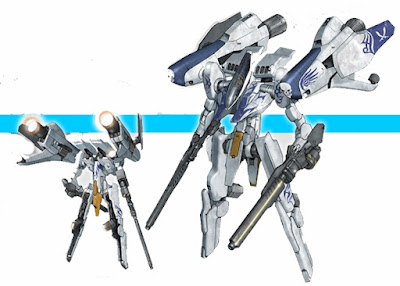 Over time, various incidents turned the allegiance of the PC squadron from dedicated protectors of the Combined Operations Space Fleet to pursuers of the truth. Labelled Renegades by the COSF, the team strove to prove what had really happened to the Fleet, and why. They didn't have animosity towards the fleet, but rather a powerful desire to know what was really going on.

The campaign progressed with a hearty mix of action and intrigue [unlike the discovery/exploration theme of the Main Story]. The Renegades were sometimes seen as heroes, sometimes villains, which in all honesty confused the heck out of the the COSF's powers-that-be. Likewise, in crossovers with the Main Story characters, the two group were never sure whose side each was on.

At least twice the two teams joined forces - once to defeat the HNN Destroyer Commander, and eliminate his stolen super-weapon - another time to stop a group of alien Michians who were worshiping a negative energy being, the dark counterpart of the true architect of things - the spatial anomaly with good intentions who set the entire epic in motion.

Unlike the heroic efforts of the Main Story PCs, who in the finale of the their campaign fought to protect the Positive Entity from the Negative Entity, and its minions, the Renegades fought a small group within the COSF Upper Echelon Command who had plans to steal the power of the entities for their own purposes.


Next...The Battle of Outer-Sight...Main Story Heroes versus Side Story Renegades.

Posted by Adam Dickstein at 1:57 PM