Space Is The Place

It seems like the idea of a television show featuring a starship exploring outer space and battling evil is a fairly popular concept. Why, just last week there were two trailers for two different programs with this very same idea.

The first trailer was for the FOX Television Science Fiction Comedy-Drama The Orville. I liked that a lot. It really had that classic Star Trek feel, and a look that merged Star Trek: The Next Generation, and Galaxy Quest. I think The Orville has a lot of potential.

Now the second trailer is for a new series that should be familiar to many of you...

Star Trek: Discovery is the newest television series - the sixth - in the long standing Science Fiction franchise that has been my favorite example of Silver Age Space Opera since I was a wee lad. Anyone who knows me, or who visits this blog knows how much I adore Star Trek. That said...

Star Trek: Discovery looks good. I mean, its production values are top notch, and it has some really good actors attached to it. The camera work is more 'movie cinematic' than is typical of modern television, and lens flares aside it has great lighting. Very atmospheric. 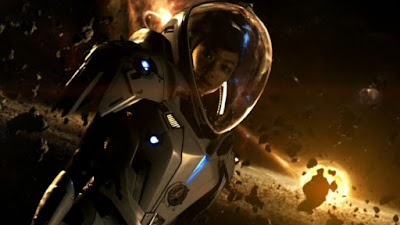 Sadly, if the best things I can say about an upcoming Star Trek project are that is has good camera angles and decent lighting, that's kind of unfortunate. Star Trek: Discovery didn't grab me. It didn't excite, or interest me overly much.

The setting is supposed to be 10 years prior to Kirk, Spock, and the Constitution Class Enterprise, but it definitely doesn't look it. The starship exteriors, interiors, and pretty much everything looked too advanced. Isn't Captain Pike out there somewhere, with Spock as his Science Officer and 'Number One' as his First Officer? Isn't the Enterprise the state-of-the-art vessel of the time period? What the heck? 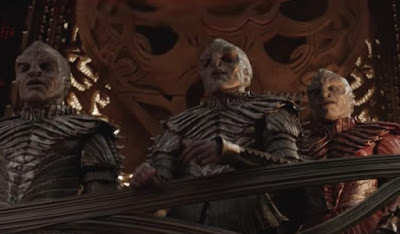 Also, are those Klingons? They are? What the heck? Why change their appearance yet again, and have it look so...not like Klingons. What is the purpose? Does CBS not understand that Star Trek is something beloved, and familiar to a lot of people?

The main issue however is that it didn't look special outside of the cinematic way it was presented. The uniforms*, the aliens, everything just looked generic. It could be any Sci-Fi universe if it wasn't for the title, and the arrowhead emblems (which shouldn't be there at this point in Star Trek's fictional history).

"Now hold on Adam", you might be saying, "Orville looks that way too."

True, but I would remind you Orville is a parody. Orville is trying to emulate Star Trek. At the same time it looks more like Star Trek than ST:D does (what an unfortunate abbreviation). Also, the more I look at The Orville the more I see the originality and attention to detail in it. For example, note that the uniforms feature four different division colors, and their insignia badges have different designs.

I am griping a bit, but understand it's only because I love Star Trek so much. I think it deserves to look and feel better than a parody of itself. While I am happy, and thankful that we are getting more Star Trek on TV, we the fans have to pay for the show. If you want to be able to watch the first season of Discovery, you'll have to get CBS's All Access network. That doesn't feel right. It seems almost 'Anti-Federation'. 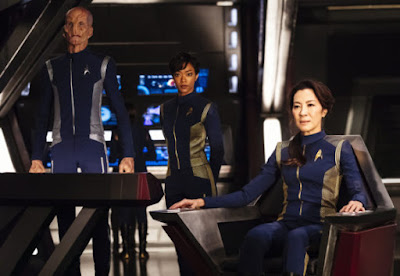 In conclusion, my fingers are crossed that it will be good, but I am not holding my breath. I hope to be pleasantly surprised. Star Trek: Discovery's trailer doesn't have me hyped to run a Star Trek game though. The Orville's trailer on the other hand does, parody, or not.


*The uniforms...I really don't like them. I am not sure why, but I am not into them at all.

Posted by Adam Dickstein at 2:14 PM