To begin with, I went with a bunch of my friends to see Guardians of the Galaxy, Vol. 2 on Friday night. It was welcome both for the camaraderie, and the fact that the majority of my day consisted of walking in a torrential downpour. A warm, dry theater full of Marvel Cinematic Universe geeks was just what the doctor ordered. 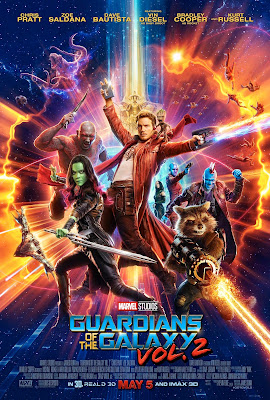 I loved the movie. Loved it. As much as the first. It was a bit more talky, and perhaps the character arc elements were handled in a somewhat heavy-handed way, but these minor flaws were expertly balanced by loads of action, humor, cool special effects, and more Easter Eggs than a church social on the third Sunday in April.

While I have traditionally been more of a DC fan than a Marvel one as far as comics go, Guardians of the Galaxy is one of the Marvel properties I was really into as a kid. I mean, a team of outer space superheroes battling alien oppression in the distant future - what's not to like?

The more modern incarnation of the Guardians, which resembles the movie team a lot more, has also been pretty good overall, and so when the Marvel Cinematic Universe decides to mix both new and old together for a film, well, they're playing my song.

In addition to seeing the movie, I got together with some friends I don't get to game with all that often to run a one-shot of Star Frontiers.

I modified one of the classic TSR modules, Mission to Alcazzar, and ran the three players through it with a focus on fast paced, zany combat and snappy dialogue. Seeing Guardians of the Galaxy 2 obviously influenced my approach.

Well that's all for now, back very soon with some additional musings on Space Opera Science Fiction role playing.

Posted by Adam Dickstein at 4:42 PM