As a treat for those of you out there you have supported, and/or purchased my new RPG, or who are at least curious about what the art looks like in...


...I thought I'd post some of my favorite illustrations from the book.

Many of the photographs are pictures of my own puppet creations, much of which are long gone I'm afraid. Thankfully pictures of them in varying stages of completion remained on one of my hard drives.

In some cases I combined my illustrations, and photos with stock, and royalty free images, especially of animals. Royalty free clip art was also used on occasion.

Anyway, here you are, a little bonus material from Barking Alien Productions to you! If you haven't given this book a looksee, maybe the art will inspire you to do so. 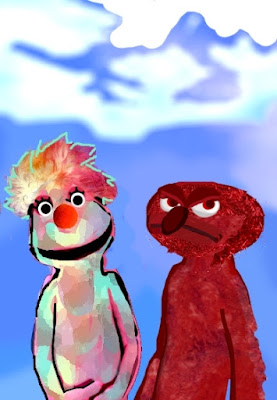 Peppy Monster and Yammer the Grump 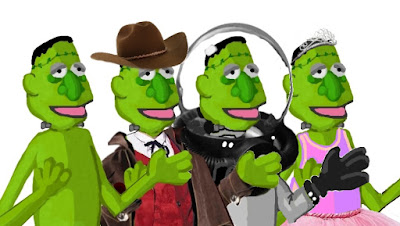 The Many Costumes of
Frankenstein's Monster 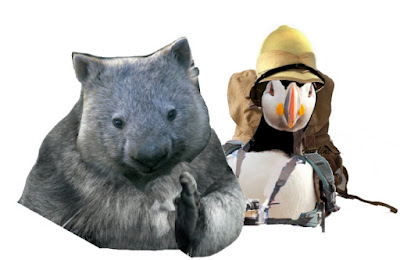 Ludwig, The Avant Garde Wombat
and his faithful assistant. 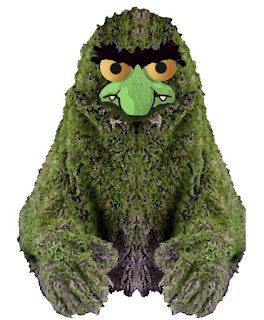 Those are just a few of the illustrations in the book, and really they're some of my favorites.

You know what? I'm feeling generous. I'll also include a color version of the character sheet that comes with the game, because that's the kind of guy I am. 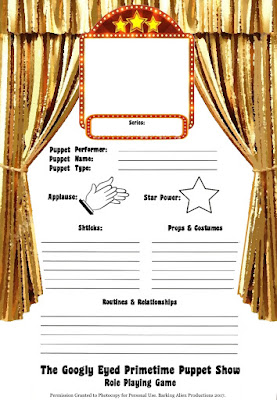 As you can see, the character is very similar to my original sheet done for this product's precursor. It's been streamlined a bit, and I definitely like how it came out.

Well, that's all for now.

Much still to come,