Apparently my post on 5E touched a nerve. That or it failed to. No comments.

With that silly 5E business out of the way, let's talk about a game that matters. I am of course referring to Star Trek. 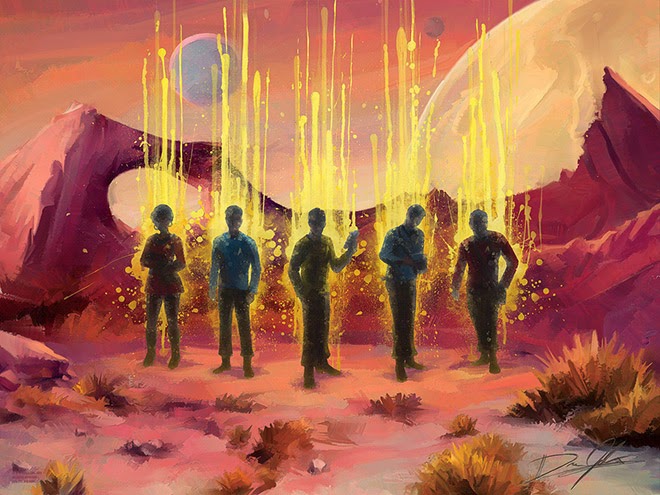 I mentioned recently that I will have the opportunity to run Star Trek in the near future for a group I currently play with as a player. We meet roughly ever two weeks, or so, to partake in my friend Dan's homebrew Superheroes RPG. We took a break from Supers last time we met to play a group of military officers fighting the supernatural in World War II Belgium. It was really a good session, and I am looking forward to the continuation of it.

That said, we are getting together this Friday night to play another Superhero session, this time focused on the Justice League Unlimited. My good friend, and reoccurring member of my regular group, Dave!, will hopefully be joining us for our JLU adventure. He's thinking of playing Vixen. I'm leaning towards Red Tornado, or maybe Blue Devil.

I am going to go TOS for this for sure. It's that kind of crowd. Especially Dan. Not only is he in my age range, but he likes that sixties sensibility; Dan noted that the Original Series implies that while all the different races and cultures of Humanity finally united, and further teamed up with alien allies, the viewpoint of the Federation is one of a distinctly United States bent.

The default belief system is that whether your a blue-skinned, white haired guy with antenna, or a silvery-green haired, space babe in a silver bikini, you have the 'inalienable' rights of life, liberty and the pursuit of happiness.

Furthermore, if some cave computer, or alien cloud entity, is denying you and your people one of those rights, our brave, intrepid Starfleet officers are going to go in there and kick its butt until you're free.

I am going to try to keep the adventure relatively simple and tight, although I would like to throw in a philosophical quandary to keep it in the right tone and atmosphere of the series. I am very likely to set the PC crew up with a non-canon ship design, something slightly smaller than a Constitution Class, but we'll. Dan and a few of the others have a definite love for the old girl.

That's it for now. Musing about for the time being.

If there are any ideas, questions, or other comments, please feel free to drop by and speak your mind. The more the merrier.

Posted by Adam Dickstein at 8:19 AM