It feels appropriate that on the heels of The Book of Boba Fett that the next entry in the 31 Days/31 Characters Challenge for 2022 be a Star Wars character. Not just any Star Wars RPG character but one of my all time favorites by one of my all time favorite people, my dear friend Lynn Morton.
I have known Lynn for over 30 years. Originally I knew her as the girlfriend of a friend of a friend but eventually we got to know each other and become close ourselves. We've seen break-ups, birthdays, weddings, and the loss of friends and family over the decades. Although time goes by where we don't chat nearly enough, we always find a way to stay connected.
A member of what I often call 'The New Jersey Group', Lynn has been an integral part of some of my best TRPG campaigns. She's been mentioned [directly or indirectly] many times on this blog. She played Ziva Yesperani in the Ghostbusters, NJ, Lt. Shilana Kincaid in Star Trek: Thunder Bay, and Dr. Ana Myr Clearwater in ALIEN FRONTIER (the best introduction of a PC after the beginning of a campaign I've ever had).
So it is that I absolutely had to do a post featuring Lynn's first character from the first campaign I ran with her in it. 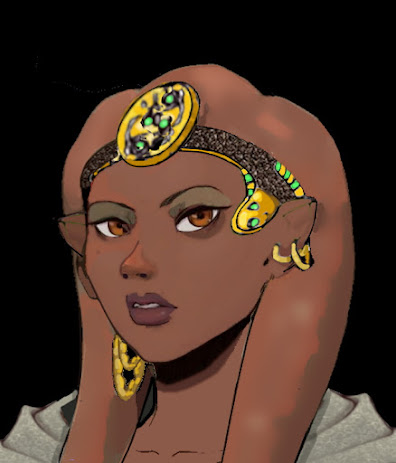