I want to run a Superheroes RPG campaign.

I really do. I don't think you understand how much. More than that.

No, you don't get it. I really, really want to run one, sooo bad. I mean, I just used a 'so' with three 'o's in it. Who does that? That's some high school crap. Well I'm willing to do it. That's how desperate I am to run Supers. 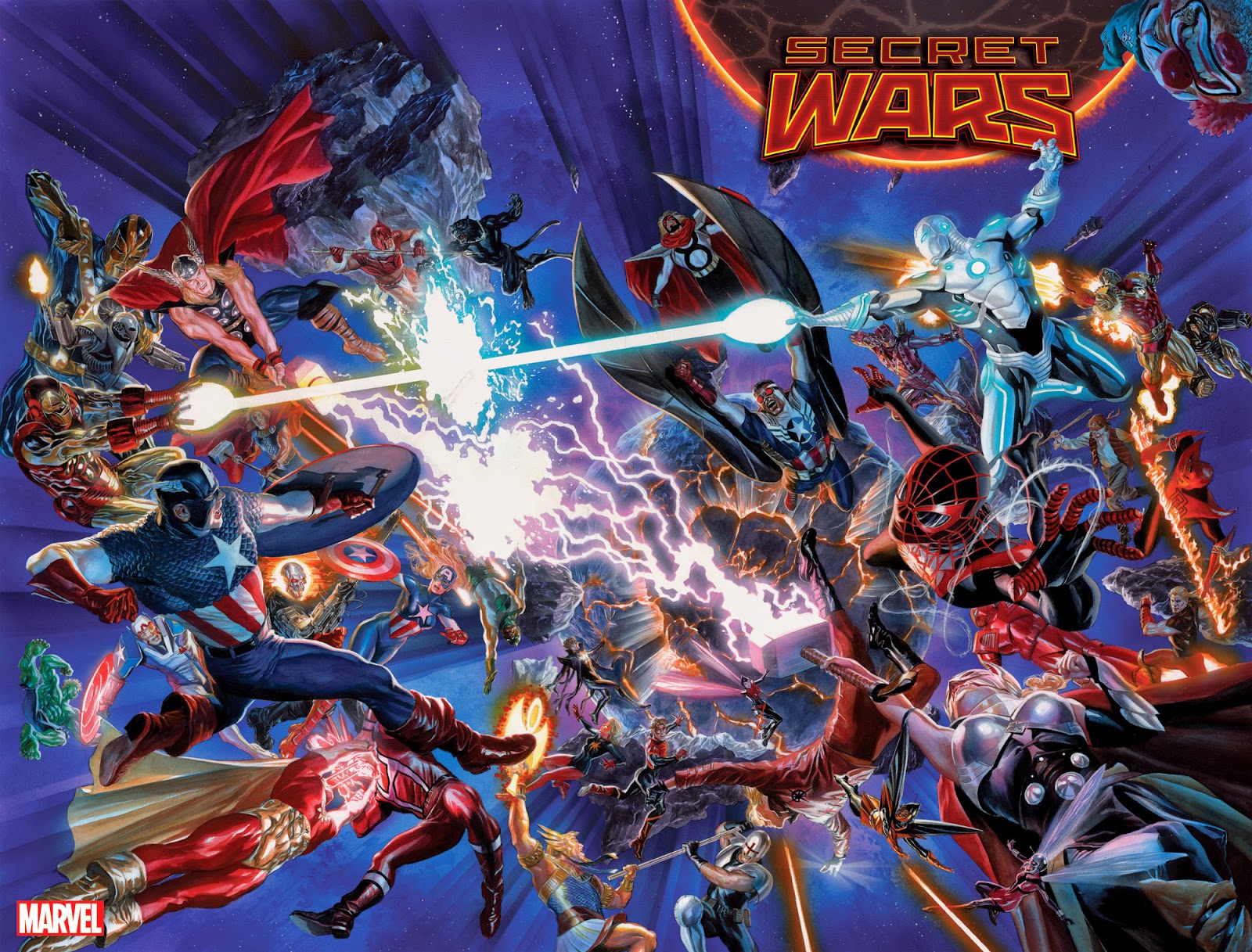 
The problem I have, as evidenced in many of my previous, recent attempts to do so, is that I don't have a lot of consistent players who are comic book readers, and/or fans of the Superhero genre. Fewer still who are fans of my type of Superhero comics, the 'Four Color Comics' of the Silver Age and Bronze Age.

See, I am fighting a 'secret war' of sorts. The objective is to get a group of people on the same page that I am on in regards to comic book Superheroes so that I can run a campaign of it.

That page is a beautiful, action-packed, double-page splash. If only I could get them to see it, I'm sure they'd be amazed. This is far easier said than done, as the two or three people I am thinking about probably don't even know what a 'double-page splash' is.

*Thuds head against the wall. Repeatedly.*

Even though, intellectually, I am well aware that there members of fandom who may never have grown up with Superheroes and comic books, it is still sometimes hard to me to wrap my head around the idea. To me, Superhero comics are an American institution, right alongside hot dogs, apple pie, and horribly expensive health care.

Hmmm. Bad example. OK, how about this...

The U.S.A. is only 238 years old. Our history as a nation pales in comparison to that of England, France, Japan, China, and numerous other countries on the Earth. In addition, while it's awesome that we are a people of mixed cultural heritage, we don't have the unified mythology and folklore of our respective homelands from which we originated. Sadly, the average American citizen has little knowledge of the spiritual tales of the original Natives either.

So what is our folklore? Who are our mythic heroes and villains?

Well, you definitely have characters from the fiction made popular entertainment in this country such as Dracula, Frankenstein's Monster, and the like. You have the tales of Tarzan, the Lone Ranger, and perhaps Conan. Prior to these characters and other heroes of the Pulp Era, you had Paul Bunyan, Johnny Appleseed, and the real life cowboys turned larger-than-life like Billy the Kid, and 'Wild Bill' Hickok.

Beyond that, you have Superheroes. 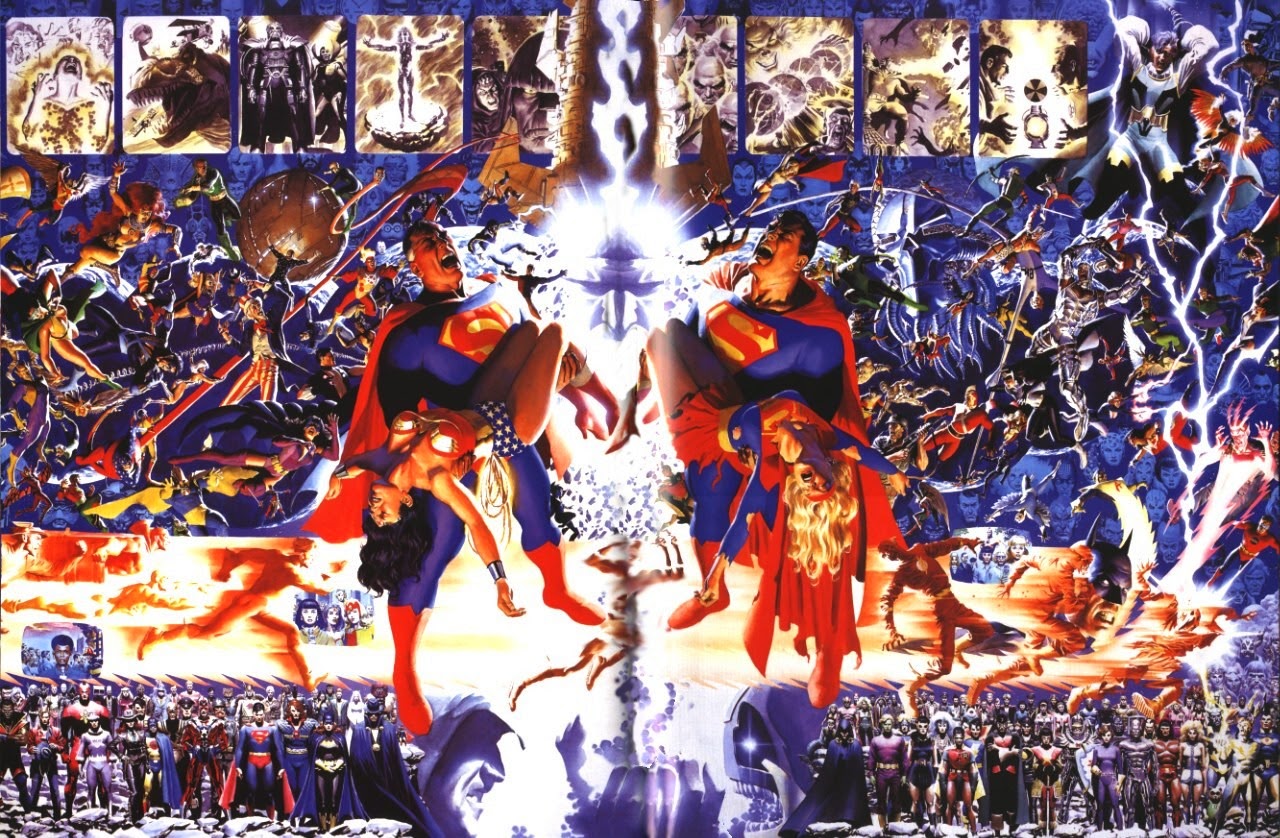 Is this not Ragnarok, The Fall of the Gods?*
Superman, created by two young, American lads from Cleveland, was originally conceived of as a very different character from that which we know today**. It wasn't until they hit upon an incarnation of the character as a heroic individual in the mythic tradition of Hercules, Samson, and others, who fought against evil, and stood for justice and truth, that Superman caught fire in the imaginations of America's youth.

Comic books are our mythology. I'm sure I've said this on the blog before, but it bares repeating. It was actually comic books that got me into D&D. I wasn't intimately familiar with the literary sources that inspired Gygax and Arneson. I was 8 years old in 1977 when I started gaming. I knew fairy tales. I knew the Wizard of Oz (films and books), and some English, Irish and Scottish folklore. At that time however, I knew little of the type of medieval fantasy, or sword and sorcery, from which Dungeons and Dragons drew its 'setting'.

I knew Star Trek, Star Wars, Lost in Space, and a host of other Science Fiction shows and movies. Mostly, I knew Superheroes. My friends and I talked about them all the time. We drew pictures of them. We read the comics, and wrote our own stories about the heroes and villains depicted therein, even before we played RPGs. These were the stories we knew, branded into our heads by a love of them, and multiple re-readings. These are the stories I still pass down today.

I fear there is no way to win this war of mine, since there is not weapon as powerful as my own love of the genre developed over the last 40 years. I have no illusions that I can make anyone get it the way I get it if they didn't share the same experience, but even a glass half full would be nice. I don't expect it to be an intrinsic part of them (my players), but a cap they could put on and feel comfortable with.

How to do this remains a mystery.

In the meantime, I continue my fight, to right that which is wrong, to defend peace, and serve all mankind.***


*Art credit where credit is do. This is the cover to the 'Crisis On Infinite Earths: Absolute Edition' hardcover. It was illustrated by series artist George Perez, and then painting over by the amazing Alex Ross. It has to be one of my favorite pieces of comic book related art ever. My two favorite artists working together on a single piece. Incredible.

**While Superman is often thought of as a boring character (largely due to writers who, IMHO, focus too much on the wrong elements of him), the story of his creation is absolutely fascinating, and worth a little research.

***Recognize this catchphrase? Ever-so-slightly modified, it is part of the intro to the classic, animated TV series Superfriends.