Prepare Yourself For Being Unprepared

Welcome back to Barking Alien.

Sorry it's taken me so long to do this follow up post, but things have been hectic (in a mostly positive way) here at Barkley's Den (mostly positive. mostly).

Today, we're going to teach you how you can prepare a four course Dynamic Dungeon for five or six people, in half the time you'd think it takes.

To start off, you have to understand that most Gamemasters ^#@*ing over-prepare.


***
What Other GMs Do Wrong: Over-Prepare

I'll be the first to say that I over-prepare myself on occasion. It usually ends up happening when I am running a one-shot, especially at a convention. Additionally, I would definitely prefer to be over-prepared than under-prepared. Just makes sense.

That said, the key to an ongoing, dynamic, 'living' (or whatever you want to call it) setting, be it a dungeon, a city, or something else, isn't piles of notebooks, and a metric ton of spreadsheets. No, no, no, my chart and table obsessed cousins.* The secret is preparing not to be prepared. Carefully planning to ad lib. Focusing less on what might happen, and more on what would happen.

Basically, you need not know the ins and outs of every denizen of a Dynamic Dungeon, anymore than you personally know the comings and goings of every person who lives, and/or works in your home town or city. I am certain that in many very small, rural, and even suburban towns, it can feel like you really do know everyone's business, but lets get some perspective.

I live in New York City, and more specifically the central borough of Manhattan. Manhattan alone has over 1,625,150 people. The city, complete with its infrastructure of maintenance personnel, police, firefighters, EMS workers, sanitation workers, and those who run our mass transit system, work and function on a daily basis completely independent (and likely unaware) of me. I benefit greatly from the system of people and services that make this city run, but I don't have much impact on their lives, nor they on mine on a one-on-one basis.

This is how your basic Dynamic (and potentially Ideal) Dungeon works. You don't manage, or worry about, every single individual being in the place anymore than you are currently worried about what that nice fellow who works at the newspaper stand is doing right now. What's he going to have for breakfast tomorrow? Oh no! How can I plan my day not knowing what he'll have for breakfast?!

Chill the hell out.

He will have breakfast, more than likely, and then he will be there when you go to get your paper in the morning. Some stuff just works, and keeps working.

Think in broader strokes. Focus on ways to portray the dynamic nature of a setting so that it feels dynamic. Don't get caught up in the minutia of running a town, and trying to determine every last detail. It serves no purpose, and only bogs you down and burns you out.

Think about it for a moment; how much of the complex economic and sociological matrixes you've developed to explain how the dungeon as living environment works are the PCs actually going to see and interact with? Probably very little. So there is no need for them.

All you need is a little common sense.

Let's look at some techniques for prepping a Dynamic Dungeon.

In your GM notes, place a sheet of paper with the name of your dungeon, and the elements of it's nature that you need to know to run an adventure there. What do you need to know? Well, it will be different for different GMs, but mine would look something like this... 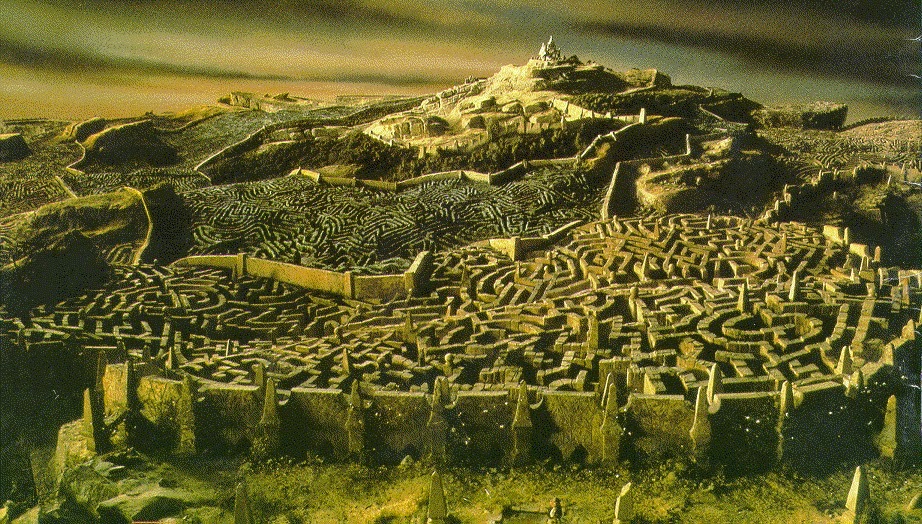 The part of the Endless Labyrinth
will be played by the labyrinth from Labyrinth.

Concept: Greedy Merchant Baron commissions massive, underground labyrinth to hide his treasure, and his daughter. Is tricked by daughter's true love to use his friends as the Architect, The Builder, The Trapmaker, and the Artificer. Friends than tell true love how to get in and past everything. True love runs away with daughter, leaves note to Baron that he left treasure behind. Merchant Baron enters his own labyrinth to find his own treasure, gets lost. Forever.

Inhabitants: Undead adventurers who tried to find the treasure in the labyrinth and never escaped. Skeletons, Ghosts, Zombies, etc. Unique Monster(s): The Juggernaut of the Endless Labyrinth, a clockwork/near-robot metal golem. Super strong, super tough, smart. Knows all the secret ways around the maze.

Special: Cursed location. If you die of starvation, dehydration, old age, or other natural causes while lost in the maze, you resurrect as a 'greater' undead, and continue searching for the treasure, or a way out. If you are killed in the maze by the Juggernaut, or an already existing undead being, you return in a lesser fashion - pretty much a mindless guardian of the area where you died.

Most of the undead are therefore explorers who died searching the labyrinth for riches, and/or a way out. Very few static monsters. PCs are in motion, undead are in motion.

Notes: Possible society of living people, or humanoids (Dwarves, Gnomes, Goblins, etc.) who took up residence in maze when they realized they couldn't find a way out. They have organized various means of obtaining food, and other basic necessities.

That's it. That is the entirety of my initial write up on this dungeon, which incidentally is a major, mythic site on my campaign world of Aerth (for my D&D-But-Not games). No one has ever even found the place. Why do I need more than this?

For the denizens of your dungeon to have a dynamic society, there must be a reason they're there. They're needs to be something they are doing there, or need to do, that requires they live in the conditions of a dungeon. It need not be a complex, 'ecology of the...' reason, but it definitely should make sense.

Why? So that when encountered, the creatures therein act first, and foremost based on the motivation that this [the dungeon], is their home, their fortified base of operations, or what-have-you. When PCs do something in the dungeon, and you as GM need to determine what course of action the inhabitants of this domain take, it is imperative you know why they are there in the first place.

Is this their only home after being driven out of the nearby caves by Dwarves? Is this the only place they can find the rare plant, or foodstuff they need to survive? The inhabitants of such a place will likely defend it to the death!

On the other hand, are they just hired help, brought in by some evil priest or mad wizard to protect a project their employer is working on? If so, do they feel it's worth dying for?

Quo vadis? Where are you going?

That is to say, once you know why the beings in this dungeon are in this dungeon, and you know why they'll move about, and what their motivations are for doing so are, you have to think of where they will go, and what they will do next. By putting some thought into the destinations of the populace should an emergency arise (like an invasion by PC adventurers hell-bent on killing them all, and stealing their livelihoods), you make your Dynamic Dungeons actually feel dynamic without A) having to do too much prep, and B) not having to worry about every, single, individual beastie.

Some will never move because they are mere monstrous beasts, locked in a room to guard something, or because they were caught and kept as a pet by the inhabitants of the dungeon. Perhaps the non-combat types such as children, the elderly, the infirm, etc. will be escorted to safer rooms deeper in the complex by more able bodied, but still non-warrior, denizens. Combat types will move to engage, or search the corridors for the sneaky intruders.

Having a rough idea of who is in there, and where they will go, is what will take you from static to dynamic without making you spastic.*

Take a mental photograph of your Dungeon. Imagine this snapshot is a typical day in the life of all the denizens of this Dungeon. Unless something significant disturbs the routine, this picture you have is a perfect representation of this Dungeon at whatever time of day, or night you imagine it depicts.

This is how your Dungeon looks when the PCs enter it. This is your starting point. Regardless of what they are doing back in town, unless it somehow specifically messes with this picture, the PCs will find the Dungeon looking like your snapshot when they enter it. You need this base picture the way a marathon runner needs the starting line to run a race, or a fairy tale needs some point to serve as it's 'Once Upon a Time'.

I could easily go on, and on with this, but I hope what I have put here so far will help take the edge off attempting to run a Dynamic Dungeon. I mean, IMHO, if you are running a dungeon crawl, you're already running the most boring type of adventure possible. At least these notes may help pump a little life into it. :p

Now let's get to something more interesting. Like Superheroes!


But seriously...let's get back to Supers.

*I apologize to my British readers. I am aware that 'spastic' has negative connotations in your vernacular. Here in the USA it's a slang term meaning clumsy, goofy, uncoordinated and frazzled to the point of making stupid mistakes.

Labels: Advice, Dungeons and Dragons, Medieval Fantasy, RPG, What Other GMs Do Wrong