Have I mentioned this before? I'm sure I have. If I haven't, that's a major faux pas on my part. My bad, sorry.

Now that we're clear, let me tell you one reason why. Generally, it's because they share a not-quite-cool-to-lukewarm, unseasoned, grey sameness that bores the living crap outta me. Oh my stars and garters, save me from the game designers and GMs who feel their dungeons are exciting but feature the same damn 10x10 halls and rooms with goblin sized furniture that are otherwise empty. Seriously. Help me turn my Green Lantern ring upon myself to end my suffering. 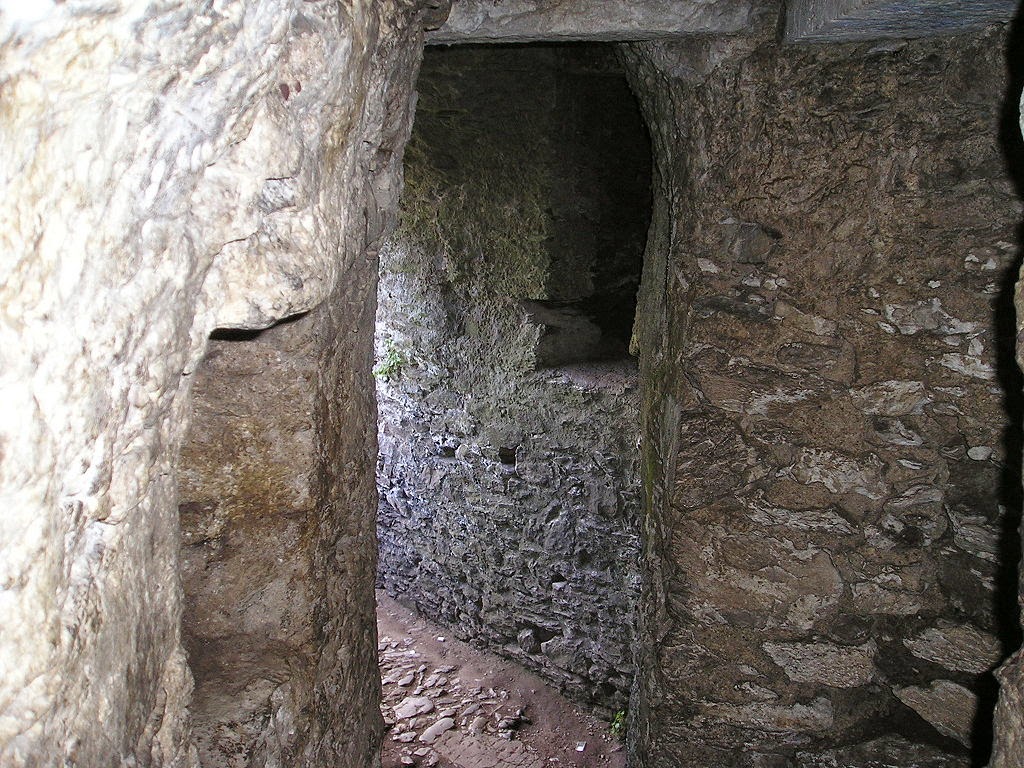 This is part of the dungeon at Blarney Castle in Ireland.
It's so small!
How the hell are we gonna fit an army of angry Kobolds,
a Lurker Above, two Ropers, and an Umber Hulk in there?

Geez.
You'd think they used it to hold prisoners or something.
Worse are Megadungeons.

Imagine waiting in line for an hour or more for an Amusement Park ride you've been on a hundred times before and it wasn't that exciting to begin with. That's a dungeon crawl to me.

Now imagine you're on a similar line, only the wait is about two to three hours minimum and the ride itself lasts a slow going hour or two with no way to get off. That's a megadungeon. Kill my character please! A quick death, early on if you would be so kind, so I can go do something else. This would be vastly preferable to being trapped somewhere in one of these endless malls of the bland and mundane.

Recently, my favorite site that talks about the type of games I don't play (and there by renders itself endlessly fascinating to me), Dyvers, has been doing a series about dungeons in which he analyzes the ideas of the Ideal, Static, and Dynamic Dungeon.

(I know I'm a little late to the party but I've had Superheroes on the brain a lot lately and I just had to get out my thoughts down on them while the iron was hot.)

Please go there to check out his definitions of each one. Go ahead. I'll make some coffee while you wait.

Done? Cool. He says some interesting things about them doesn't he? I think so.

Honestly, I was gonna leave this alone since, as noted above, I do not care for dungeons but the idea that the Dynamic Dungeon is a lot of work irked me. It irked me because I think it's a belief that a lot of GMs have. As a result, they default to the creation of Static Dungeons and Static Dungeons becoming the base standard typifies the boring dungeon and megadungeon designs I so lament.

Furthermore, it just isn't that hard to create a Dynamic Dungeon (or dungeon-like) environment.

This got me particularly incensed (OK, I wasn't really that upset. I just like the word 'incensed'.):

"Consider for a moment that as a Dungeon Master you invest a substantial amount of your free time into making your games better. You draw maps and work on situational responses to your players actions, filling countless spreadsheets and notebooks up with possible resolutions."

First, anyone making spreadsheets for an RPG should stop playing right now and go do my damn taxes. If you think spreadsheets are fun, here's the quarterly inventory list from Home Depot. Knock yourself out.

If you were going to fill spreadsheets and notebooks with the possible resolutions to my players' actions for my old New Jersey crew or better yet my buddy Will's Champions campaign, you would truly need countless numbers of them. I hope you have an infinite amount of paper, ink, and time.

"You read blogs and articles that offer advice and then you come to the table having spent a significantly greater portion of your time preparing for the game than actually playing it."

On the average, it seems like most GMs I've been reading about do this anyway. They blog, read blogs, prepare and design, and then run for a measly four hours. Four. That's 4 hours! This means that A) you are over-preparing, and B) you need to get more time to game if you're going to be putting that much effort into it.

I probably do less physical prep than 75-80% of the D&D GMs out there and my sessions last 6-8 hours minimum. A lot less work and I get double the run-time out of it. Now there is no right or wrong way to game but if this long set up yet short payoff sounds like you, then yes you are DOING IT WRONG.

"Adam, ADAM! What's going on in here? I can hear your font all the way in the other room."

"You're not writing about D&D again are you? Or medieval fantasy in general? You promised me you wouldn't do that. Remember what your doctor said."

"Stephen Strange is a great guy but I don't think he's a real doctor. That's not the point. Yes, I am blogging about a fantasy subject. It's about dungeons..."

"Just, just...let me finish this one post. We can talk about it later."

"Gads! Very well. Tsk tsk. Why do you do this to yourself? Humans."

Dyvers goes on to write:

"Then you begin run the game and you're flipping through your innumerable resources trying to apply the correct solution to your players' actions."

Ah ha! The key to solving the problem, as always, is one of altering perceptions. If this is how you go into it, there is no easy way of getting out.

"Suddenly the game really isn't all that fun anymore because you've burnt yourself out. Dynamic Dungeons are incredibly fun to explore for players and Dungeon Masters alike as they offer a greater challenge for each; however, there is a real danger in preparing too much for the exploration of these dungeons. So how do you guard against over preparing and burning yourself out?"

I'm confused. Why are we having this conversation if you just solved your own problem?

Well goodnight folks! It's been a pleasure and you've been a wonderful audience. Tomorrow on our show, we'll be featuring...wait, what? Elaborate? Do we have time? OK, our stage manager says we have time.

Let's do this right.

We'll be back after these messages...


* I am defining 'Dungeons' here, in this first sentence, as:

"A closed environment, usually full of enemies and loot. Caves and ruins are among the most common forms. In some more open-ended games, outdoor environments might be considered dungeons as well." (Paraphrased from UrbanDictionary.com, on account of their grammar often being terrible).

I should make it clear that I do not mind the occasional use of actual dungeons in a game set in a medieval, European setting. In real life, a dungeon was (as described by Wikipedia):

"A room or cell in which prisoners are held, especially underground. Dungeons are generally associated with medieval castles, though their association with torture probably belongs more to the Renaissance period. An oubliette is a form of dungeon which is accessible only from a hatch in a high ceiling."

** I do not despise all dungeon-like environments to the same degree, but I do try to keep the use of an enclosed, maze or labyrinth-like space, to a minimum in my games. I have been known to run sequences in games that take place in the maintenance tunnels of space stations, through the corridors of starships, in the halls of alien temple ruins, and the occasional death-trap filled supervillain hideout.

In these instances, I try very hard to vary the terrain, conditions, size and shape of the passages and rooms, and the nature of the obstacles the PCs encounter. By not overusing the concept, the 'dungeon crawl' feels like an unusual environment, and a change of pace for my players. If Adam is using a 'dungeon', you know something special is involved.

Posted by Adam Dickstein at 9:57 AM