If These Were The Voyages 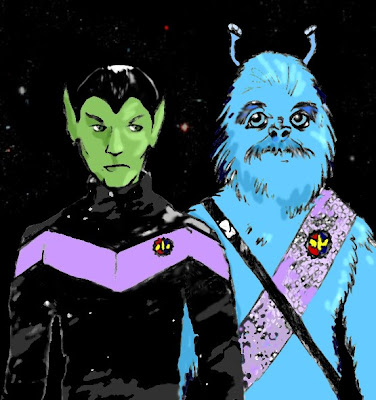 Yesterday I had the pleasure of attending NERDNYC's two-day gaming event/convention known as RECESS.


I had a lot of fun, met some very cool people and played two very good games. I also discovered some surprising things that struck me as quite amazing considering I've lived in New York all of my life.


First, there is only one real FLGS in the five boroughs that really matters and yet there are still gamers close to my age that don't know about it. I find that mind boggling.


Second, apparently there ARE a number of very attractive and intelligent gaming girls in the New York area. I have to assume that they either fall into the category of the above (not knowing about the Compleat Strategist and hence I've never seen them), only come out of temporal suspension to go to conventions or are otherwise normally cloaked to hide their identity (possibly using shapechanging abilities, advanced holographic technology or super-hypnosis).It all makes perfect sense now.


Third, the internet is a terrible depiction of how the old school and new school interact with each other. While diehards exist on both sides of the fence, I found a lot more people who blur the line like myself. Most play the same way they've played for a long, long time, but story and character do matter to them. One fellow said, "I don't want to go all 'Forge'-y. No GM, bizarre cards or things like that but I do want a story. The hack and slash days are over for me. I've grown up. I want more than that."


On another, though related, note, I want to give kudos to a fellow named 'E.T. Smith'. An Old School Sci-Fi chap if ever there was one, he ran a game of Starships & Spacemen which I have to say was excellent. He brilliantly simplifed and expanded the game simultaneously, with custom character sheets, starship reference sheets and a really cool way of depicting space combat. Smith made starship operation, not just combat, a real resource management mini-game within the game which limited what we could do will at the same time making our decisions matter a lot more.


The setting of his 'adventure' (it really wasn't an adventure but more on that in a moment) was Starships & Spacemen's alternate Star Trek-like universe of the Galactic Confederacy; with its logical, green, pointy eared Taurans, blue furred, pacifist Andromedans (which we apparently believed to look like a cross between a Wookiee and Cookie Monster) and the dread Klingon-esque Zangid (who started as swarthy and orange only to be described as giant, angry Oopa Loompa's later on). The session had a feel far more akin to Galaxy Quest than Star Trek but we had a fantastic time. If Goblinoid Games is thinking of bringing this classic game back, they could do far worse than to talk to this fellow first before expanding on the game.


One last point, E. T. Smith didn't run an adventure. What he ran was a series of random encounters based on which of several different hexes on a star map we (the PCs) scanned and than went to investigate. As we scanned more and more systems and random rolls told him what was in each, he started to tie together certain elements of the rolls and soon a plot of sorts made itself known. It was a very Sandbox-y approach that I was incredibly impressed by. I have to say it gave me a new perspective on how to develop stories and adventures for my own Star Trek games. Awesome stuff.


I'm looking forward to going to another of these RECESS events. Sadly I could only go yesterday as I have to work later today.

Until next time, 'Exist For A Large Period and Do Well'
AD
Barking Alien

Posted by Adam Dickstein at 9:45 AM