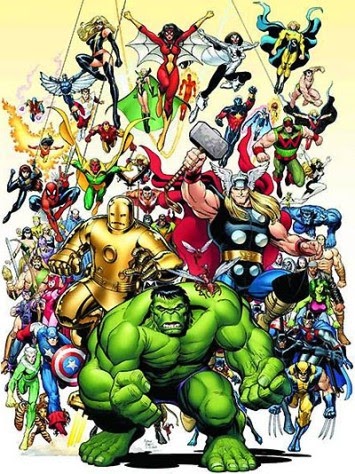 While I have always been more of a DC fan, I am by no means unfamiliar with the House of Ideas and the universe that centers on Earth 616 (The default Marvel Comics mainstream universe).

I was an avid collector and reader of Marvel in the days of Claremont and Byrne's X-Men, Shooter, Stern, Perez and Byrne's Avengers, John Byrne's Fantastic Four and Michelinie and Layton's Iron Man. I even followed a good bit of Marvel's Ultimate Universe in later years, being especially fond of The Ultimates and Ultimate Spider-Man.

At present I am loving the current take on the Fantastic Four, the new Ultimate Spider-Man and some of the Avengers comics, although I was monumentally disappointed by the Avengers Vs. X-Men story (and when I say 'story' I am being awfully kind).

Several recent discussions about Marvel Heroic with friends prompted me to formulate some alternate ideas on how to run it for a short campaign.

One of the drawbacks of the Marvel Heroic game in the opinion of several of my players, friends and indeed, myself, is that you don't really have a mechanic for improving your character all that much. It has been noted by the games designer, Cam Banks, that comic book superheroes do not really improve, they change. At some point Spiderman has the Black Symbiote suit, then he doesn't and he loses his powers. Then he regains his powers and he grows extra arms, etc., etc. The plots of the comic book stories modifiy the heroes horizontally more than vertically. They don't 'raise in power level' so much.

Now why is this a drawback? Mr. Banks and company would likely note it as a feature! He may be right but it is not viewed as such by my group. We are role players but also gamers and gamers want to get points and improve. We want to get rewarded for putting all that effort into playing our characters and also we like to see and show progress.

The funny thing to me is that Marvel Heroic puts such a focus on Milestones as a list/source of how to get XP rewards but then there is comparatively little to do with the XP once obtained.

This got me thinking about an alternate way to spend XP.

What if you could combine these concepts of lateral changes, Milestones and XP in order to set up player generated plotlines?

Imagine the GM or Watcher sets up an event involving the Negative Zone turning sorta inside out and pouring into our universe through some portal in Reed Richards' lab in the Baxter Building.

In the process of trying to reverse the effect and undo the damage, Reed Richards and Iron Man manage to rack of a good chunk of XP. Once the day is saved and the Event finished up, the Iron Man player hands a note to the Watcher. He asks that the Watcher add a subplot to the next adventure involving Iron Man discovering that his armor is now charged with particles from the Negative Zone.

The Watcher (as Editor-in-Chief and Head Writer) has a 'Bullpen Session' with Iron Man's player (Co-Plotter for the next arc). They discuss the general idea the player has (the Negative Zone particles have altered the suits abilities but at some minor drawback). The Watcher thinks it's neat but asks what the long term goal is. Iron Man's player replies that he wants a suit of armor specifically designed to battle in the Negative Zone.

The Watcher than tells the Player, "OK with these conditions. The longer the N-Zone particles stay in our universe without the proper adjustments, the more critical the Complications or Limits that armor will suffer. How's that for comic book consequences?"

The two agree that if 30 XP are spent, Iron Man can RESET, returning to his original armor with it's original abilities by, oh I don't know, using the Fantastic Four's Cosmic Dispersion Field to rid the suit of the N-Zone particles.

If Iron Man spends 40 XP and spends part of a session out of action in his workshop, he can REVAMP, returning to battle in his new Iron Man Mark-N Armor while his original, standard suit of the time can be 'seen' in the background in storage.

Finally for 50 points, Iron Man RETCONS the situation. His suit was never imbued with Negative Zone Particles but instead the Negative Zone particles reacted in an unsual way with his Repulsor Ray Systems, creating a new energy form. Iron Man doesn't sit out any action if he can find a sensible moment where he can say he had gone back to his workshop or had moved the proto-type nearby to test it. Off-Panel. Otherwise, he needs to sit out a Scene or two and returns with an all new Armor. This new Armor should actually have one or two improved or totally new abilities even if it makes for a larger than normal Power Set.

In a fashion this isn't much different from the way it is in the game now but my goal, hopefully, is to set in motion and play out individual story arcs in which both the player and the Watcher have a say in how it is built.

Also, the idea is to make a big change in the status quo of a character cost a bit more. Basically, real improvement or at least additional options become available but the player will know in advance that in order to get that big payoff he needed to focus on hitting those Milestones for the better part of a multi-session arc.