The RECESS Report - Part I

I'd like to preface this entry by saying it should have been posted much sooner but it's been a doozy of a week lads and lasses.

In additional to seeing my girlfriend Jenn perform last Wednesday, running two games at RECESS and spending additional hours at the Learning Center on Sunday (more about that at a later time), my Mom hooked me up some freelance illustration work. A client of hers needed some drawings to go with a presentation of some kind. While I love being about to get paid to do something I enjoy, it wasn't the easiest job and had a very tight deadline.

So, on maybe seven hours sleep in the last two days, here is my report on the one, the only...RECESS!

A Day At The Races, A Night At The Muppet Theater

This RECESS was unique and special to me in many ways. First, and foremost, my girlfriend came to watch me GM. She has sort of seen me in action before but mostly what she's witnessed is the BSing my regular group does before we actually start playing. It was sooo awesome to have her there.

At her gig last week in New York's Greenwich Village, I met one of her friends, a woman named Lisa who, it turns out, has known Jenn since they were little kids. It also turns out that Lisa is a huge Muppets fan. Jenn told her a bit about what I would be doing at RECESS (that is, running a Muppets Role Playing Game) and Lisa wanted in.

I met up with Lisa at the event after I found my table and we waited for Jenn and for the game sign ups to get underway. At about 15 minutes to game time I had only 1 person signed up for the Muppets, not including Lisa who was waiting for the staff to call her number.

I decided to go up front and play barker (as in Barking Alien? Aaahh! See what I did there?) in an attempt to drum up some interest. No sooner had I asked the crowd, "Hey gang, what's up? No love for the Muppets?", than one of the staff members tapped me on the shoulder and said, "Dude, you've got 5 people already".

I did an honest to gosh double take. In the 25 seconds it took me to get up to the front, whirl around and start to pitch it, four more people signed up for the game. Lisa confirmed the time.

I ended up with the following players: An incredibly tall fellow named Matt, his equally towering brother Chris, Matt's wife Lily, Lisa and Emi, young lady who's boyfriend would end up playing in my later session of Galaxy Quest.

Neither Lisa nor Lily had every played a role playing game before and I was ecstatic to be the one to usher in their inaugural experience. It's like I've said many time, I don't know why people automatically assume D&D is a good starting point to get non-gamers interested. What's always worked for me is recognizable brands or IPs of these people would be familiar with thanks to pop culture so there is little need to explain what the game is about. Have you read a Spider Man or Captain America comic? You have? Awesome. Marvel Heroic is like that (as an example).

On to the game itself...

Me: As Kermit: "Not now guys, I'm in a jam. The guest cancelled and the show is about to start."

Bunsen: "Then you're in luck Kermit. Say hello to our latest invention - The Muppet Lads Celebrity Time Displacement Shower." 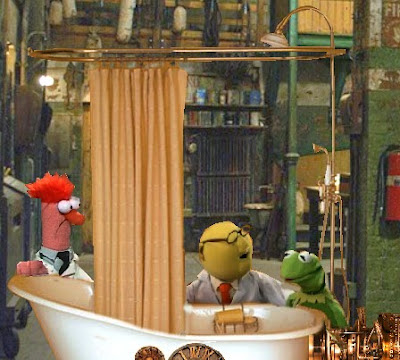 Bunsen: "Celebrity Time Displacement Shower. It can transport any celebrity in the past from their shower to this one. All we have to do is match the water temperature, adjust the suds, close the curtain and power it up."

Bunsen: "Well, it has yet to have a full fledged test run but in theory it should work perfectly."

Kermit: "You know what guys...go for it. I believe in you. That's what the Muppets are all about isn't it. Get this thing up to the guest's dressing room and bring us a star."

Bunsen and Beaker head upstairs, set up the machine and within a minutes or two the device is whirring and banging and steam and flashes of light are all around it. After a loud pop and a bright, white flash, the two Muppet Labs scientists can hear singing in the shower. Then another voice. Then a honking horn. Startled, they pull back the shower curtain to reveal... 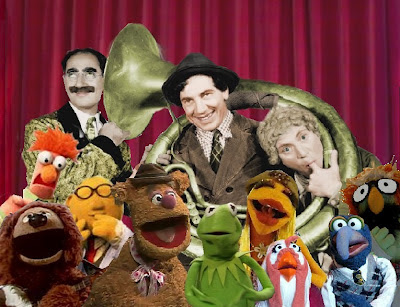 The basic plot of the episode was that the Marx Brothers were sent through time to be on the show but would have to return so as not to damage the time stream.

At the same time, the machine that brought them here, a steampunk contraption of Muppet Labs origins, had both a leak and a clog in its pipes creating numerous time paradoxes and time travel hazards. 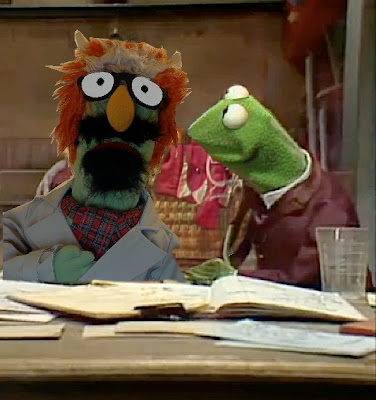 For a subplot of sorts, entertainment critic P. Hamilton Monstros (of the South Hampton Monstroses of course, as he never tired of reminding everyone) has come to the Muppet Theater to do research for an article series he is writing. Kermit is initially excited until Mr. Monstros reveals the series is entitled, "Modern Vaudeville: A Really Bad Idea". Kermit vows to show him he's wrong, if only the guests, the Muppets and time itself will oblige him.

Matt's Bunsen and his technobabble theories of how the Time Machine Shower worked.

Matt as Bunsen and Emi as Beaker had great timing and worked well together.

Chris as Gonzo The Great, gets inside a cannon that is then placed inside another, larger cannon. So one cannon fires out another cannon which fires out Gonzo. It would've proved a fantastic stunt if it had worked. No chickens were harmed in the making of this scene.


Lily did a very cool and active Miss Piggy. Great routine between Piggy and Groucho. She also did a pretty good Sam the Eagle and we did Sam with Chico and Harpo in a routine that mixed parts of 'A Night At The Opera' and 'Horse Feathers'.

Lisa must be applauded for her Pepe, the King Prawn, Hokay? Very good and very heroic portrayal. Pepe, being a Prawn, offered to swim down the drain, through 'de time stream, hokay? and find out what was clogging the drain. He did so and it turned out to be the fur of Bobo the Bear. Bobo, still attached to said fur, was trying hard not to drown or be swept back in time. Needless to say, he had his hands full.

One of the better Veterinarians Hospital sketches. I helped as Rowlf who no one chose to play initially.

Behind The Scenes Notes

The guest who had to cancel was Bernie Brillstein and his Beatnik, Barber Shop Quartet.

The magazine P. Hamilton writes for is called We Know Entertainment! And You Don't.

The 'P' is his name stands for Pretentious. Character name is a joint effort by my girlfriend and myself.

I actually found Hamilton in the garbage about three weeks before the game day. He is one of the F.A.O. Schwartz Toy Store 'Build Your Own Muppets' and someone just threw him away. I picked him up and checked the puppet for stains and damage. None. He was on top of (not inside) a thick shopping bag and must have been disgarded very recently when I saw him.

One player told me I did an excellent Harpo Marx impression. I reminded her that Harpo is the one who doesn't talk. She said, "And still...I know it's him every time."

During a minor lull used to take bathroom and food runs, one or two players suggested doing the sketch where Kermit interviews the guess star. I said sure, we could do that, but right now I am playing all the parts myself. I was Kermit, Groucho, Chico and Harpo. The players said that was no problem. One said, "I am fine with listening to you just riff off yourself for the next twenty minutes. You're hilarious."

In addition to the Marx Brothers, the leak in time brings forth Vikings, Cowboys and Roman Legionnaires from the past.

I am a huge Marx Brothers fan, as was my Grandfather. Thanks in large part to him I have seen virtually every Marx Brothers movie a dozen times, as well as Groucho's days as the host for the game show 'You Bet Your Life'.

This Muppet Show session of the Muppets RPG was dedicated to my girlfriend Jenn for all the inspiration and support she gives me and the late Jerry Nelson, who recently passed.

Posted by Adam Dickstein at 8:04 PM