Modern Children of A Silver Age

With a new school year having started, I have likewise begun a new 'semester' of my Role Playing Game/Creative Storytelling and Writing class over at the learning center in Brooklyn where, hopefully, I will be expanding my teaching to other kids and subjects very soon. I am pretty excited but also a little nervous. Some of what I will be teaching will be math. Me. Math. At least I'll be teaching 3rd grade math so I may be able to get a handle on it.
As for the RPG/Writing Class, we have decided to go with a short Superhero campaign. It was a pleasant surprise to me that after trying a few Supers sessions during the summer program a lot of the kids wanted to give it a more serious and dedicated go. The fact that it was so popular among the students is especially interesting to me since the vast majority of them are not really familiar with traditional American superhero comics. 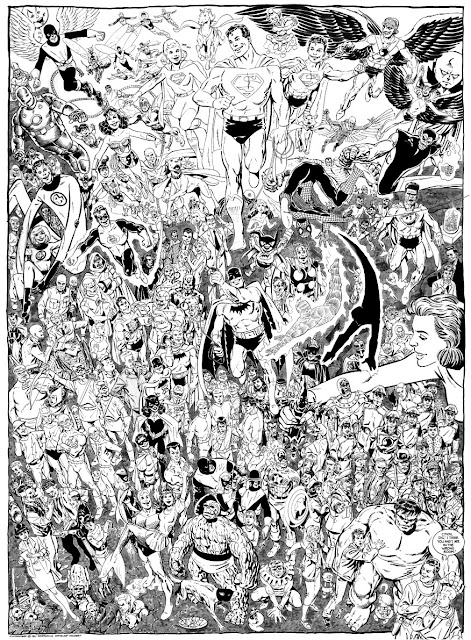 While a few of the boys in the class have seen Superhero movies and cartoons, none of them read American comics. That's right DC and Marvel, none of them. Next time you think up one of your amazing marketing plans like Avengers Vs. X-Men or, for the love of Krypton, The New 52, just bare in mind that not one of my dozen students, grades 3 to 6, are aware of them. I started reading and collecting comics when I was very young and kept doing so until recently*. If none of these guys or their friends are reading comics now, how many do you think will be reading them into their 40's?

An even more amazing thing to me about this group, in addition to having no comic book fans to speak of, is that the characters they came up with are spot on late Golden Age to Silver Age style heroes. Whoever is sitting in the Big Two's head offices thinking today's youth want to see edgy, dark, angst ridden anti-heroes needs to sit in on a session of my game with these kids.

Electrode
Electricity Powers including transforming himself into a bolt of electricty, the ability to call lightning out of the sky and a short burst of superspeed he calls Lightning Dash.

Force Full
Great name in my opinion. Telekinetic shock wave/vibrations called Force Waves, a Wall of Force and Wings of Force that enable him to fly by vibrating the air.

Gravity Man
Gravity Control including making things lighter or heavier and the power of Size Change, both growing and shrinking. Common tricks include making himself really heavy at a small size and flying by floating like a balloon (I'm so light I'm floating away - I'm heavier - I'm lighter - I'm heavier...).

Ice Girl
Like a combination Iceman from the X-Men and Zan from the Wonder Twins, Ice Girl can freeze things or create cold with her Ice Powers or transform into an iceberg, a sheet of ice, a localized snow storm or a large volume of freezing water. Form of...A Glacier!

Multiple Miracle
A very cool take on the cloning character, M&M (as his friends call him) can make copies of himself with his Duplication Power. By touching another character, he can copy their super power and then touch one of his duplicates and give the power to them. Lastly he can cause the clone/duplicates to shape shift and resemble other people. He is a one man superteam!

He does come with a few weaknesses however. He needs to speak to his duplicates backwards for them to understand him as they hear and speak backwards themselves. It would seem they are 'mirror images' of the original. Also, he copies and transfers superpowers at a level weaker then the person he got them from.

Nature-X
Elemental,  mystic/druid type with power over Plants, Earth and Rock and the ability to Heal. Who was it who said Superhero Clerics weren't a cool idea? ; )

His weakness, which has been pretty funny in the way other players have reacted to it, is that he is constantly radioactive and none of his teammates can stand too close to him or his constructs for too long without feeling sick. He is also weak against lead or lead lined items.

Robocon
Young inventor with a forty-five foot Giant Robot that can change its hands into any weapon, tool or gadget. We have seen a drill hand, hands with finger missiles a la' Shogun Warriors Mazinger and a radar/sonar dish hand used to locate the bad guy in the third session. He also has a smaller Robot Dog.

We discovered a bit about his origin in the latest session when we found out (thanks to quick fluff added by the player) that his robot was originally a disgarded invention of the techno-genius super villain, Doctor Malice.

Whiplash
Interesting power combo. Whiplash has a Reflection Field that reflects any attack against it back at the attacker. She can also bestow this Reflection Field on others. Lastly, she can weaken the material strength of objects making them more flimsy or even brittle.

I imagine them all hanging out in their headquarters (simply called 'The HQ' by the team), waiting for the call from the Mayor or Police Commissioner to fight against the forces of evil and injustice in their four color costumes and domino masks. 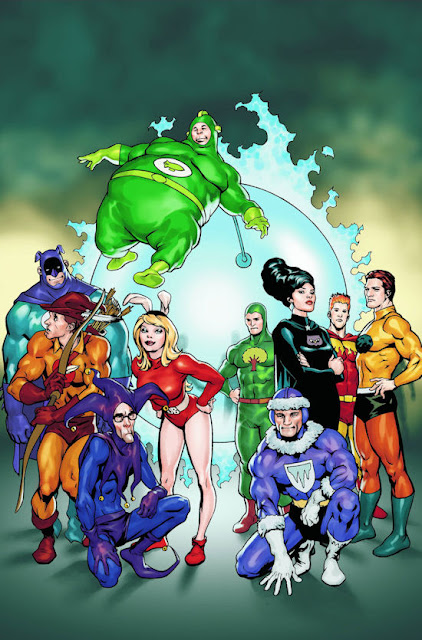 So far, the PCs have thwarted an attempt by a group of criminals to steal gold bars, hide them aboard a cargo ship and escape. The ship was backed up by a hidden submarine, initially disguised as a mid-sized yacht. Eventually rendering the advanced submarine inoperable and capturing the criminals and the stolen gold, the heroes find out that the heist wasn't for the money. Rather, the evil mastermind, Dr. Malice, hired the crooks to steal the gold so he could use it to build some sinister invention. Egad!

Ah yeah! Silver Age Superhero Action at its best. There is nothing like it old chum...