While Adam attends to our guests in the Green Room, I would like to take this time to introduce a very special surprise for the studio audience, and the viewers at home. Coming to you all the way from the Trailing Extensions of the Whirlpool Galaxy comes the great seer, soothsayer, and sage, Carnac the Magnificent!

Thank you Mr. Barkley, thank you. May the filthy soap scum of a thousand bathtub rinses avoid your private parts.

Thank you Carnac, you are too kind.

Now then, I hold in my hand a set of envelopes. As a child of four Earth cycles can plainly see, these envelopes have been hermetically sealed. They've been kept in a #2 mayonnaise jar on Funk and Wagnalls' back porch on Earth West-38 since noon today. No one knows the contents of these envelopes, but you, in your borderline divine and mystical way, will ascertain the answers having never before seen the questions. 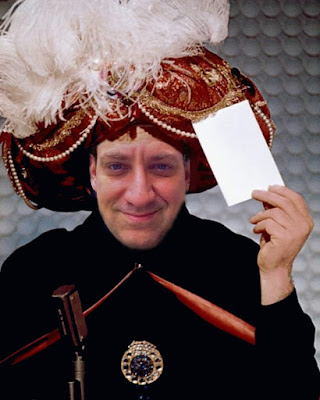 The answer is..."Expedition to the Barrier Peaks."

Expedition to the Barrier Peaks.

The question..."What is the term for attempting to look at your wife, or girlfriend's bosom, while her parents are in the room."

I just said that. The question is..."Name three things easier to swallow than Donald Trump running for President."

The answer is..."Nasty, Brutish, and Short."

The question is..."Describe the history, as you understand it, of comedic RPGs."

I haven't had time to do a lot of research, and as such, I am unlikely to be as thorough as Lowell Francis is when he does his 'History of...' posts (which are oddly not tagged in such a way that you can just pull them up. A tag of History would make them much easier to search for IMHO).

The very first commercial RPG with a purposely humorous focus, as far as I can tell, was called Alma Mater. It was produced in 1982 by a company known as Oracle Games. Supposedly, the art for the game, by Dungeons & Dragons legend Erol Otus, so deemed so offensive, the game was banned from the GenCon.

I don't think the game was overly popular, as I've never heard much talk about it, hadn't seen a copy until much, much later, and it's definitely not one any player I've played with regularly has ever mentioned.

And I've played with a pretty diverse bunch.

One could certainly argue that Alma Mater was preceded by another game with a distinctly humorous tone. That game was Ken St. Andre's Tunnels and Trolls. While not specifically a comedy game, Tunnels and Trolls, first published in 1975 by Flying Buffalo, Inc., had a rather tongue-in-cheek attitude to many of its elements, including spells with names like 'Take That, You Fiend', and 'Hidey Hole'.

Furthermore, Flying Buffalo put out another game called Monsters! Monsters!, in which PCs turn the tables on the traditional Fantasy character dynamic by playing the creatures that live in the dungeons being invaded by adventurers.

Over the next few years, no significant entry into the field of humorous RPGs is even made. Role Playing Games, into the early-to-mid 80s, are serious business.

Thankfully, that all changed with the arrival of Toon in 1984.

The story goes that the idea for the game originated with artist, and Villains and Vigilantes co-creator Jeff Dee. Dee was with Greg Costikyan, as well as other game designers, trying to figure out what genres where not yet covered in the field of RPGs. Dee suggested a RPG based on Cartoons. The rest of the assembled talented said, although a great idea, created a system for such a game would be impossible. A few years afterward, with the help of Warren Spector, Costikyan created Toon.

Greg Costikyan is, in some ways, the unofficial father of the humorous RPG. In addition to Toon, Costikyan was also a key designer on Paranoia from West End Game, which came out in the same year, 1984.

While the ball was now rolling, the next two entries were licensed games, and so their popularity may have been more closely tied to their IPs, at least initially. Palladium's Teenager Mutant Ninja Turtles and Other Strangeness, and West End Games' Ghostbusters were hits, and while no where near as big as the big boys like D&D, Call of Cthulhu, or even Traveller, the gaming consumer had spoken, and been heard loud, and clear. Comedy games were a hit.

Proof positive was the fact that it didn't end there. Not by a long shot. Teenagers from Outer Space, Macho Women with Guns, Tales from the Floating Vagabond, HoL and many, many more followed. A not really complete, though decent list can be found here.

The independent publishing movement of the last 10 years, or so really helped in this area as well. Some of my personal comical RPG favorites such as The Secret Lives of Gingerbread Men, Doom and Cookies, and the recently released Spirit of 77 were all made possible by the indie game boom.

Interestingly, since this is something I am going to discuss in a later post, not all this humorous games are billed as comedy RPGs. Spirit of 77 is very funny, but it isn't sold as a humorous game. Likewise, HoL, and Doom and Cookies can be quite dark, though this is a definite comedic tone to them.

Well, that's about all I want to say on the subject for now. I highly recommend looking into the history of comedic RPGs, and Role Playing Games in general, as it is some fascinating stuff.

The Designers and Dragons series and Heroic Worlds by Lawrence Schick. Also Age of Ravens of course, as Lowell does a bang up job in this regard.

Thanks for watching! Now, back to our show...