The Jokes On You

Ladies, gentlemen, and little, blue, furry things from Antares IV,
we here at The Barking Alien Blog are proud to present,
(well maybe proud is a bit of an exaggeration)
The Tea Time Movie
with your host, Art Fern! 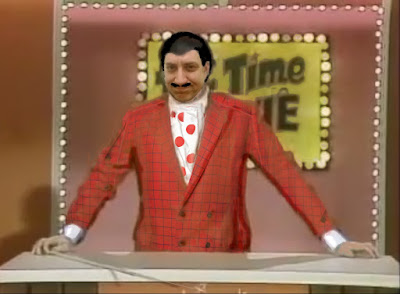 Good afternoon feature film freaks, and friends, welcome one, and all to the Tea Time Movie. We have a wonderful, classic selection for you today.
Sean Bean, Orson Bean, Mr. Bean, Mr. Potato Head, and the ghost of Orson Welles star in, 'One Ugly Spud'.
Yes friends, but before we get to our film, your dollar doting pal Art Fern has a double-down deal for you. The kind of deal you can't pass up, though you could pass out. Friends, we're talking about a sure fire, firecracker, of a crack up for sure. And to assist me in introducing this miraculous product is a miracle of modern medicine herself, our very own Matinee Lady! 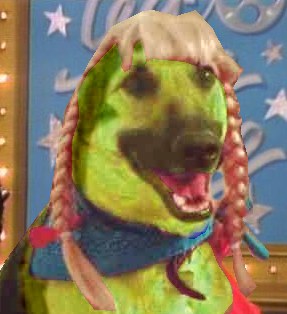 Um...Barkley?
Why are you dressed like that?
Where's the beautiful woman?
This is the best I could do on such short notice.
And with our budget.
We don't have a budget. We're not paying.
Exactly.

Friends, do you tire of the same old routine? Have you gotten stagnant, lazy? Has your get up and go, gotten up, and went, refusing to send you a forwarding address?

Do you need a boost of adrenaline, a shock to your system, a Bang Bang in your Chitty-Chitty?

Well then friends I have just the thing for you. Comedy!


Let's face it, the best laid plans of mice, and men often degenerate to Yoohoo shooting out of someone's nose.

All this laughing, joking, and clever wit, yet few things frighten even a seasoned gamer like being asked to run, or play in a humorous game. Why?

Well, in the first of a series of posts*, I'm going to try to look at that very question. More specifically, I'm going to break the big question of, "Why don't we all run, and/or play, more humorous games, more often?", into several smaller queries.

The first of these, this one, is really, "Why do [most] gamers shy away from comedic RPGs, and what can we do to change that?"

The first, and most basic reason (although not the biggest reason - which I will get to in one of the follow up posts) is simple:

Most people think, "I'm not funny."

Now there are variations on this. "I'm not funny" could mean:

"It's hard to be funny on purpose."

"It's a lot of pressure to be funny all the time/consistently."

These concerns are valid. As in, yes, these are real anxieties around the subject that people have, and it holds them back from trying, and therefore gaming comedic games.

What? You thought I was going to say "Popycock", "Rubbish", or "Get Offa Yer Candied Arse, and Man Up Ya Wee Scunner."? Shows what you know.

OK, normally I would, but comedy is different. Not everyone is funny. 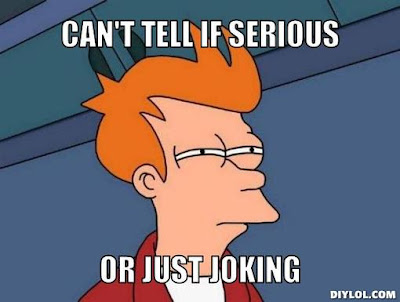 Everyone has a sense of humor. There are always things that a given individual finds funny, although it certainly differs from person to person.

Being funny however is a skill, a knack of sorts, and involves empathy, timing, a good grip on language, and in some cases being physical adept. Sure some people have a gift, and in a way it is not unlike a person gifted with artistic ability. You either have it, or you don't, but it can be practiced, honed, and expanded to a greater level.

So if you weren't intimidated to run a humorous game before, how ya feelin' now?

Yeah...sorry. Let's get back on track.

So you think you're not funny. What can you do about it?

Well the first thing you should know is you don't have to be the king of comedy to run a comedy game. That is the first, and biggest misconception. You do need a sense of humor, and like I said, we all have one of those, but you need not be hysterically funny.

Remember back up above when I mentioned that nearly every game eventually degenerates to movie quotes, humorous analogies, and terrible puns? Great. Let it.

Who says you have to do all the heavy lifting? Very likely, two thirds of the humor in your comedic game will come from the players, just as two thirds of it does in your usual campaigns. You need to get good at recognizing humor when it happens, so when they (the players) set off some crazy joke you can run with it, and incorporate into the game.

Akuma is a Japanese word meaning demon, devil, or simply evil spirit. It is the name of a character in the Street Fighter series of martial arts video games (he is called Gouki, or 'Great Spirit' in Japan).

Kumite (Japanese - literally translates to grappling hands) is a sparring match associated with a particular form of karate. Sometimes in English, it is pronounced koo-me-tay, and means "a karate match".

Some friends, and players tripping over the words gave me the idea for a Teenagers from Outer Space adventure in which one of the PCs, a huge martial arts enthusiast, wins tickets to a kumite. He later discovers that A) it's an Akumate - a martial arts tournament of supernatural, underworld beings, and B) the tickets are not for watching the fights, but contracting the bearer to be in the fights.

If you win you get riches, or increased powers or something, but if you lose you are banished to hell where your soul rots for eternity. Muhuwahahaha!

When trying to explain to the head demon lord that he didn't belong, one PC said he wasn't a demon, but a mortal Human. His buddy backed him up saying, "He not akuma!"

Cue another player doing a Schwarzenegger impression, "It's not Akoomah!"

The joke later found it's way into a Marvel Comics RPG game referring to Attuma, the mad Atlantean nemesis of Prince Namor, The Sub-Mariner.

"I don't know who attacked the Navy Base, but it's not Attoomah."

Remember how I mentioned the common lament that it's hard to be funny on purpose?

True, it can be, but it's easy to be funny by accident. Sorta kinda. I'll explain.

The story I told above is one of many where the adventure, the humor that went into making it, and the jokes that came out of it, were all a series of accidents.

I hadn't initially planned a session where the PCs get involved in an infernal mixed martial arts championship. No, no, no! That is not how that went down. I heard some buddies talking, there were some mispronunciations, a play on words, and the next thing you know I had an adventure idea. The rest came out of the players mouths during the game. Seriously, I had little to do with it.

In a future post I will talk a bit more on this subject, and hopefully give the fledgling comedic GM some pointers on being funny on purpose, or at least excellent ways to fake it.

For now let's end with the last of the major obstacles noted above, the pressure to consistently be funny.

This problem, like so many others, is one of perception. In all seriousness, no one is pressuring anyone to be funny all the time, except you. What I mean is, you're doing to yourself, so cut it out. It doesn't help. There is enough pressure in life. Don't add any to yourself, or your game.

And who says you have to be funny all the time? The best comedies, be they television shows, movies, games, or what have you, must have drama, action, mystery, suspense, perhaps a bit of romance, in addition to yuks, and guffaws.

I ran a Ghostbusters game that made a grown woman cry. I had people at the edge of their seats in Galaxy Quest. I've added a strong humor element to many games that are generally thought of as serious as well, such as Traveller, Mekton, and Japan's SATASUPE Remix (more about that awesome game this Thorough Thursday!).

The trick is, control the amount of comedy you're comfortable with, and you can easily run a humorous game because you control how often 'all the time', and 'consistently' happens. Place one to three oddball NPCs, and a wacky situation in one session, a play on words in the next, and then have the following session be downright serious outside of the side jokes you know full well your friends are going to make.

Again, the best comedies have stretches of seriousness. The Incredibles is a very funny movie, but Syndrome really is an evil bastard, and the Omnidroid could really have wrecked the city. Galaxy Quest is hilarious, but Saris has tortured, and would kill the Thermians. Gozer wasn't kidding around in Ghostbusters, whether it looked like a sexy lady, or a giant man made of marshmallow**.

Well, that's some of my thoughts on the subject, with a lot more to come. This post, this one right here, is why I really wanted to dedicate this month to humorous games. I hope this helped those who are a little comedy game shy to at least think about them a bit more...er...seriously.

Any questions, or comments on the subject are more than welcome. I'd especially like it if you have some aspect of comedic gaming you'd like me to address. If you do, let me know!

And now back to our show...


*Yes! It's a series of posts during the month of September, which is itself a themed month about Humor. It's a series within a series! Whoah. Mind blown.