WBARK would like to apologize for the delay in posting this entry, which was actually completed last Thursday, September 3rd, 2015.

The program was pre-empted by the Interdimensional Grav-Ball Championship.

We are pleased to now broadcast this in its entirety.

Welcome back to the show everybody.

Our first guests this month need little introduction, but as both the show's host, and a fan personally since I was very young, I would feel negligent in my duties if I didn't say something.

Awarding winning stars of television, film, comic strips, and merchandise galore, the genius of their work, and the warmth, and sincerity in which it is delivered, is not to be denied.

On November 6th, 2015 a new generation will get the chance to laugh, love, and be charmed by these talented characters, as a CGI animated film with a very distinctive look, strikingly similar to their newspaper strip, and traditional animation origins, arrives in theatres nationwide.

Ladies, and gentlemen, please welcome to the program...

Charlie Brown: What did he say?

Lucy: I don't know. I can never understand anything any adult says. It's just this wah-wah noise.

Well I'm happy too. I couldn't be more delighted. I've been a big fan since I was a kid myself. So, tell the viewers a little about yourselves, your history, and what you've been up to lately.

Charlie Brown: Talk? About myself? In front of all these people?

Pattie: Come on Chuck, man up. Give the people what they want Chuck!

***
Prior to this post, I have only tagged the Peanuts, the family favorite comic strip, and animated characters created by Charles M. Schultz, one time on this blog.

I may have mentioned them briefly perhaps once, and I have depicted characters in Schultz's art style.

Peanuts really began in a weekly, panel comic strip called 'Li'l Folks, which Charles Schultz did for his hometown newspaper in St. Paul, Minnesota. The strip ran from 1947, to 1950.

The name Charlie Brown was first used for a series of characters in that strip, all of whom were the butt of some joke or other. A dog, looking very much like the early renditions of Snoopy, would also appear in that comic periodically.

After his local paper dropped Li'l Folks in 1950, Schultz took what he believed to be his best work from the strip, and tried to sell the idea to United Feature Syndicate. UFS said yes, and decided to pick up his comic. However, some changes were made, and UFS, and Schultz decided to run what was essentially a new comic strip by the time is was ready to go to print.

The new strip was largely the same as his previous one, but instead of one-shot characters, and gags, Schultz decided to create a distinct cast with particular traits, personalities, and reoccurring, or running jokes.

To avoid confusion with Al Capp's Li'l Abner, and another strip titled Little Folks, the syndicate settled on the name Peanuts, named after the Peanut Gallery featured in the Howdy Doody TV show.

Peanuts was a title Schulz always disliked, as he would reveal in interviews much later on. He felt is was an arbitrary choice, with little meaning, or bearing on the comic strip, or its characters. It is for this reason that the various collections of his work, and most of the animated specials, do not use, or refer to the name 'Peanuts' in their titles. Rather, it's 'A Charlie Brown Christmas', and the strips in paperback form typically had either "Charlie Brown" or "Snoopy" in the title.

The first Peanuts comic strip appeared in October of 1950 in nine different newspapers. The Peanuts would go on to become one of the most popular newspaper strips in history, appearing in newspapers all over the world, and translated in over fifty different languages.

Following their approved use in a series of commercials for The Ford Motor Company, the Peanuts appeared in their first animated television special in 1965, A Charlie Brown Christmas. The special won both an Emmy, and a Peabody Award, and would pave the way for a number of additional specials (Twenty all together!), two films, and an ongoing animated series that ran from 1983 to 1986. A theatrical play, You're A Good Man, Charlie Brown, created in 1967 as a musical comedy, is but one of the stage versions of Schultz's work. Amateur theatre companies has also done versions of A Charlie Brown Christmas, and A Boy Named Charlie Brown.

The popularity of the Peanuts doesn't end there...


A new CGI animated film is slated for this November, with a really great visual style in my opinion. I am very impressed with what I've seen of it so far, a fun and faithful adaption of the Peanuts' 2D cartoon look to a 3D-ish computer animated feature. 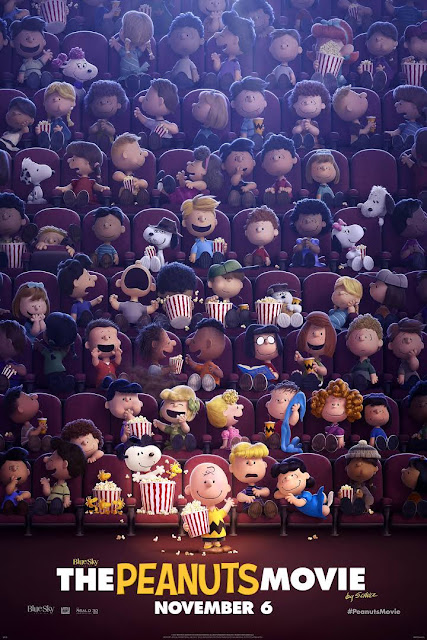 Now on to the question on everybody's mind...OK, on my mind, and the mind of perhaps a few others:

What about a Peanuts RPG?

No official Peanuts Role Playing Game has ever been produced, in any format (tabletop, video, or computer game) as far as I am aware. Now, have I ever considered creating one? Yes, of course.

It would be an interesting project I think. Although the characters originate in a comic strip, and animated vehicle, they are not characters who follow cartoon physics the way ones in Toon, or even Teenagers from Outer Space would.

The strong, and distinct personalities, interpersonal relationships, and middle-American suburban setting do lend themselves to some great storytelling opportunities though.

At the same time there is Snoopy, who seems to sometimes live in an imaginary reality of his own mind, such as when he believes he is a World War I flying ace casing down the Red Baron. We've also seen him defy normal physics, and rational logic when in the presence of Charlie Brown, and other characters when he disappears into his doghouse, and retrieves items that should be too large to fit inside it.

Snoopy's Doghouse is regularly depicted as bigger on the inside than the outside, and as stated clearly by one character in an old strip, "The house itself isn't that big, but you should see the recreation room".

So how do you handle that, and moreover, what would the focus of the adventures be?

I thought about creating a game with the premise that the worse you are at things, the more flaws you have, the better you are at achieving the adventure/session goal, or your own personal goal.

By example, let's look a Linus, and Charlie Brown.

Linus is, as Peanuts characters go, a fairly competent character. He is bright, imaginative, spiritually attuned, and often wields his security blanket in such a way as make Indiana Jones envious. Linus suffers from unwanted female attention. His older sister Lucy bullies him a little from time to time, and Charlie Brown's younger sister Sally is infatuated with him.

Linus would therefore be effective during the adventure, but he doesn't really have enough going against him to build up the points necessary to make a major impact on the goal of an adventure, except in a supporting role. This is evidenced in the fact that he can tell Charlie Brown the meaning of Christmas in A Charlie Brown Christmas, but at the end of It's The Great Pumpkin Charlie Brown, there really is no Great Pumpkin.

Meanwhile Charlie Brown, who is a veritable pile of neurosis, is often the hero of the Peanuts stories. He has low self-esteem, lives with numerous fears, and anxieties, he's clumsy, and his own dog is often depicted as way cooler than he is. This means that by the end of a session, he is more likely to have everyone pitch together to fix his Christmas Tree, or his grandmother suggests he bring all his friends over to her house for Thanksgiving.

This is really all very rudimentary I know, but it's all I've managed to put together so far.

I went as Snoopy the first time I went trick or treating. Yes, the very first Halloween costume I ever wore, was Snoopy.

My first dog was a Beagle.

I had a good friend named Charles when I was in grade school, and his next door neighbor had a Beagle named Snoopy. Weird, right?

I once had a Snoopy vinyl figure, about 4 1/2, or 5 inches tall, with poseable arms, and a turnable head. I loved it, and took it everywhere. I eventually lost it somewhere. I was about 5 years old. Still devastated.

My father, for reasons I don't know, thought Woodstock was hilarious .

In addition, my Dad, who was Jewish and celebrated Chanukah, really liked A Charlie Brown Christmas. He never missed it when it was on.

One of my favorite articles of clothing, which finally gave up the ghost a few years ago after nearly 25 years of wear, was a vastly oversized, red t-shirt with quarter lengths sleeves, and a picture of Snoopy on it. He was wearing sunglasses, and a red t-shirt of his own. The word's Joe Cool appeared on his chest. The shirt itself had writing that I think said some like, 'Cool is Hot' or some such silliness. It was sooo comfortable, plus it had Snoopy. How can you beat that? 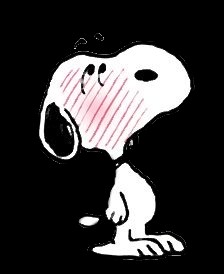 In conclusion, I am looking forward to the new film, and hope to some day put together a Peanuts RPG one-shot. The simple, yet nuanced art, and the slice of life humor of Charles Schultz has been a big creative influence on me during my lifetime.

I hope those of you who are also fans of the Peanuts enjoyed this post, and for those of you less familiar with the franchise, do yourself a favor, and watch the old holiday specials, notably the ones mentioned above. If you have a kid, or you're a kid at heart, consider checking out the upcoming movie. 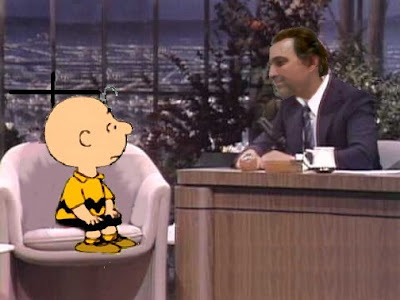 Great job Charlie Brown! Can you, and the Peanuts gang stick around for a while?

Charlie Brown: Gee, I guess so.

Great! There's a lot more to come this month. We have to pause for a break, but we'll be right back after these message...