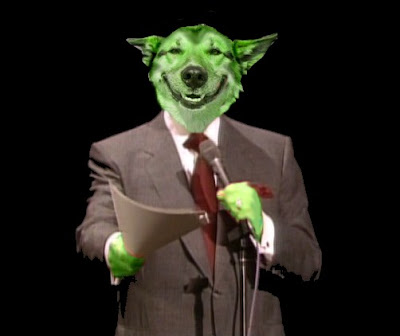 From the broadcasting studio on Level Zeta of our trans-dimensional headquarters,
in association with The Pan-Phasic Communications Network,
comes...
The Barking Alien Blog!

I'm Barkley, and with me as always is an unnamed, sentient saxophone riff from the Andromeda Galaxy, and The Barking Alien Band.

Now, without further adieu, your host and the master of ceremonies for the blog, 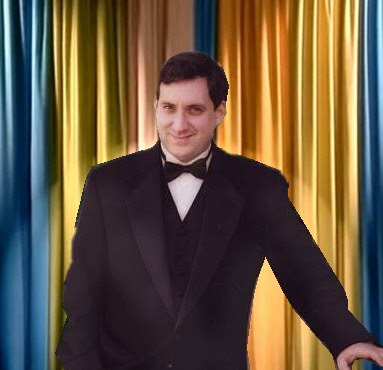 Hiyooo!
Hello everyone! How are we all doing tonight?
I've got to tell you, while I was backstage getting ready, our make-up robot suggested I do a time machine treatment.
A Time Machine treatment?
Yeah. It was great. It took years off.
*RIMSHOT*
So, what's this in the news about a 5th Edition of D&D?
Yes.
A 5th Edition! Maybe they'll get it right this time.
The thing is, do you need five editions? Did the 2nd one break? Can't they just get some tape, or glue or something and fix it?
Ha-ha!

Anyway, this month Barking Alien is going to be largely focused on humor in RPGs, specifically comedic RPGs, humorous ideas for otherwise serious games, and why you would both doing that.

I've mentioned several times in the past that lessons learned from the entertainment industry's great comedians have had a huge impact on the way I Gamemaster.

From timing events, and scenes, to creating the appropriate atmosphere, to getting dialog just right, I harken back to the masters of the craft of comedy. I can honestly say that Gygax, Arneson, and Moldvay had much less of an influence on my time in the hobby than Mel Brooks, the Marx Brothers, and Monty Python did.

Hopefully, before months end, I'll be able to show you all how important comedy, and humor are to gaming, and how enjoyable, and even vital it is to our hobby.

So stay with us, as it looks like we're going to have a great show this month.

Our guests include Jim Henson's Muppets! {APPLAUSE} That's right, they'll be here. Hunter Planet! {APPLAUSE} Looking forward to that. Musical guest Teenagers from Outer Space! {APPLAUSE - Some whooping and hollering} Thought you'd enjoy that. And we've got much more in store for you so stick around!

We'll be back after a few words from our sponsors, and to pause for station identification.