Viewership is back up here on Barking Alien, showing that the old adage is true, 'If you post, they will come.'

Frustratingly vague though it was at times, doing the RPGaDay Challenge this year was fun, and completing it renewed and re-energized my desire to blog, just as I'd hoped it would. Hopefully, I can keep up the momentum going into the fall season, which is one of my favorites (that, and winter).

I have a bunch of mini-themes planned for the next few months. Largely it's just things that have been on my mind, and I needed a way to organize my ideas, while simultaneously motivating myself to post them. I'm not going to be especially strict about each theme, and you'll certainly see posts unrelated to each month's focus.

I thought I would give you some teasers though.

Shhh. The trailers are starting...


September is Funny at Barking Alien

The theme for September is Humor, and Comedy RPGs are going to get some much needed love here at Barking Alien. It's all in honor of the premiere of the first prime-time series in almost twenty years to feature my favorite fuzzy, felt covered stars, 'The Muppets' on ABC, beginning September 22nd!

Psst. Hey Play on Target. September would be a great month to discuss Comedic RPGs, and get a certain guest on the program. Don't believe me? Check out what fans have to say!


October is Spooky at Barking Alien

What better month than October to talk about Ghostbusters, more about my Alien Dread idea, and perhaps finally lock down my original RPG Unfinished Business. Plus, it's an excuse to discuss a little frightening faerie folklore, and perhaps even some Fantasy. 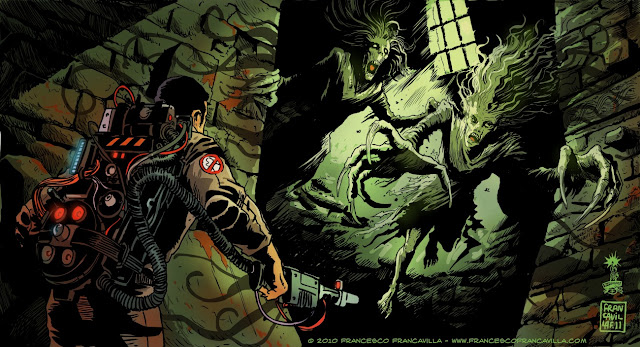 
Barking Alien discussing Fantasy? If that doesn't spook you nothing will.


November is Super at Barking Alien

November is looking like a job for Superhero gaming! A subject near, and dear to my heart that I sadly haven't done a lot lately. At least, not in a big way (which is the way I like doing it).

By the time November rolls around, we'll have seen the new season episodes of Flash, Arrow, the new Supergirl series, Agents of SHIELD, and more. We'll also have all the latest comic book news from New York Comic Con, which occurs in October.


With all that Superhero goodness bouncing around, I'm bound to come up with some new Supers ideas, and insights for running, and playing Superhero RPGs. Be there! Nuff said!


December is Out of this World at Barking Alien

There is a certain little film coming out in December that has peaked my interest. Perhaps you've heard about it...

Yessiree Boba! In honor of Star Wars: Episode 7 - The Force Awakens, I will be posting some ideas, memories, and even art for the Star Wars D6 RPG by West End Games that I speak of so fondly.

December is also the month in which our three year long classic Traveller campaign finally draws to a close. I will be discussing that, as well as more details on my plans for our new Traveller campaign, tentatively scheduled to begin in January.

A Very Merry, Science Fiction, Holiday Season is coming your way this December from Barking Alien.

All this AND Thorough Thursdays is back starting this week!

As always, if there is a question you'd like to ask, a subject you'd like covered, or you simply want to say hi, feel free to comment anytime.

Are the leaves changing color yet? Are they?