In the next few weeks, I will be running a short campaign (likely three sessions, or so) with one of the two groups I regularly game with. For the purposes of this post, we'll call them Dan's Group.*

The campaign in question will be a Marvel Heroic RPG game, set in a Marvel Universe that will very likely resemble Marvel Comics as I would like to see it.

I find myself excited to be running a Superhero RPG campaign for a great bunch of guys, including my friend Dan, who has run some fantastic, free-form Superhero one-shots, and similar short campaigns for the group in the past.

At the same time I am experiencing some concerns, misgivings (if that's the right word), and moments of wrestling with my own ideas. I thought maybe if I vented some of my gaming angst here, you all out there might have some recommendations, and advice. 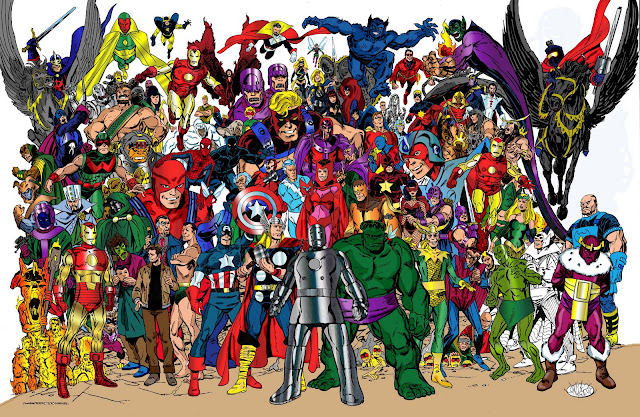 The Avengers, Art by John Byrne
I've been wanting to run a Supers campaign for sometime, and after several failed attempts with my other group, this is a wonderful opportunity to scratch that itch. Except...I don't know if three sessions of Marvel Heroic is going to do that.
Marvel Heroic is a great game, working extremely well for one-shorts, or short series such as this. That's not really what I want to run though. I want to run a long series; a full on campaign as I recently described. For the kind of campaign I want to run, Marvel Heroic isn't as effective as say Champions, Mutants & Masterminds, or something else a bit more detailed.
Then there is the setting. Running the campaign in the Marvel Universe was suggested/requested by one of the players, and most everyone in the group was behind it.
I like Marvel just fine, although it's not my preference. I am more comfortable in the DC Universe, or better yet, in an original universe of our own design.
All in all, I feel like I'm looking a gift horse in the mouth. As if I'm complaining about this chance to do something I love with some really good friends. I just can't seem to shake the feeling that it's not exactly what I want to do, exactly the way I'd like to do, and I fear the end result will suffer as a consequence.
I must ponder on this further.
AD
Barking Alien
﻿


*For the purposes of this post, and one two posts prior, it may be best to identify my two, face-to-face gaming groups in a clearer, and more definitive way then perhaps I have in the past.

Group 1 is 'The Barking Alien Gaming Group', so named because I am the primary GM for this particular configuration of this particular group of my RPG gamer friends.  Our longest ongoing campaign is a classic Traveller campaign that is still active. We ran our 30th session on Saturday, July 18th, 2015. We meet (roughly) monthly.

We have made several attempts to get a second campaign going of something else, but to (frustratingly) no avail.

Group 2 I'll refer to as 'Dan's Group'. While I have run for this group in the past, and will again in the future, my good friend Dan is the primary GM for this particular entourage. We also tend to play at Dan's house.

With that said, this post refers to Dan's Group in regard to a Marvel Heroic mini-campaign.

It is with my Barking Alien Gaming Group that I'd like to create an ongoing, long term Supers campaign.