Are we differentiating between played, as in played as a player, and ran, as in gamemastered? No? Not specifically?

Wait...who am I talking to? This Challenge is a lot of things, but big on specifics it isn't.

OK, I talk GMing all the time. Let's rap about playing.

Going back some years to High School. 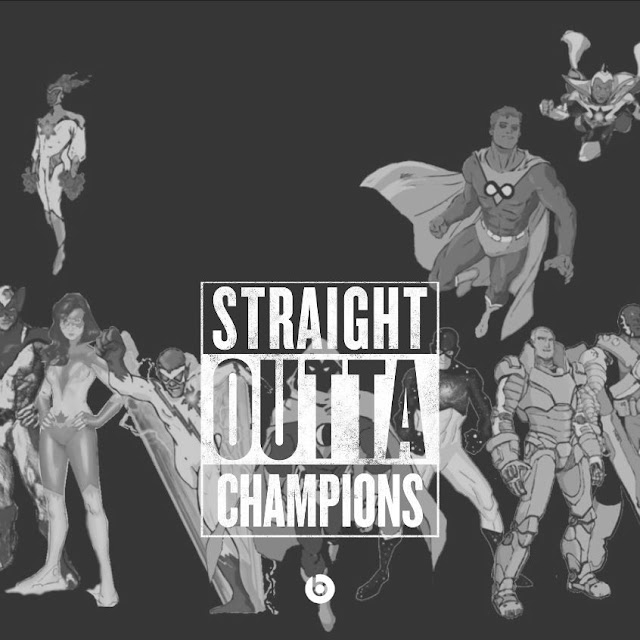 That's right my homies, I went there.

Sometime earlier this week, a friend of mine whom I've known since the 10th grade posted a 'Straight Outta Somewhere' meme image featuring the first edition cover of Champions, the Super Role-Playing Game, with the phrase, 'Straight Outta Champions'. That inspired me to do the image above.
The image that he posted started a whole mess of us commenting, and reminiscing about my friend Will's Champions campaign, which was how the lot of us met. I've mentioned it on this blog numerous times. It was, and remains, the single greatest campaign I was ever a part of.
As a matter of fact, I sometimes hold that campaign up as the pinnacle, the standard if you will, to which I aspire to with my games, regardless of genre, system, or anything else. I want a game as deep as the The Age of Champions game. As beloved as that one. As memorable as that one. As fun as that was fun.

And yes, as long lasting. While I was only part of it for about 3-4 years, the campaign actually began some time around 1982 [I believe], and ended around 1993. I was involved in it from 1986 to 1990.
While I have attempted to give you all glimpses of how amazing a campaign it was, I have barely even scratched the surface. It's not that you had to be there (even though, ya'know, you HAD to be there!), but rather that it's impossible to sum up the entirety of it in a single post, or even two (or twelve - how much time do you have?).
Now let's talk length of the game, since that is what the question is really asking. We're not looking for the best campaign here, or the favorite, but the longest campaign played. Now, I've run some games that lasted a good long time, and my current Traveller campaign has already had 31 sessions under its belt, but without a doubt, The Age of Champions, of which I was a player mind you, was a whole other beast.
So let's do some math (Yuck! Math! Bleh!):
I was only part of the campaign for 3 1/2 to 4 years. During the first 3 years of that time, we only played during the school semester, and only on week days.
So, that means no weekend games, and no games during the Summer.
An average session was 5-6 hours, but we played Monday through Friday. That means, essentially, 5.5 hours a day, 5 days a week, for 9 months. This comes to 990 hours a year, or 180 sessions.
In those first three years we played the game 540 times. That's 540, five and a half hour sessions.
In the last year, I only met with the group on weekends, and then only once a month, maybe twice. It gets hard to figure things out exactly, but let's assume 12 sessions in the fourth year. For ease of calculation, and because some sessions were longer, or shorter than others, we'll stick with the 5.5 hour average session length.
So that's an additional 66 hours.
In total, I played Champions, The Age of Champions campaign, 552 times.
Now, my current campaign has 8 hour sessions on the average. Let's compare - If we divided the total number of hours I played in Will's Champions game by 8, a standard session of my own, current game, that would mean that compared to my 31 episodes, Will's Champions game ran 379.5 episodes.
If the campaign had been run with but one session a month during its entirety, Will's Champions game would has lasted for over 31 years. Is that right? Three hundred, and eighty monthly sessions would last 31 years?
Daaaamn. 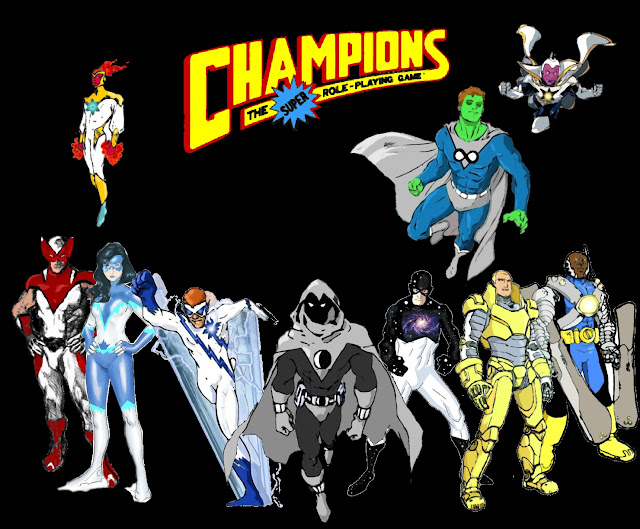 
Loved that game. I miss those guys, and I miss Champions.