The longest session I've ever run is well documented (at least by me).

The longest session I've ever play is...a story I don't think I've every told. I can't say I've even thought about it in forever.


If memory serves, the longest game session I ever played was a game of Advanced Dungeons & Dragons 1st Edition. I have to assume it was during the Summer of 1982, but it may have been 83'. It was before I became the primary Gamemaster for this particular group of friends (and honestly, for most of the gamers I knew. This was when I still played, and liked playing).

I spend many Summers between 77', and 85' going to 'day camp'. It was a lot of fun, I made a lot of great friends, discovered girls were cool for the first time, and played a crap load of RPGs (after first finding someone else who knew about them in 78').

The older kids division of the camp got to do 'sleep away' trips for 3-5 days, twice each Summer. In 1982 (or 83'), at the age of 13 (or 14), I qualified, and got to go to this place that I remember had an awesome lake you could swim in, or fish in if you went to the far end. It had a shooting range (rifle only - I kid you not), classes on camping, survival of a 'boy scouts' nature, and hiking up a near by mountain.

The campers only camped outside over night for one night. The rest of the time, each group (usually consisting of 6 kids) had their own cabin. The boys had their own row of cabins, and the girls had theirs. No co-ed cabins, which is just as well. At 13 I think I may heart would've exploded if I had gotten to sleep in the same quarters as my crush at the time.

Anyway, my camp group, and my gaming group, were the exact same cadre of people.

The night before the last day of the trip, none of us could sleep. In addition to discussing subjects of great geek importance (Star Trek, Star Wars, Comic Books, etc.), we were trying to figure out who liked who, and who said what to who about whom.

The Camp Counselor assigned to our group came into the cabin at least twice with lights out warnings. If we didn't go to sleep, he would have to make sure we were last at the breakfast line, or the last to swim in the lake the last day.

We were torn between thinking he was a jerk, understanding that we were probably keeping the cabin next door awake, and eager to ask him what he knew about women. After all, he was dating one of the female counselors (and the coolest one to boot).

We apologized, promised to go to bed, and even turned off the lights (thank goodness we had flashlights to see - Heheh). It was no use though. One person whispered in the dark, another responded, I murmured my opinion after across the cabin, and the next thing you know, we're all up again.

The third time he came in we figured we were done for. Frustrated with us, and perhaps a bit desperate, he said, "Look, how about I run you guys through a D&D adventure? The only requirement is that you all stay in bed."

My friend Martin said, in a stunned tone. "You're going to game us to sleep?!"
"Basically", the counselor said. "We game until we pass out".
It was a deal, but poor bastard, he had the harder part of the bargain. Unknown to him, there was a ringer in the group. Me. Even at 13 I had insomnia.
We ended up staying up an additional 7, or 8 hours. Well, not all of us. Martin fell asleep first, and 'Lefty' went down next, mere minutes apart. Ben's character was killed, and so although he could stay up a few more hours, he decided to call it a night. David went to sleep at some point not long after that. Richard drifted in, and out. He would fall asleep, then wake up because of the Counselor and I talking, listen in for a while before going back to sleep once more.
The Counselor, and I stayed up the whole time. No sleep at all. We went from 'rise and shine', to 'day full of activities', to 'camp curfew', to 'rise, and shine'. While a 7, or 8 hour session is nothing special, I feel like it is if you started at 10:30, or 11 pm, and hadn't slept since the night before.

This tale ends with a twist. The adventure he ran us through?

The Ghost Tower of Inverness. 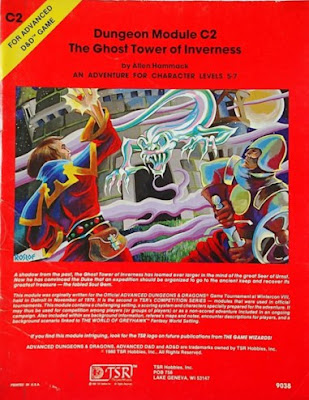 Now what are the odds that one of my favorite blogs would be talking about just that very module this very same month? Seems pretty unlikely right?  ^ _ ^

Now I don't remember the tower being anything like Zak describes, but there are some very logical reasons for that.


Early versions of the module had hidden within the Tower an intelligent magic sword, the name of which I can not recall. I do remember David's character obtaining it before he fell asleep.

So perhaps my longest session played was not played that long, but the memory has lasted for years.

Posted by Adam Dickstein at 9:27 AM