Looks like I'm finally caught up. I guess you could say I arrived in the nick of time, too. After all...

Superheroes comes in a close second after Science Fiction in the list of genres I love, and love to game. I think I may be coming close to playing Supers more than I've played another other genre as a player. That suits me just fine.
I feel like I've played, and/or run nearly every Superhero RPG that has ever been on the market. I've spent some real quality time with Aberrant, DC Heroes, Golden Heroes/Squadron UK, Heroes Unlimited,  Kapow!, Marvel Heroic, Marvel Super Heroes, Mutants and Masterminds, and Villains & Vigilantes.
I've also gotten familiar with BASH!, Capes, Deeds Not Words, Godlike, GURPS Supers, ICONS, Silver Age Sentinels, Superworld, Underground, and many, many more.
For a long time now it seems like Barking Alien might as well be called Barking Super, or Crimefighting Alien with how often I discuss Supers gaming.
Choosing a favorite though, wow, that's gonna be tough...NOT! As if! 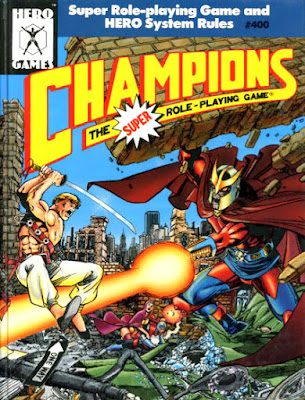 As related to you all only a few posts ago, Champions is my favorite Superheroes RPG, and has been ever since playing in my friend William's Age of Champions campaign in high school.
Far more complex a system than I prefer, I nonetheless love it. Nearly all the complexity is front loaded, and once play starts, the game moves remarkably smoothly, and surprising quick.
I've heard from many others that Champions combat can be slow, especially with larger groups, but I've not really ever experienced that. Granted, no one I've played with used a hex grid map, and I certainly never did, and that could be the reason, but I think a lot of people are drawn to Champions for reasons that differ from mine.
Champions, and games like it, seem to attract rules mechanics, rules lawyers, power gamers, and min-maxers, who derive enjoyment from beating, or breaking the game. If they have a game with considerable complexity, why not push that complexity, and try to get the most out of a set of rules obviously made for people like them?
Well, if that's what floats your boat, more power to you (and I'm sure you'll figure out a way to get the most power possible). That just isn't my jam daddy-o. No, I like that the mechanics of this game are solid, dependable, and supportive of the way I want to play. I want to create the characters I see in my mind. I want the games mechanics to give those designs distinct, and specific abilities, advantages, disadvantages, and story elements. Then, I want to use those characters to weave a story set in a comic book, Superhero universe of my own creation.
For me, no game does that like Champions.
AD
Barking Alien
Some sad superhero news chums...
Yvonne Craig, the actress best known for playing Barbara Gordon, aka Batgirl, on the 1966-1968 Batman TV Series (although she was only in the third season), has passed away at the age of 78. Ms. Craig was well know to fandom, appearing in a number of other 60's television shows, including Star Trek, where she played the Orion criminal Marta in "Whom Gods Destroy".
Rest in peace lovely lady.
﻿
Posted by Adam Dickstein at 11:51 AM