I Know Your Eyes

I Have Lived Long Enough to See The Same Eyes in Different People.

By 'Lived' I mean GMed. By 'Different People' I mean Player Characters. 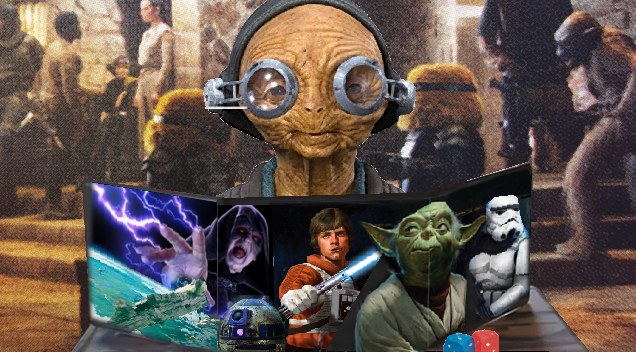 Maz Kanata runs a mean game of Star Wars I tell you.

A friend of mine noted just the other day that, "Star Wars characters are kind of same-y".

To which my brain instantly countered, 'As opposed to D&D characters? Let me guess, is that Elf over there aloof, and kind of snobbish? Is the Dwarf dour, and itching for a fight?' Raise your hand if you're a Rogue, or better yet an Assassin, with a dark secret from your past. C'mon, you can tell us. We're all friends here. Yeah, that's what I thought.

Characters that fit well into a given milieu often start out a tad cliché. They begin adhering fairly tightly to tropes that easily connect, and identify them with the universe, or genre they're in. I can practically feel the sneering faces of the artistes in the audience. Well, I'm here to tell you all to relax. It's OK. It's cool. In fact, it's even a good idea.

From personal experience many times over I can tell you there is nothing more annoying than a PC who doesn't fit the setting. An Iron Age anti-hero in a small group of Silver Agers is terribly jarring. Likewise I tend to generate a fair amount of ire when playing Pathfinder, as I try to use cunning, creativity, and reason instead of MMO skill tree character optimization to overcome opponents. That's just not what the game is about for most people.

The critical point I want to make here is go ahead, be cliché. Be full of tropes. Play a Human Smuggler with a big alien sidekick/companion. Owe money, or cargo to an alien crime lord? Great! How about a young woman, or young man from a backwater planet who dreams of the stars? Sure, why not. You want to be a Bounty Hunter with tricked out armor? Awesome. More power to you.

There was a very good reason the West End Games' Star Wars RPG had those types of characters as templates. They are easy to identify with, easy to see with the mind's eye. It allows a player familiar with the setting to find what they're looking for right away, and gives the unsure player a place to start.

It is really after character creation that PCs start to be differentiated from each other in these kinds of games. Just as some disparaged The Force Awakens for being too much like A New Hope, I embraced the sameness, but got really charged up over the differences. One of my favorite characters is Finn. (SPOILERS! I guess) He is a character type we've seen in comics, and other places, but never in a big screen Star Wars movie. We always wondered if a Stormtrooper could, or would defect, but here is one who does! Then, as the story goes on, we learn little snippets of what he's like, what First Order Stormtroopers are about, and what is it that makes this guy special, unique, and a hero. 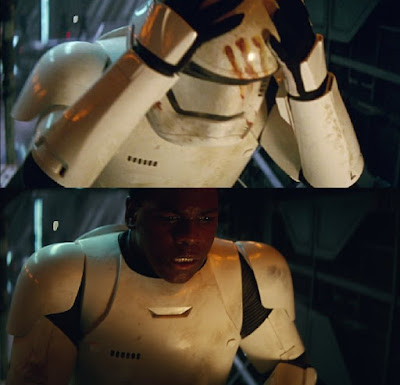 Generating a character for Star Wars Traveller, like original Traveller, is kind of a mini-game in itself. I want to keep the concept of rolling to generate a character, with the trials, and tribulations that might come with not getting exactly what you want, then having to figure out what to do next.

For those less familiar, or even unfamiliar with classic Traveller, a player rolls on Career tables in a attempt to qualify his, or her PC for a given Career, advancement in that Career such as a Promotion, or Commendation, if they received a Special Duty/Assignment, and yes, whether, or not they survived their entire Term.

Ah Traveller. The RPG where you can die during Character Creation. Ludicrous, and Awesome in equal portions.

I've come to love this particular element of the game, though perhaps not for reasons Marc Miller intended. You see, in my campaigns when someone dies during character creation by failing their Survival roll (to survive their term of service), I ask them if their PC 'Really died', or 'May have lived'.

Some players opt to actually have the character die, especially if it wasn't coming out as they'd hoped, had really poor stats, or whathaveyou. On the other hand, if they really liked the character up to that point, they can roll on alternative 'Non-Death' or 'False Death' tables (I've changed the name over the years back, and forth between the two). These tables provide interesting backstory material, and occasionally special gear, or abilities. However, they also come with a catch such as a dramatic/tragic event, an enemy, and/or a handicap/disadvantage.

For Star Wars Traveller, I definitely want those story, and character elements. As noted above, I think it is really cool to play a Wookiee Co-pilot/Mechanic, a Starfighter Pilot, or a renegade Princess. The kind of tables I'm talking about can add some extra grit, and texture to those staple character types, making them the same, but different.

I don't believe the roll that gets you a cool background should have to allude to death necessarily. Instead, I am getting rid of the Survival roll, and implementing an 'Event' roll. If you fail your Event roll, a major event cut your character generation process short, but in exchange gives your PC a richer history, a deeper connection to the campaign, and maybe a nifty gadget, or power.

A quick summary of Star Wars Traveller Character Generation would go as follows:


Your initial Career entry is free. You do not have to roll to Enlist as you do in classic Traveller. There is no Enlistment roll in Star Wars Traveller, so your first Career of choice is automatic. However, you do need to roll to Re-enlist.
There is no need for a Survival roll either. You are assumed to live through your career. However, you do make an Event roll. If you make your Event roll, nothing special happened and you may continue on with Character Generation. If you fail at your Event roll, your character was part of a life changing incident. You must stop character creation at that point. See GM for additional details (Event tables will be consulted).
You can get a Promotion, and a Commendation in some Careers. See individual Career tables. (I'll address these in an upcoming post).

Careers that do not have Promotions, and Commendations may also roll for a Contact, or a Knowledge each Term, but not both. Pick one, or the other each Term.

Contacts are acquaintances your PC may call on from time to time for information, assistance, etc.. See the Contact table to randomly roll a Contact. You may also, with the GM’s permission, keep a Contact ‘unconfirmed’ until it is needed. Once it is identified and ‘confirmed’ you may not change it.


A Smuggler PC has three Contacts, one of which is unconfirmed. The Contact has not been identified. While being chased by Imperial Forces through an asteroid field, the Smuggler tells the GM he has an old friend in a nearby star system that might be able to lend the PC team a hand. The third Contact is now confirmed as a gas mining station administrator who was once a gambling buddy of the PC Smuggler.
Knowledge is something that character knows that is unusual. It might be that she understands Droidspeak, or Wookiee. It could be familiarity with a single, rarely visited star system, or a particular space phenomenon. It should be one thing, somewhat specific, and not easily attained using a common skill.
Re-enlistment is handled normally. If you fail to Re-enlist you may choose another career.

No PC may have more than two careers.

Well, that is all for now. There is a lot more on the horizon so sit back, relax, and stay tuned.