I Will Finish What You Started

Star Wars Traveller ain't over yet...

My original plan was to spend the month of January dedicating my blog entirely to this project, and in that regard I feel that I accomplished my goals. I'm pretty happy about how the posts turned out. I've received a nice bunch of comments, and more hits then the previous two months combined!

I had also really hoped I'd be able to cover all the subjects I wanted to, and put this baby to bed by month's end. That I was not able to do. Real life, some personal stuff, and spending too much time thinking about the game, and not enough posting about it means I still have a good bit of work left to do.

I have a lot more entries planned, and a lot more material to cover, but a new month dawns and there are other subjects I want to talk about in addition to my Star Wars Traveller project.

Expect this month to be an odd mix, as that is what February always is for me. A wave of nostalgia, a bit of frustration, and the random resurgence of a few areas of interest I hadn't addressed in a while are going to make for (hopefully) some really interesting entries in the coming month.

Star Wars Traveller will continue, popping up out of Hyperspace when you least expect it.

Now I've started a lot of projects over the years, and either let them drop, or simply forgot about them. This is different. Like The Muppets RPG, this one is something special. It speaks to me. I not only want to finish this, I don't want to every be truly finished with it. It's a work in progress that I want to see progress further and further, getting better and better.

As a token of my promise to keep at this, here's a little present from me to you for stopping by, and supporting my fanboy folly... 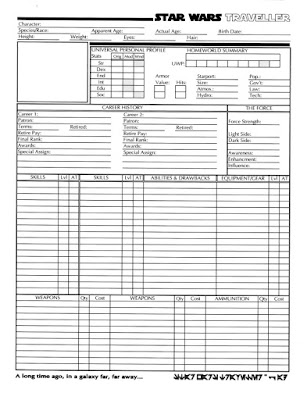 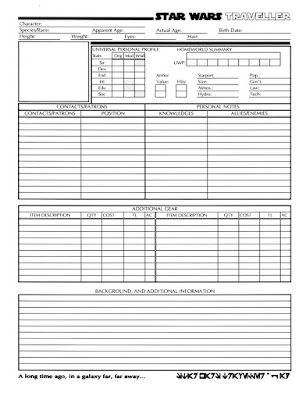 Until next time, Goodnight from Jakku... 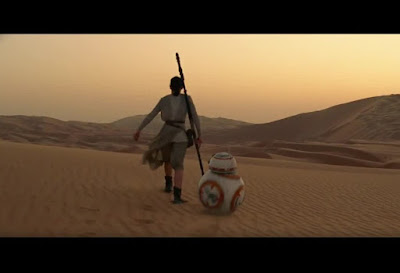