The Force, It's Calling To You. Just Let It In

Finally we return to discussion of The Force.

Here, in this post, I hope to explain the ways, and means of using Force Abilities in Star Wars Traveller such that they will be available, and usable to both my players, and anyone reading this who may want to adapt Star Wars Traveller for use at their own table.

One of my great, personal pet peeves is over-explanation, especially of things best left unexplained.

It is my opinion that nothing hurt the Star Wars franchise more than Midi-chlorians. Not a kid Darth Vader, not Jar Jar Binks, not even the terrible, chemistry-less 'romance' of Anakin, and Padme on Naboo (and that crap was BAD!).

Midi-chlorians ruined Star Wars. Once the mystical philosophy of The Force becomes bacteria you not only kill the magic of it, but you open it up to a hundred questions that further stomp on what makes it special.  Midi-chlorians represent Star Wars deconstructed, and you should never deconstruct Star Wars.

I prefer to treat The Force the way I treat Magic in the style of Fantasy I most prefer. It is an inexact, unclear, though thoroughly true and evident thing that gifted, and dedicated individuals spend their lives trying to understand. The exact nature of The Force, the greater truth behind it, is unfathomable, and unknowable.

When looking at rules governing that which is not exactly governed by rules (or at least rules we know), one must allow for a certain amount of vagueness.

I have personally made an art out of being vague as to the nature of things in my campaign settings, even when an answer may exist. The trick of it is, perhaps there is an answer, but you just don't know it yet. Perhaps there simply isn't one. You the player, as well as your PC, may never know.

So I warn you in advance that some of this may seem incomplete, vague, and/or flexible to the point of fudge-y, or 'GM fiat' oriented. I will try to make it as concise, and functional for others as I can. 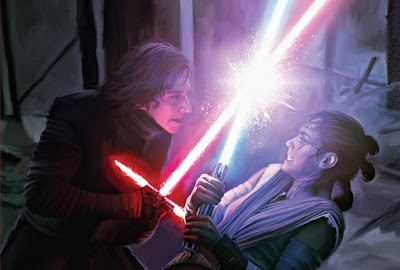 Kylo Ren versus Rey
By Brian Rood
Special Thanks to jtbeltman for identifying the image.


We now know how skills work, and as such, how one can learn Force Abilities/Skills. Essentially, if your character is Force Sensitive, you can attempt to use the Force. Without any training from a Jedi (or Sith) with Force Skills of their own, and the Skill Instruction, you may only gain an Active Training point (AT), or Passive Training point (PT) to one of the Force related Skills after an attempt if the Gamemaster feels it is appropriate. You may use, or apply Force Strength to the attempt however.

Force Strength is a measure of how much of the Force you are connected with, how much of it you can direct, and how much flows through you. Each time a PC uses a Force Skill, they spend a single point of Force Strength. They may spent more than one, with each additional point either increasing the effect, decreasing the difficulty, or countering the ability of another Force user (explained in more detail below). You can not apply it directly to the Skill roll however.

A few things occurred to me while putting this together.

When someone is especially Force Sensitive, other characters in the franchise describe them as 'Strong with The Force', or remark that 'The Force is Strong with this one'. This tells me Force users have Force Strength as a measure of their personal power.

The Force Awakens does something both unique, and cool with the use of The Force. It shows individuals with lots of raw power, but little technique (Kylo Ren), and a good bit of power and some natural talent (Rey). This drove me to have Force Strength, and Force Skills.

To determine if your character is Force Sensitive...actually...we'll get back to that. Let's assume yours is.

To determine your PC's Force Strength, add together your character's Intelligence, Endurance, and Social.

Social is used a bit differently in my house-ruled version of Traveller, so though it may seem strange to include it, it actually fits for our purposes. In my Traveller games, Social isn't just, or only, Social Standing, but a bit like Charisma. It represents your social presence, and force of personality.

OK, so now on to the Force Skills:

There are three Force Skills - Awareness, Enhancement, and Influence.

Awareness is a character's ability to sense The Force, as well as their power of perception of things in the universe through The Force. It is a representation of their Force senses. Awareness also governs knowledge, and understanding of one's own self.

With Force Awareness one can:

"I sense a disturbance in The Force", is an act of Awareness.


Enhancement governs the ability to enhance, or improve that which already exists, and functions within The Force, beings connected to The Force, or one's self.

With Enhancement one can:


If the PC begins his, or her action with, "I improve my", "I increase my", "I slow my breathing in order to", or "I give my friend the strength to", then they are using Enhancement. Enhancement is the only Force Skill that can kind of improve your normal skills, though really it does this by temporarily raising a Stat, or lowering the difficulty of an action.

Luke Skywalker's one-in-a-million Proton Torpedo shot into the Exhaust Port of the first Death Star was an act of Enhancement.


Influence is the Force users skill at bending The Force to his, or her will, and using The Force to effect the universe in an unnatural way. By unnatural I mean that the laws of physics as they are understood by those that dwell in the Star Wars universe can be defied, and overcome.

This is often believed to be the most powerful of the Force Skills, and perhaps that is true to some extent, but only in the most obvious, physical, and crude manner. It is the Force Skill most likely to lead one to the Dark Side as a result. A Force user must ever be wary of using Influence, as it can make one believe they have mastery over The Force, but forget they are also a servant of it.

With Influence one can:

"These aren't the Droids you're looking for", is an action of Influence.


More to come - Next up: An example of Force use, how Force Strength applies,  The Light Side, and The Dark Side, and being Force Sensitive.

Wow. This was a long one.

I need some coffee with blue milk.