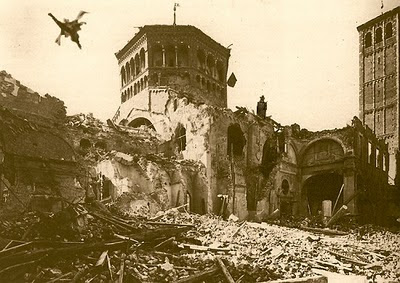 I've finally finalized my final decision for the New Jersey Group's new ongoing campaign. Finally.
A very special thanks and a hardy I-couldn't-have-done-it-with-out-you goes out to Erin Palette of Lurking Rhythmically who figured out what I was looking for when I wasn't so sure myself.
Mr. and Mrs. America and all the Ships at Sea...NewFlash...This just in from the Empire State of New York and the Garden State of New Jersey...Introducing...
GODS IN LONG UNDERWEAR: THE BIG ONE
A gritty Golden Age campaign set right smack in the middle of World War II. Think the Golden Age comics of the 1940's meets Saving Private Ryan, The Guns of Navarone and A Bridge Too Far.

Largely its comic book style characters placed in a real world war setting. Bullets may bounce off one or two people but they still hurt and they still kill the guy next to you. If you can throw a car the Ratzi's are going to be aiming for you before the lady who leaps around with a trick staff. I've already mentioned it to the group and they are all over it.

I've always included a healthy dose of Golden Age comics in my Superhero campaigns and used the period to create a history and mythology for my modern caped and cowled universes. I've never actually run a Golden Age game however. I'm really excited to finally be doing so.

At least two characters have already been pitched. I won't reveal them yet as I'm looking to get more info on one and a few ideas from the ladies in the group. Suffice to say they fit the setting though they are very different from each other. One would appear to get along perfectly in a brilliantly four color comic book setting, though there are twists and obstacles to the character giving it a deeper nature. The second character is much more Pulp, akin to a Doc Savage feel. Its going to be very interesting seeing these guys interact, especially since they do have some common elements between them.

Things I Need to Keep in Mind:
This is not my usual comic book style game. PCs can kill the villains. Villains are out to kill the PCs.

War is Hell. Superheroes are fun. How do you make Hell fun?

Genre tropes and conventions need to be more flexible. Realism edges out comics this time.

So many ideas and so much more to think about. Really wish I wasn't completely exhausted from work and my utter lack of sleep.

More to come as always.

Good night America and have a pleasant tomorrow,

Posted by Adam Dickstein at 9:13 AM