For the final chapter of our President's Day D&D adventure, my friend Shawn took over and immediately focused on the task at hand. He got himself organized, looked over the rulebook as a refresher, and even set it up in front of him like a screen.
Shawn is a bit more old school then the rest of us. 'D' and I teased him about it a bit, asking if he was comfortable and telling him it was going to be OK as we set him up with both a dungeon and a dragon. "Wouldn't want you to stray too far from your comfort zone", we snarked.
Shawn took it well and retorted that up until now we'd had it easy. Now a real man was in the driver's seat. We all laughed. Good times.
Anyway, for the most part Shawn delivered a pretty standard dungeon crawl with a few twists. As standard dungeon crawls go this one was damn good and that's coming from the guy who doesn't like standard dungeon crawls all that much. For one thing, getting into the dungeon required us to overcome this puzzle/riddle trap that either hurt you but good or let you in the dungeon. Shawn used some of the sinister sounding sing-song dialog of my Sod Dobbies as clues to answer the riddle and figure out how to get in. Thank goodness he and Wendy took notes. Ten minutes after delivering the dialog you couldn't pay me to remember what I'd said. I ad lib well but have to make a concentrated effort to track what I'm saying or I have trouble recalling it later.
Once inside we faced a series of traps, a group of orc like creatures and eventually more flaming zombies. The orc things were not orcs, I'm sure of that, but I'm not sure what they were. The creatures we encountered were Human sized but stooped over a bit, pale grey, hairless and afraid of bright light (like torches or a light spell). They were quite adept in the dark however. Anyone recognize this particular humanoid? They were nasty and we got hurt pretty bad. We ended up blowing our healing potions (we had two amongst the whole party) so as not to face the big baddy low on hit points.
Finally, we confronted the dragon/drake/demon creature in this room that I'm going to have difficulty describing. It was like a round peg had been slammed through the bottom of a square hole. You entered a large square shaped room and in the middle was a round pit that took up about 75-80% of the surface of the floor. The drop was about 15 ft. and was littered with treasure and bones. The dragon creature was down there performing some ritual, complete with a magic circle of sorts carved into the bottom of the pit. 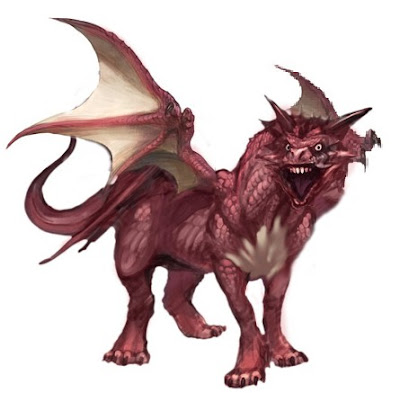 As the Paladin and I engaged the creature with the Ranger providing back up, the thief and the 'Holy Mage' tried to undo the circle and figure out what was going on. Unfortunately the beast was tough as nails and dished out a world of kick ass on the Pally and yours truly. At one point it even caught on to what the others were doing and nearly killed the Magic-User/Cleric (down to one hit point in a single attack!).

We discovered between bouts of getting our butts handed to us and a few lucky shots that the dragon creature was, in fact, THE BARON! He was transformed into this creature when his castle was decimated centries ago. It is the form of a demon who he made a deal with to obtain the Sceptre in the first place. He is cursed to remain in this form forever unless he can perform a magic ritual that sends the Sceptre back to the Abyss. My character actually offered to help him thinking it would get him back to normal and that dangerous magic item would be gone but the others thought it best to destroy the item. To that end, the Paladin rushes over to the Ranger and comes up with a plan. The Holy Mage will bless one of the Ranger's magic arrows, the Paladin will hold the creature or otherwise render it immobile and the Ranger will attack the Sceptre! The Thief had slipped into the shadows at this point and came up behind the creature intending to back stab it. It almost noticed her until I used an illusion spell to draw its attention toward me (really good bad move on my part I thought).

What followed was pretty sweet. The Paladin got in close and grappled Baron DracoDemon while the Thief backstabbed from behind with...a Natural 20! Super-duper double dipper damage on the backstab. Arrow away and a spell from the Holy Mage and the Sceptre was a thing of the past. It broke, releasing and then sucking back into itself a deluge of violet flame and electricity until finally exploding into a million pieces. What remained behind was the Baron's original human body, now hundreds of years old, which proceeded to crumble into dust.

In conclusion, no one died (though the Holy Mage and I can close a few times), the monster and the item were destroyed and peace one again reigned over the land.

A good time was had by all and I really hope these guys and I get a chance to run something together again sometime soon. I rather liked the round robin GMing within one game idea. It suits a one shot best but its a cool idea not matter how you slice it.

Questions and Comments Away!