You're Offering Me A Job?

Careers for Star Wars Traveller are relatively the same as they are for standard, classic Traveller as noted in my previous post. Okay, actually they're the same as MegaTraveller, since that's the assortment of core Careers my group, and I use. Practically all of the Careers in Traveller are valid, fitting quite easily into the Star Wars universe, so no adjustments are needed for most of them.

The following MegaTraveller Careers transfer over to Star Wars Traveller as is:

Rather then make unnecessary changes to these Careers mechanically, or even aesthetically, it is how you represent them in the setting that matters.

In other words, if you make a character with two Terms of Army, and one of Scout that could mean she is a Resistance Commando, a First Order Scout Trooper, or an independent mercenary type.

Barbarian is fun in the Star Wars universe, as it can easily be used to present any being from a primitive culture, or simply from a backwater planet like Tatooine, or perhaps Jakku. I guess I could have changed the name to Tough Native (which is what it is called in Star Wars D6), but that seems a superfluous choice.

These next ones will have a name change:


The main reason for these is atmosphere, and feel of the milieu, but also because of what the Careers do, and who the people are who do these things in the Star Wars universe.

I know a number of people over the years who chose Flyer as a Career when what they really wanted was a Wedge Antilles, or Poe Dameron type Starfighter Pilot. Unfortunately, Flyer doesn't necessarily create great pilots, and rarely space capable ones. Flyer is a Career aimed at aircraft, not spacecraft, and more often than not hands the PC options for operating a variety of other vehicles. This is better suited for a Operator, who might 'operate' an AT-AT Walker, a Sail Barge, or fly a Snowspeeder across the icy plains of Hoth.

Now, there are also a small batch of new Careers I'll be adding to the mix. If you take a close look at the core list above, you'll notice some Careers missing.

Merchant is removed in favor of Smuggler, which is a better fit, and probably what most of us thought we were playing when we chose Merchant in the first place. Belter is removed (for now), and the Vargr (Wolf/Dog alien species in Traveller) Career of Scavenger (originally listed in the Vargr supplement) is now a mainstay. Not only is this a good fit for a character like Rey, but it also covers scavenging, and prospecting characters such as Tatooine's Jawas.

Technician is a funny one. Most Science Fiction/Space Opera games have some sort of Engineer, or Mechanic profession since, hey, there is advanced machinery EVERYWHERE! Somehow Traveller missed this very obvious fact, and classic versions of the game do not include a dedicated tech Career. I decided to include it in Star Wars Traveller because although at first glance none of the main characters are engineers per se, many of them could be considered to have Technician as one of their two careers. Chewbacca definitely qualifies as a Technician, with perhaps a term, or two of Smuggler thrown in. Rey could easily be defined as a Scavenger/Technician.

Then there are the truly dedicated Technicians, R2-D2, BB-8, and other Astromech Droids. I've had people play droids in my Star Wars D6 games over the years, and I want the opportunity to be available here (especially since I am totally in love with BB-8. OMG it's so ADORABLE! Ahem). Of course, this brings up a whole other issue of droid Player Characters...but we'll get to that much later in the month. 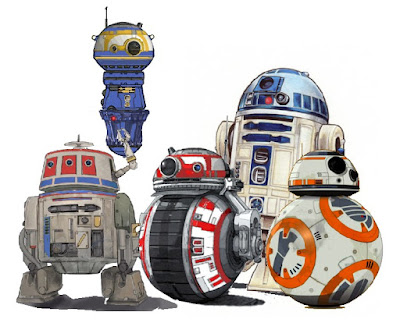 Astromechs
Don't leave your home base without them.

For now, I think we have the basics. I just need to give you all the tables for the new Careers, the Event table ideas, the new Mustering Out benefits, how The Force works...

Wow. There is more to this than I thought. Oh well. Let's get to work...