As I think about today, and how amazing it is that I've been doing what I love [running and playing tabletop RPGs] in one form, or another for 40 years now, I find it curious how much of my current gaming revolves around Superheroes.

It was Superheroes comic books that got me started in the hobby after all.

Unlike a lot of people who came to RPGs from other games (particularly war games, and/or miniatures), or a love of fantasy literature, I came to it by way of wanting to create, and participate in stories of a heroic nature.

The kid who taught me to play on that fateful day in Brooklyn, August 25th, 1977, was a year younger than I was, and learned to play the game from his older brother. He explained it to me by saying, "It's like playing out a comic book. You create a character, go on adventures, defeat villains, and save people."

For this reason as much as any other, I've rarely encountered the 'murderhobo' mentality in earnest. My fellow players, and I as GM, were simply never all that interested in the idea. Once in a blue moon perhaps, as a change of pace, we'd play people just trying to survive and make a name for themselves. Most of the time though, it was about bigger pictures, deep goals, righting wrongs, fighting for a better world, a better tomorrow.

The games that drew my attention, and won my favor were games in which you played heroes, fighting the forces of evil, toppling tyranny, and discovering the wonder of the universe. Games like Star Trek, Star Wars, and of course, various Superhero RPGs.

These days I don't get to run, or play Star Trek, or Star Wars as much as I'd like (though I do get the chance once in a while. More about that another time). I do get in A LOT of Supers however.

Why, just next week I will running a DC universe adventure as part of my Google Hangout groups Ultra Mega Summer Super Crossover Event! 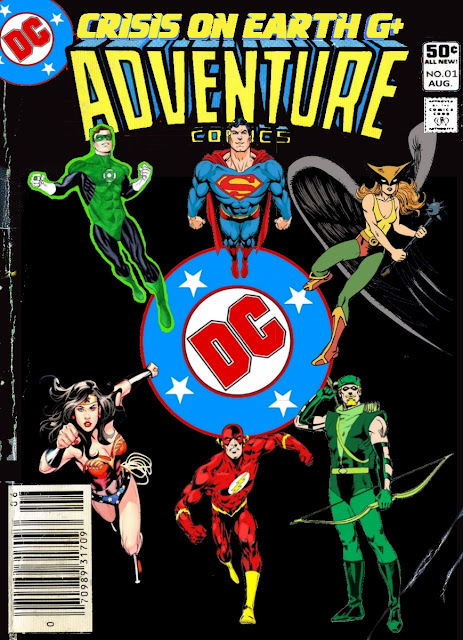 I found this in the Dollar Bin of a Comic Book Store on a Parallel Earth.
It's in pretty good condition. What a bargain!


In addition to my ongoing My Hero Academia: American Ultra campaign, I am taking over the reins of our little online group for a few sessions (Muhuwahahahaha!) in order to run something very near, and dear to my heart - a Silver/Bronze Age DC Comics mini-campaign!

Most of my friends were Marvel fans when we were growing up. For a while, I would've said I was too if asked. DC wasn't as cool as Marvel you see, especially when you're between 8-14 years old, and living in the 1970s and 1980s.

At the same time, if asked who my favorite superhero was, I would usually say Green Lantern. My favorite team? The Legion of Superheroes, and the Teen Titans. (But, you know, I'm still really a Marvel fan. Shyeah. Right.).

Eventually I grew to be proud of my love of the bigger, bolder, more mythic comic book company, and it's larger than larger-than-life heroes, and villains. Of course, I came to terms with this just as DC's management decided to blow it all up, and start fresh in the landmark Crisis on Infinite Earths maxi-series.

I now yearn for a simpler, yet more epic time. A time of four color heroes, threats to the world, and even the universe, Gold Kryptonite, Super-Pets, and Bat-submarines. I want to visit the Wild West of Jonah Hex, Batlash, and Cinnamon, and the ruined, mutant future of Kamandi, The Last Boy on Earth.

This campaign is therefore a celebration of DC Comics before 1984 - Before waves of anti-matter, and muted, red skies took away the true Earth-2, Earth-3, the original Superboy, and The Batman of Zur-En-Arrh. It is the era of The Creeper, Ragman, Supergirl dating Brainiac 5 in the 30th Century, and a host of awesome forgotten villains, and heroes deemed 'not edgy', or 'extreme' enough to survive unmolested into later eras.

The Teen Titans Judas Contract, the Legion of Superheroes' Great Darkness Saga - these stories are worth a thousand times what modern DC is doing.

Hold on to the Mobius Chair, unfold the Worlogog, and follow us on a journey through the space-time continuum to save an entire reality, or maybe two, in the...