As my 40th Gaming Anniversary month draws to close, I am kind of amazed at how much of it I spent talking about, and playing Superhero RPGs.

It shouldn't come as a surprise really, for as I've said, Supers is what got me into RPGs in the first place (in a manner of speaking). It's just that, with a name like 'Barking Alien' you'd think there would be a bit more Science Fiction in my celebration of the 40 year mark.

Furthermore, when I look at the general gaming landscape, how things like Dungeons & Dragons, Pathfinder, and Numenera seem to dominate the market by leaps and bounds, I am once more reminded that is the bulk of the lot, the unifying factor, the common denominator...but it just ain't me.

This past Wednesday evening I ran the first session of my half of our Google Hangouts group's Ultra Mega Summer Super Crossover Event, DC Adventures - Crisis on Earth G+!

The first part, a Marvel Heroic mini-series, ended with a bit less bang, and a bit more whimper than we all would have liked. The Marvel Heroic system didn't turn out to be to most of the players' liking. Even, or perhaps especially the GM found the game cumbersome, and tedious, getting in the way of telling a Superhero comic book story instead of supporting, and enhancing it.

I was personally a tad disappointed that we didn't get to 'see', or experience very much of the Marvel Universe. If I don't normally play in the Marvel milieu, and I get to for a limited run, I want the opportunity to encounter uniquely Marvel things. I wanted to feel why the atmosphere of Marvel is special - why it's not DC, or our homegrown Kapow! game.

I tried really hard to make that a part of our DC excursion. To facilitate that, I made some tough choices. Not tough for me to make, but choices that I knew might not initially sit well with all the players. For example, I limited which characters they could choose to play, but I didn't do it arbitrarily. Rather, I did it to make the whole thing work.

Here's what we ended up with...

The Silver/Bronze Age Justice League of America
Characters by Jose Garcia Lopez
Background by Me.

First, I told all the players that the story was set in the DC Universe in the year 1984.

I opened the game saying:


"The year is 1984.
Ronald Reagan is the President of the United States.
Footloose, and Beverly Hill Cops are raking it in at the Box Office.
Dynasty, and Family Ties top the Nielsen Ratings.
Just like the rest of Earth G+, Bonnie Tylor is Holding Out for a Hero."


That right there is the key to everything.

Any character created by DC during, or after Crisis on Infinite Earths does not exist in our game. If the character was acquired by DC Comics, and first appears in a DC book during, or after COIE, such as Blue Beetle, Captain Atom, and the other Charlton Characters, they too are not available as PCs.

The 'Satellite Era' Justice League of America, the Teen Titans (Dick Grayson is Robin, not Nightwing), the Doom Patrol (original), the Metal Men, and a number of independent heroes are all cleared for use. 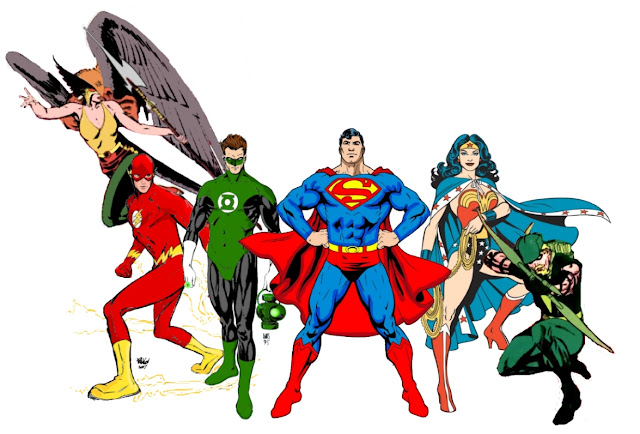 
A day, or two before the session, I posted the following image, and caption to our Event page... 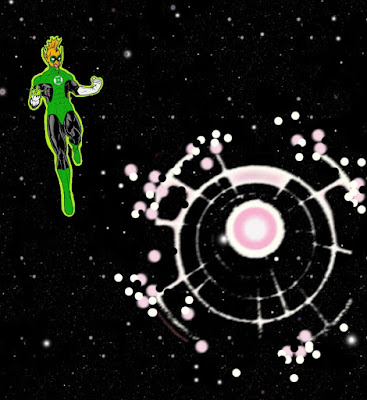 The following morning I posted this...

'A series of strange events, some clearly villainous, some merely suspicious, have kept the Justice League of America rather busy over the past 48 hours.

Flash, and Green Arrow - In the wee hours of yesterday morning, Mark Mardon, AKA Weather Wizard, somehow escaped from the Minnesota State Correctional Facility that held him. Several hours later, a sudden, terrible storm blew over Star City just as a plane extraditing Count Werner Vertaygho of Vlatava, AKA Count Vertigo, had taken off. The aircraft, as well as Count Vertigo himself, have disappeared.

Green Lantern, and Superman - Our heroes have been on the trail of Rudy Jones, AKA The Parasite, for at least twelve hours now. Jones recently escaped from a S.T.A.R. Labs facility attempting to cure his condition. As the heroes neared his last known whereabouts, the Metropolis suburb of Midvale, reports came through that a 'yellow-gold giant with purple clothes' had been sighted in the Delaware Water Gap National Park, about 80 miles Northeast of the city.

Hawkgirl, and Wonder Woman - Yesterday evening, Helen Alexandros, AKA The Silver Swan, stole an ancient, Greek salpinx from the Midway City Museum (The Midway Museum of Ancient History). She was aided by a mysterious man in a blue cloak. The two individuals vanished right before the eyes of stunned security guards. Early this morning, a man wearing a cloak of the same description was spotted in the Suicide Slum area of Metropolis by Ace O' Clubs owner Bibbo Bibbowski.'

A few hours later, I posted this last, additional entry:

'Update: Additional sightings of the Parasite, Silver Swan, the Blue Cloaked Man, and the mysterious Yellow-Gold Giant have been confirmed by various sources, and complied by J'onn Jonzz, The Martian Manhunter, back on the JLA Satellite. According to his findings, they are all headed for central Metropolis, likely the borough of New Troy.

Weather patterns there have begun to change rapidly, and a particularly intense lightning storm seems to be forming. Very likely, this is a sign that Weather Wizard, and perhaps Count Vertigo, are on their way as well.

The important things to note here are that I tried to make sure I had certain vital (IMO) components established:


Also, I established that the Martian Manhunter was there to help in an advisory capacity. This enabled me to give exposition, helpful hints, and the like with an in-game voice (J'onn's) instead of a GM/Narrator voice.

Remember this is all before the first session. This is the prologue. It's...OMG...it's...

Posted by Adam Dickstein at 9:24 PM