The first and last time I ran a Sesame Street RPG session was during the summer of 1981. I was 12 years old and attending summer day camp run by the YM-YWHA in Brooklyn, NY. Our 'camp grounds' were some distance outside the city however in what my failing memory tells me was a heavily forested region of Long Island (in what is today the affluent region referred to as 'The Hamptons').

On one particular summer day, a bus with mechanical problems and a torrential rainstorm caused a significant change in the days planned activities. While campers of my age group when to see a movie, the younger groups of which my sister was a part, stayed under large wooden shelters and did arts and crafts or the like.

Having seen the movie the my group was off to check out, I asked to stay behind and help out with the younger kids. I love kids. Kids and dogs. The average adult Human I could sort of give or take but kids and dogs I like. Anyway...

While watching a group of children between 5 and 7 yawn and roll their eyes at some arts & crafts project I could tell they'd done a dozen times before I lost my usual shyness and blurted out, " "Who wants to play a game?". Once I had their attention I continued with, "Its a Role Playing Game. A...Sesame Street Role Playing Game." 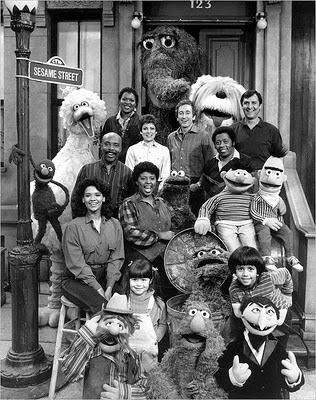 A mix of curiosity and distrust that what I was suggesting would be more fun than the un-fun thing they were already doing covered their faces. Finally, the tense silence was broken when the camp counselor in charge of this little group said, "Wow. How do you play?" I think this helped because a) I knew something the older counselor didn't which in the kids' eyes made me cool and b) boring arts and crafts or not she was a pretty popular counselor so her showing interest boosted my credibility. Plus she was cute and I was 12 so my confidence got an additional power up.

I have each kid take a piece of paper and then I put a bunch of six-sided dice on the table quickly asking, "Does anyone know how many sides these dice have?" Nearly of them piped up with the answer. I then put a handful of 10 siders on the table to astonished looks from a few of them. "How many sides do these have?", I asked. The kids looked at them rolled them and counted until a few said, "10".

Next, I had each 'player' choose a Sesame Street Muppet character. The group chose Big Bird, Oscar The Grouch, Cookie Monster, Ernie and Super Grover. As I mentioned in a previous post, watch out for the kid who chooses Super Grover. He specifically told me, "Not Grover, Super Grover. I want to be able to fly and have superpowers". Don't take your eyes off that one.

The plot was partially based on an old SNL sketch. A crazy villain called 'The Cross Worder' has stolen the letter M. His dialog was...

"Hahaha! I have three simple demands. I want a hundred million dollars, a jet helicopter to escape in and the letter M stricken from the English alphabet! I know one of those things is a little strange for forget the oney if you ust."

The Player Characters than went on a ission...sorry, a mission to retrieve the letter M. Luckily, they had help from various NPCs such a News Reporter Kermit the Frog, Sherlock Hemlock the World's Greatest Detective and a few others.

The main obstacle they faced was that M words seemed to no longer function properly. A Microphone is now an Icrophone and so it doesn't make your voice louder and that sort of thing.

The parts of the game that stand out in my memory most are the Super Grover kid writing Superpowers as his special talent which gave him an excuse to kind of roll a D10 almost all the time. Big Bird's player couldn't think of a special talent and was getting frustrated (she also rolled poorly in general) until I asked her, "Can you think of anything, anything at all, that Big Bird can do that not one else can?" I was thinking, 'reach up high' or 'see over things' but she did one better. Much better. In the final battle for the fate of the letter M she said, "Big Bird calls out for Snuffleupagus." Wow. Trumped by a 6 year old.

Big Bird: "At last! Now you see him and you got to believe me. He's not imaginary after all. I told you all along there was a Snuffleupagus, my best pal. I told you, but you never believed me."
David Robinson: "That's right, Big Bird. We didn't, but..."
Big Bird: "But what?"
Snuffleupagus: "Yeah, but what?"
Susan Robinson: "Big Bird, you have a right to be angry."
Big Bird: "I do?"
Susan Robinson: "Sure, I mean after all this time and we never believed you. That must have been very hard on you."
Big Bird: "Well, yeah."
Bob Johnson: "I'll tell you what, Big Bird. From now on, we'll believe you whenever you tell us something."
Big Bird: "You promise?"
Bob Johnson: "We promise."
Snuffleupagus: "We might want to get that in writing."

I apologize for the Muppets RPG PDF not being finished yet but I've been really busy lately and the art is taking a lot more time than I anticipated. The fact that I'm a bit of a perfectionist, especially when it comes to the Muppets doesn't help. It's coming, it's coming.

I've noticed that once again views are up, off the charts for me actually, though not a single comment in a while. Are you waiting for something? Come on join in the fun! Now's the time. We're talking about gaming Sesame Street for Pete's Sake! Let's stop at Hooper's, I'll spot you for a milkshake.