Down And Out In Fraggle Rock 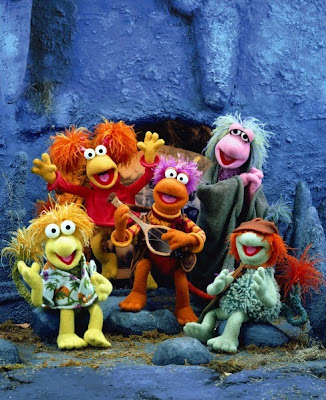 "Dance your cares away, Worry's for another day. Let the music play, Down at Fraggle Rock"

(Flash of light, loud pop echoing off the cavern walls and a 'POOF' of smoke)

"What the...? Where am I? This is definitely not Sesame Street and it isn't the Muppet Theater. Holy Moley...it looks like..."

"Don't be such a boober Boober. It's one of the Silly Creatures from Outer Space my Uncle Traveling Matt is always talking about. But how did he get here?"

"We should hide! No wait, we should talk to it. No, we should go see the Trash Heap and ask her what to do, yeah. Hiding still sounds good though."

"Wembley relax. I'm not afraid of any Silly Creature. I'm going to go see what it wants. (Gulp)."

"Red? Fraggle? This is Fraggle Rock! Wow. I'm a long way from the Muppet Theater. Listen Red, my name is Adam. Can you and your friends help me? You see...I'm lost and I kind of got here by magic and I need to get back to my friends...in Outer Space. Thing is...hmmm...Outer Space is big and I have no idea how far it is from Fraggle Rock to where I need to go."

"It's OK Silly Creature. We can help you. We'll go see the All Knowing Trash Heap and she'll know what to do."


If the Muppets have something akin to old school dungeon delving with that particularly peculiar Muppet twist, it's the amazing universe of Fraggle Rock. Jim Henson conceived the series as a world of bright colors and music that nonetheless functioned based on the somewhat complex symbiotic relationships between the different "races" of creatures that occupied the cavernous region of Fraggle Rock. While most certainly a program aimed at children, the show could entertain and amuse while seriously exploring complex issues of prejudice, spirituality, personal identity, environment, social conflict and death.

In some ways, I've always viewed Fraggle Rock as a bridge between Sesame Street and the Muppet Show. I used to watch it religiously with my younger sister (five years my junior) and we were at ages where we both understood the show but probably got different things out of it. My nephew has watched it and love it as well. I am actually a huge fan of Fraggle Rock and could easily do an entire week just on it alone but I'm going to try to condense my basic ideas here and save the rest for Muppet Mondays.

The website Muppet Mindset has an excellent article on why Fraggle Rock is even better to watch as an adult.

Fraggle Rock has many of the troupes and trappings of more magical settings and less of a modern or science fiction feel. There are mystic oracles, a race of large ogre/giant like creatures called Gorgs, mentions of treasure, magic potions and many other element that work to create a Muppets RPG campaign more in line with traditional gaming concepts. Also Fraggle Rock may be the only major Muppets production where it is implied that characters can die. This would definitely be reflected in the rules of a Fraggle Rock RPG variant.

I would think that scenes work but sketches and skits wouldn't really apply in the world of Fraggle Rock. As we watch the series and see the Fraggles go about their lives and adventures, there is a much less episodic nature to the series over all, with continuity of relationships and events progressing throughout the seasons.

For this reason, Upstaging, Stealing the Show and anything of that nature goes away. Though it may sound very odd, mechanically Fraggle Rock is more like the Land of Gorch crossed with the Sesame Street rules than it is like the Muppet Show.

Props are a definite (the Fraggle Horn, Love Potions, Peas of Power, Gorg Butter, etc.), Costumes rarely apply or matter (many Fraggles are unclothed or only wear a cloak or a scarf) and Playgrounds/Locations/Sets might work if treated a bit more like that building of a base, home or secret clubhouse. 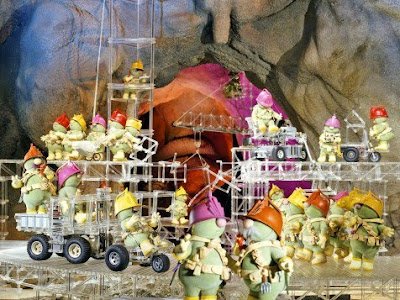 Applause and Star Power become Appreciation and Spirit, reflecting the more spiritual and mystic nature of the show. The more you Appreciate the world you live in, the creatures that live in it with you and the more your fellow creatures learn to Appreciate you, the higher it raises your Spirit.

That right there is my basic philosophy for all game design. You should be able to read one or two lines and get the idea of the game, the mechanics and the atmosphere and still have all the words make sense.

Mini-rant...One of the reasons I'm not a fan of many old school games is very often you accumulate Experience (with you so far) to raise your Level (Level? Level of what?) in your Class (My class? Geometry? Or it is like social class? So my class and level improve from Lower Middle Class to Middle Class? Oh no wait, it's medieval. So I go from Peasant to Merchant or something?). Never understood that. ...Mini-rant over.

Shticks...could pretty much stay Shticks because of the wacky and often oddball nature of Fraggle thinking. In regards to combat, dangerous terrain and the like, all damage is considered to be 'Real'. Nothing is 'Staged' unless a PC or Director run NPC explicitly desires it to be so. Furthermore, if you lose all your Shtick dice due to damage, you lose one Spirit. If your character is at zero Spirit, he or she will be alive but unable to move for an addition 1D6 scenes plus the amount of Appreciation you have. If the other PCs give up five point of Appreciation it is enough to restore you to health and you will be fine for the next adventure. The PCs must be near you (physical contact range) to do this. If this is not done by the time allotted, the character is no more.

Remember too that Fraggle Rock has a bit more established canon than any of the other show's we've talked about so far. I highly recommend checking out the Muppet Wiki for information and of course, watching the show. A Fraggle Rock theatrical motion picture is said to be in the works as well. 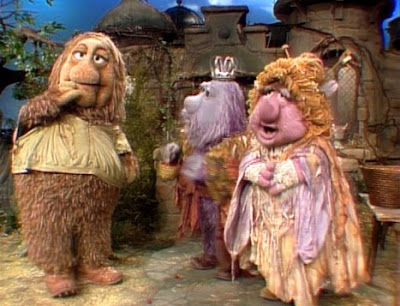 
"Are you guys sure about this. I'm starting to see where Boober is coming from?"

"Don't worry Silly Creature. The Trash Heap gave use very specific instructions. When I say go, tug on Wembley's tail while Mokey, you start singing. Red, you hop up and down on one foot while Boober reads the latest postcard from my Uncle Traveling Matt. Everybody ready?"

"Hold on. Every Fraggle knows it's unlucky to tug your tail. It will bring death and pestilence remember?"

"I hope he went where he needed to go. He seemed like a nice Silly Creature."

"Sprocket you funny dog. Get away from that hole. We've got tickets to the Muppet Theater tonight. I want to get there early and get popcorn. Come on, it's a 30 minute drive."