It's Time To Meet The Muppets - Part 2

"Agreed Beaker. I couldn't have put it better myself."

"Well...there's smoke coming out of his head." 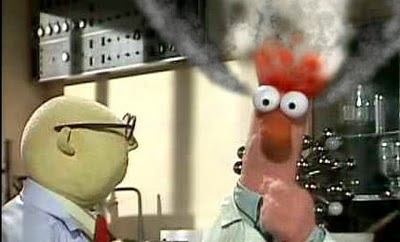 "Oh that. Yes. Occupational hazard I'm afraid. More importantly though Beaker wants to make sure he is understanding the rules of your Muppets RPG correctly. Any chance you'd be so kind as to give us a demonstration of character creation?"

Let's say I'm making up a Muppet character for a Muppet Show campaign. I decide I want to play a Beaver or Woodchuck who is a carpenter and makes sets for the show. He is also a bit of a handy man and general fix it guy for when things break down. 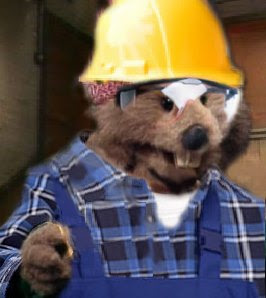 Now a name. Ernest. It's both descriptive of how I see him deep down (an honest, hard working, regular guy just trying to do his job. If that regular guy were a beaver.) and just seems to fit his look.

Now I need some Shticks. The first one is easy...Beaver. I want him to be able to build and fix things so...Mr. Fix It. Now I occasionally want him to be able to pull the 'I'm on break' and 'Not in my contract' routines so I'm giving him Union Guy. Finally, I want him to get along with most of the people on the cast and enable him to fit in with the guest stars so I give him Regular Joe.

OK, so Ernest the Beaver has the Shticks Beaver, Mr. Fix It, Union Guy and Regular Joe.

I pass the character to the other players and these are the ratings I get on a scale from 1 to 5.

Fozzie wants everyone to be happy and is a bit of a pushover. Miss Piggy is very critical.

So, I talk to the players and ask a few questions about their scoring. Most say I should've drawn him holding a tool to get higher Mr. Fix It scores. Also, Union Guy is hard to depict (maybe he should have been eating his lunch or something to bring out that 'I'm on break' feel.).

OK, so I score myself...Beaver-5 (Dude looks like a Beaver!), Mr. Fix It-3 (I get where they're coming from but I want him to be able to fix stuff and he's wearing safety goggles. Safety goggles for crying out loud!), Union Guy-2 and Regular Joe-4.

The final results are tallied and averaged by the 4 players (Fozzie, Piggy, Rowlf and myself). Fractions are rounded up.

Now all this information has so far focused on creating a Custom Muppet. So how do you create a Whatnot Muppet? Easy...

First, Whatnots are limited to only two permanent Shticks, the first usually being what they are if they are anything of note. Many Whatnots are generic 'people' but there are Whatnot monsters, pigs, dogs and frogs to be sure.

The Whatnot then gets three Shtick Slots for Temporary Shticks. Temporary Shticks are only obtained by entering a scene or sketch and disappear soon after. Sometimes it's as soon as the sketch ends, however if the character is encountered in a backstage scene immediately following a sketch it will retain its Temporary Shticks.

When encountered randomly or suddenly approached by another character, bear in mind that the Whatnot has no Shticks other then its basic two and its Slots are empty.

Additionally, a Whatnot receives 15 Dice toward Shticks. They do not go through the 'creative process' of being considered by the Muppet Performers that a Custom Muppet goes through.

Finally, though there will be additional notes on this in the next post, the Custom Muppet starts with a Star Power of one (1). A Whatnot starts with no Star Power.

"What a jip. At least there's a chance of bein' a star though. I mean I did it. Heheh."

You are correct Rizzo. Some Whatnots, if they are about to attain Star Power can eventually change to a Custom Muppet. Rizzo the Rat and even Miss Piggy to some extent did this.

Next up, Props, Costumes and Rule Mechanics for running the game.

Kermit: A tap-dancing chicken act? Gonzo, I've never heard of anything as ridiculous as a dancing chicken.
Gonzo: How about a talking frog?

I have slightly changed my original schedule of events for the month. So far it's shaping up as follows:

The image of 'Ernest the Beaver' was made from Harvey Beaver, a character in Emmet Otter's Jugband Christmas. It was combined in photoshop with various stock photographs of carpenters and construction workers. It took less than 10 minutes to produce.

Originally Miss Piggy was created to be a background chorus singer who was only prominent in one sequence in the original 1975 Muppet Show pilot episode, The Muppet Show: Sex and Violence (Yes. That really was the title. Look it up. Here's proof via a screen capture that later appeared in the follow up second pilot, The Muppets Valentine Show).

Posted by Adam Dickstein at 1:14 AM