Why Don't We Get Things Started - Part 1

Why? Because we're not quite done with the rules just yet. We need to cover a few more crucial factors. Among them, Conflict, Scenes and Sketches and Routines. I've brought in a few friends to help me so we can get this all squared away. Come on in gang... 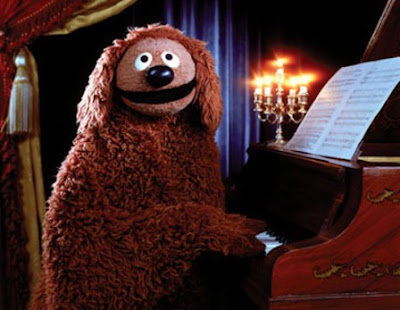 I have decided, based on an observation by Velaran, that I am going to call the action where a PC can spend 5 Stars and take over a scene 'Stealing The Show'. This is a cool sounding name and avoids confusion with the action 'Upstage'. Thanks Velaran! 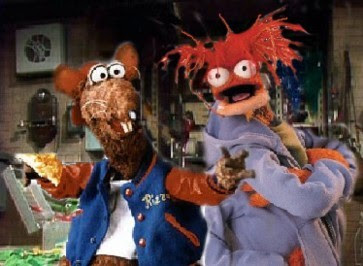 "The Muppens are no strangers to fighting, okay. There are times when jou got to show the other fellow who is boss, okay. Of course, I am a King Prawn and a lover not a fighter."

"Back in my old neighborhood in Brooklyn we knew how to handle ourselves. Fights came our way all the time and we had to take care of business."

Sometimes you just have to zap, smash, karate chop or eat the other guy to get your point across. In the universe the Muppets live in, that sometimes is fairly often.

To this end there are rules included for conflict. Some conflicts are of a physical nature but it is also possible to use these same rules and mechanics for getting heckled, a staring contest or anything else where two or more opponents are in direct confrontation.

At the beginning of any Conflict, determine if it is 'Staged' or 'Real'. Staged combat is part of the act, designed to make the scene more exciting and does no permanent damage of any kind. Most Muppet conflict is Staged. If Big Mean Carl eats Bean Bunny in the next sketch, Bean will still be around for the big finale. On the other hand, Real combat means that one opponent defeats another in the Muppet universe, not just in an entertaining skit. Of course, this being the Muppets, the character is not actually dead or permanently gone but is removed from the rest of the session. The character will reappear next session as if nothing happened.

Remember the previous entries on the rules? End with no Stars for three consecutive sessions and they don't use that Muppet anymore right? Well if you are Upstaged too many times in Conflicts (in other words, you lose a battle against another PC) you may get retired.

To determine who gets to go first figure out which Shtick you are using to attack your opponent (both sides do this. At the begin of a conflict no one is considered to be defending. Both would start out attacking. If one character refuses to engage in a conflict then and only then would you use a defensive Shtick that's appropriate.). Whichever character has the higher rated Shtick goes first. If the Shticks are equal, roll them and see who gets the highest success(es).

As stated in my previous post, when two characters are in conflict the highest success wins out. Now in conflicts the difference between the more successful character and the less successful one is the damage the winner inflicts on the loser.

Dr. Phil Van Neuter attempts to sedate Animal. Van Neuter sneaks up behind the wild drummer, or so he thinks and gets ready to give him a shot of 'Sleepy Juice'. Unfortunately for the doctor, Animal smells him and spins around.

Dr. Van Neuter has a Perform Unnecessary Experiments Shtick of 4.
Animal has a Eat Shtick of 4.

Animals lounges at Van Neuter to bite his arm. He rolls his Eat and gets 2,2,3,6. Animal's dice are hot tonight. Van Neuter attempts to dodge with Absent Minded Professor Shtick of 3 (his player stretches the definition saying that at the last second Van Neuter turns sharply, uncertain if he left his fusion reactor running at home). Van Neuter is out of luck, rolling 1,2 and 2.

Since Animal rolled a 6 and Van Neuter's best was a 2, Animal gets to gnaw on the mad scientist's forearm for 4 Dice of Damage.

What 4 Dice of Damage means is that 4 Dice are taken away from an opponent's Shticks. While the idea here is similar to Risus, it's not necessary to only remove the dice from the Shtick being used in combat. I prefer to spread them out a bit. So in this case, Dr, Van Neuter would subtract -2 from his Absent Minded Professor and -2 from his Perform Unnecessary Experiments or -1 from four different Shticks or some other combination of 4. If a character has no dice in more than half his Shticks he is defeated. He is considered knocked out (or burnt to a crisp or eaten or blown up, etc.) for the rest of the scene or sketch.

Those are the basics of conflict. I may expand on them a bit later, especially as they relate to various acts of Muppet Logic and Physics.

Next Up: Scenes, Sketches and Skits with Fozzie Bear!

Rowlf the Dog: You bet. I finish work, I go home, read a book, have a couple of beers, take myself for a walk and go to bed.

This is more work and attention than I have paid to a set of rules in years. Seriously. I intended to be done with the rules in the first 5-7 days of starting this project thinking that, a) there wouldn't need to be many rules and b) I really want to get to the fun part of explaining how to run a Muppets adventure or even a campaign. Then a funny thing happened. I recalled how much I like these rules. I think this is some of my best work mechanics wise. That's not saying much I guess since I'm a rules lite kind of guy but I like these rules because, well, they don't bore me. They're fun IMHO. They add to the atmosphere and feel of the game. Isn't that what rules for a game are supposed to do?

Rowlf makes a cameo here but trust me, we'll see more Rowlf coming up. I love Rowlf. I guess it's the dog lover in me but that guy is just awesome. I see him sitting at a table on Friday nights playing poker with Ben Grimm and Scotty from Star Trek. A couple of beers, some pizza...good times, good times.